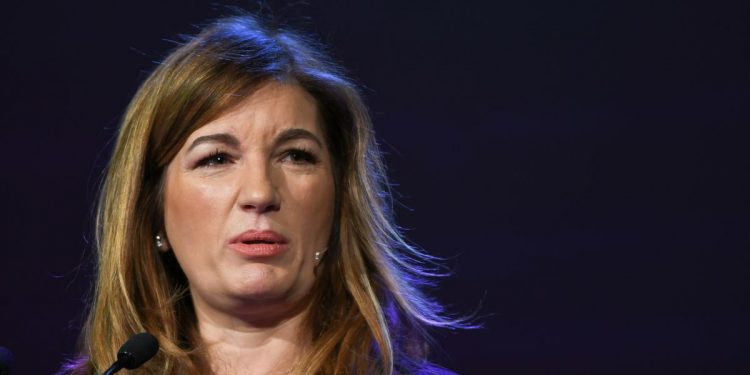 
The Apprentice’s Karren Brady has launched a scathing rant on Prince Harry as she called him a “laughing stock” and a “bad joke” over his recent decision to withdraw from his grandfather Prince Phillip’s memorial.

The entrepreneur, 52, slammed Harry and wife Meghan’s move to withdraw from the ceremony on Tuesday, March 29.

Karren, who is an aide to Lord Sugar, went in on the former royal couple during an interview with The Sun.

She said: “From a man who decided that his new job was to be a moral guardian, playing fancy dress right now makes him seem completely out of touch.”

The star continued: “He wants to be seen as a caring crusader, but in leaving the UK the prince has lost touch with one of the most significant characteristics of being royal and that is… dignity.

“Right now, Harry should be reading the room and the global crisis that the world is facing and behaving accordingly.”

It comes after Harry was filmed learning Dutch ahead of the Invictus Games.

Reports over the weekend suggested the Prince could actually attend the Academy Awards instead of the Duke of Edinburgh memorial.

He pulled out of the memorial amid a public fallout over a lack of police protection for his family.

Harry quit royal life to move to Los Angeles with Meghan, their son Archie and daughter Lilibet. The act was dubbed “Megxit” due to his wife.

Meanwhile, The Apprentice final airs this week on BBC One.

In last week’s episode, Brittany and Stephanie went home in a double elimination.

During the tough interviews stage, Brittany, Harpreet, Kathryn and Steff were faced with direct questions about their business plans, with Claude issuing the candidates with some incredible one-liners.

Upon consulting the four experts, Lord Sugar decided to send Brittany home – wishing her the best of luck going forward.

Brittany – who was pitching a high protein alcoholic drink business – was reduced to tears when Mike Soutar pointed out a huge flaw in her business plan, but she lied to her fellow candidates when they asked her if she had teared up during the interview.

“You’re a very intelligent young lady,” Lord Sugar later told her in the boardroom. “But you still back your ideas even when they’re bad.”

Alan then turned to her co-star Stephanie and said: “The pre-loved is not a market that is loved by me, you’re fired.”

Harpreet and Kathryn will battle it out on Thursday for the season finale.

*The Apprentice final will air on Thursday at 9pm.