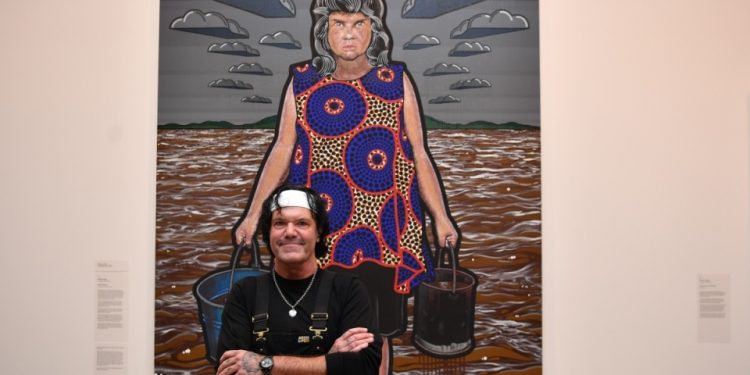 Mr Dickens, a Sydney artist with Dhungatti heritage, depicted Karla Dickens, a Wiradjuri artist, in the recent floods that devastated the community in her hometown of Lismore in northern NSW.

“Karla is my favourite female First Nations artist, we are dear friends, we are birds of a feather when it comes to our sentiment in art, and I really admire the way she pieces together her work.

“It just happens that I was there in Lismore immediately after the first deluge in January and saw the shock and horror on people’s faces.

“Karla had just reached a pivotal point in her career and almost immediately the flood catastrophe happened.

“When she should have ordinarily been excited about where her career was going, she was harbouring three families in Lismore as part of her own rescue mission.”

Douglas is a five-time Archibald finalist and was also a finalist in the Wynne Prize in 2009.

He was among 52 finalists whose work included portraits depicting Hollywood actor Hugh Jackman and former politician and Midnight Oil frontman Peter Garrett among others.

A self-portrait by last year’s winner Peter Wegner, a seven-time finalist from Melbourne, was also in the running.

This year’s Sulman Prize was awarded to Claire Healy and Sean Cordeiro for their work titled Raiko and Shuten-doji. The duo will receive $40,000.

The $50,000 Wynne Prize was awarded to Nicholas Harding for his Eora painting.

The award recognises the best figurative sculpture, or the best landscape painting of Australian scenery.

The Archibald Prize has been awarded annually since 1921. This year’s competition drew a record number of entries from Aboriginal artists and the highest number of Aboriginal finalists across all three competitions.

More than 1900 entries were received for the Archibald, Wynne and Sulman prizes.

The Archibald is regarded as one of the nation’s most prestigious art awards and depicts anyone from politicians, celebrities, athletes and artists.

Sydney artist Claus Stangl, who created a 3D portrait of Kiwi film director Taika Waititi, took out the $3000 Packing Room Prize last week. It is awarded by gallery staff who receive, unpack and hang the portraits.

All finalists will be exhibited at the Art Gallery of NSW from Saturday until August 28.