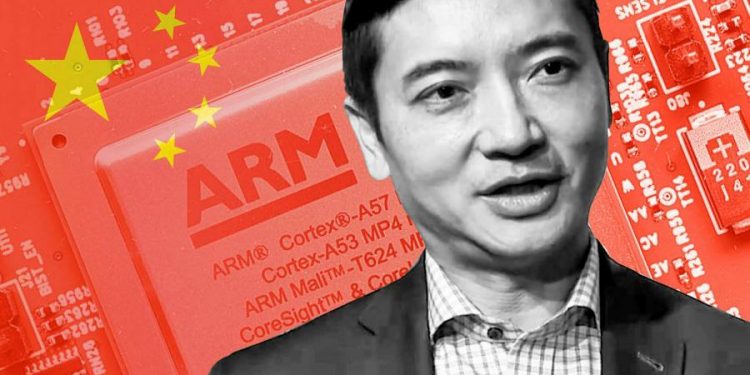 SoftBank unveiled plans to float UK chip designer Arm this week, but it has already run into rocky waters.

Rene Haas, the incoming Arm chief executive, will soon have to sort out the protracted legal tangle with the chief of its joint venture in China, Allen Wu.

A court filing obtained by the Financial Times shows Wu has launched a third legal case against Arm China. Wu has been trying to maintain control over the business after disregarding a 7-1 vote in 2020 to remove him from the board.

Wu is the joint venture’s legal representative and holds its “chop” — or company seal, through which official documents are authorised — making him difficult to oust because of centuries-old Chinese rules. He has previously hired a security team to deny Arm staff entry to their Shanghai offices and installed an email filtering system to hide messages from HQ.

In the latest legal case, Wu has tried to get himself reappointed to the board, according to two people involved in the situation. SoftBank did not respond to requests for comment.

This challenge could stall Arm’s IPO on New York’s Nasdaq exchange, SoftBank’s next step for the company after a proposed merger with Nvidia was scrapped following regulatory concerns from the US, UK and EU over competition.

Continuing disputes with Wu have meant that Arm has been unable to verify its revenues from Arm China, it warned. Against a backdrop of hostile competition for chips globally, the situation means investors could struggle to value Arm’s business.

An Arm China spokesperson speaking on behalf of Wu and the company said they continue to provide financial information to Arm and that it “is a key contributor to the growth of Arm’s business”.

“We are fully supportive of Arm’s IPO plan as its long-term China partner and value contributor,” the spokesperson said, declining to comment on legal matters.

1. Israeli outrage over Pegasus spyware
Three top civil servants in Israel have written an open letter to the government expressing their “emotional tempest” at having their “personal and professional worlds” exposed by Pegasus spyware, Mehul Srivastava reports. The flagship product by Israel’s NSO Group has come under international scrutiny but this is the first time it has been embroiled in a domestic scandal.

2. Publishers file EU complaint against Google
Google’s adtech business is being challenged again after big media publishers lodged a complaint today with the European Commission, Javier Espinoza writes. A body that includes the New York Times, the Guardian and the Daily Mail has asked the EU to hold the tech giant “accountable for its anti-competitive conduct”. Google denies any wrongdoing.

4. Apple increases privacy measures on AirTags
Apple has increased privacy measures on its AirTags, following reports the devices are being used to stalk people. According to some complaints, they have been used to track people without consent. Apple said it is co-operating with law enforcement and has added warnings and a louder sound, to alert people sooner to a potentially unwanted AirTag nearby.

5. Meals in the metaverse
Dining with a headset on might sound messy but it is rather fitting for this week’s Lunch with the FT. John Thornhill speaks to techno-philosopher David Chalmers in a virtual restaurant in the metaverse (at least they had some real sushi to eat).

Snap today announced the launch of its “Hidden Black Stories” project which, in partnership with the Black Cultural Archives, allows users to explore black history through augmented reality. Spots in Trafalgar Square can be scanned to generate graphics and information about historical figures including Nelson Mandela and two black boxers, Bill Richmond and Tom Molineaux, who lived in the 1700-1800s, while work from black artists will be digitally hung in the National Gallery. Those unable to travel to London can still access the virtual Mandela statue through Snap on their phones.

How Best to Fight Hair Loss in Men