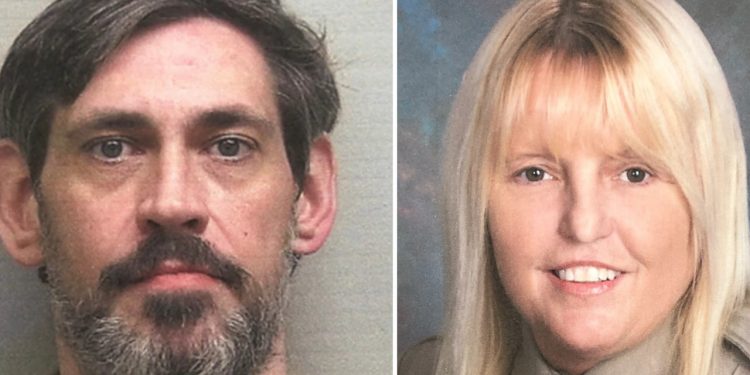 Updated at 10:33 a.m.: A felony arrest warrant has been issued for the Lauderdale County assistant director of corrections that has been missing with an inmate charged with capital murder, Sheriff Rick Singleton said at a Monday morning press conference.

The charges related to Vicky White involve assisting the inmate, Casey Cole White, escape from the jail, Singleton said. The charges are permitting or facilitating an escape in the first degree, a Class C felony punishable by up to 10 years in prison.

Singleton said he believed Casey Cole White’s escape was “orchestrated” and that Vicky White played a role in that orchestration.

“Nobody saw this coming,” Singleton said.

Singleton again warned that Casey Cole White, who is 6-feet-9-inches tall, is “an extremely dangerous person” and even urged law enforcement officers who may encounter him to use caution.

The sheriff said Vicky White said she was transporting Casey Cole White alone to the nearby courthouse for a mental health evaluation and given her position of authority at the jail and her experience, other corrections officers did not question her even though it did not comply with policy.

“Protocols were in place,” Singleton said. “We have a policy. It requires two deputies to transport. This leads us, again, to believe it was orchestrated because we had two vans of inmates leave just minutes before Director White had Casey White brought up front. Both of those vans had two deputies on them. One have five inmates, the other had seven inmates.”

Minutes after those vans left the jail, Vicky White instructed another officer to prepare Casey White for transport. He was placed in handcuffs and leg shackles, Singleton said.

Singleton said a review of surveillance video revealed that Vicky White and Casey Cole White, who are not related, drove directly from the jail to Florence Square shopping center at Huntsville Road and Cox Creek Parkway. Vicky White’s patrol car was spotted on video at the shopping center about eight minutes after leaving the jail.

Singleton said it is believed Casey White was laying in the backseat of the patrol vehicle to avoid detection until they arrived at the shopping center and changed vehicles.

Marty Keely of the U.S. Marshals Service said that the escape has escalated to a “major case,” which unlocks resources that will be utilized in the search for the suspects.

Information should be relayed by calling 911, Keely said.

The public should not approach either suspect, Keely said.

“We consider both of them dangerous,” he said.

Original story: Vicky White, an assistant director of corrections at the Lauderdale County jail, and Casey Cole White, a man who was incarcerated on capital murder charges, have been missing since they left the jail Friday morning.

In an interview with Birmingham TV station WBRC, the sheriff said Vicky White had turned in her retirement papers on Thursday and Friday was to be her last day.

“There’s no question she assisted in this escape,” the sheriff said, though it is unknown if she did so willing or because she was coerced.

“We won’t know for sure what the situation was until we get a chance to talk to director White.”

This article will be updated with information from today’s press conference.

Here is what we know so far:

The U.S. Marshals Service is offering up to $10,000 for information leading authorities to the pair.

Information can be provided at the USMS Communications Center at 1-800-336-0102. Anonymous tips may also be submitted via the U.S. Marshals Tip App.

“Casey White is believed to be a serious threat to the corrections officer and the public,” said U.S. Marshal Marty Keely.

“Do not attempt to apprehend this fugitive,” said Keely.

The two have been missing since they left the jail Friday morning at 9:41 a.m. The two are not related.

Before they left the jail on Friday, Vicky White told jail employees to prepare Casey White for transport to the county courthouse for a mental health evaluation, the sheriff said, though no such court appearance was scheduled.

Two vans left to transport inmates to the courthouse that morning, Singleton told WBRC, and minutes later Vicky White told workers at the jail to bring Casey White to her. Since all other deputies were busy, she said she would take him herself.

The two never arrived at the courthouse, which is located in downtown Florence, about a half mile from the county jail.

At 11:34 a.m., about two hours after the pair left the jail, a Florence police officer saw White’s patrol vehicle. It was parked among vehicles that were listed for sale. The officer, like other law enforcement, was unaware at the time that officer White and Casey White were missing.

At 3:30 p.m., a jail employee reported to the administration that she had been trying to contact deputy White but the calls went directly to voicemail. The employee also reported that Casey White had not returned to the jail.

After law enforcement announced that the pair was missing, according to the sheriff’s office, a member of the public reported seeing the patrol vehicle in a shopping center parking lot. Deputies searched the vehicle but did not find any evidence.

By 5:30 p.m., about 20 local investigators were working on the case, reviewing surveillance video from the courthouse, jail, shopping center and other locations.

Singleton said the two might have left in another vehicle but they do not have a description of that vehicle.

Who is Vicky White?

Singleton has said Vicky White had been “an exemplary employee” during her 17 years with the sheriff’s office before violating policy by traveling alone with a prisoner. Two sworn deputies are supposed to escort incarcerated people.

Singleton told WBRC this was the first time he had known of her violating policy in that time.

Vicky White’s mother, Pat Davis, told WAAY TV that even if her daughter helped the inmate escape, she should turn herself in before she gets hurt.

According to Davis, Vicky had been living with her for the past five weeks, ever since Vicky sold her house. Davis says her daughter didn’t speak about work often, never bringing up retirement and never mentioning inmate White in conversation.

”You know, I never heard of him, never seen his picture, nothing. I didn’t know anything about him,” she says.

“She’s never done anything, I bet she’s never even had a speeding ticket. But I mean, she’s always been what I say a good person. And like I say, this is all a shock,” Davis told the station.

Why was Casey White in jail?

In 2020, Casey White was charged with two counts of capital murder for the Oct. 23, 2015 murder-for-hire slaying of Connie Jane Ridgeway.

Rogersville police found Ridgeway’s body in the living room of her apartment after a neighbor requested a welfare check. The 59-year-old woman lived at Meadowland Apartments on Prince Drive in Rogersville, across the street from Lauderdale County High School’s football field.

Ridgeway’s son, Austin Williams, told WHNT he was shocked by news of the escape.

“Someone really needs to find out how this happened,” Williams told the station.

“Someone really needs to look into that and make sure it can’t happen again because we really would like to see him go to trial.”