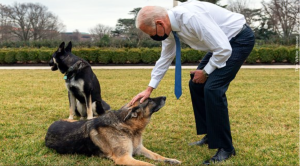 DERBY, Connecticut (WFSB) — Two people were arrested for shooting a German Shepherd in Derby, according to police.

Derby police said they found the dog at the Derby Picnic Grove on Nutmeg Avenue on April 1 around 2 a.m.

“The dog sustained several gun shot wounds and was treated locally,” they wrote in a Facebook post.

Police said they had been looking for the dog’s owner as well as any information as to the circumstances of this incident.

They identified Perrin and Singletary the evening of April 1.

Police described the dog as a male, black and brown in color, and likely 8 months to 2 years old.

They said it was in stable condition.

“He sustained at least two gun shot wounds despite multiple shell casings located at the scene,” police said. “One bullet shattered his front leg and another is still embedded in his shoulder. Unfortunately he is not chipped.”

According to police, Perrin called police at approximately to report an injured German Shepherd at Coon Hollow Park. Singletary was in the vehicle along with Perrin’s two minor children.

Investigators said it was revealed from multiple sources that Perrin and Singletary were recently homeless, living out of their vehicle, and were in possession of a male German Shepherd matching the injured dog’s description despite both denying they owned a dog.

Video surveillance showed Perrin’s vehicle arriving in the area of the park more than an hour before the report about the injured dog. Ten 9mm shell casings were recovered at the scene. Perrin, who is legally licensed to carry a firearm, was later found to be in possession of two 9mm handguns. The ammunition was consistent with the casings recovered at the scene.

Neither have prior animal cruelty charges.

Reports from animal control stated that the dog’s surgery had no complications and they were working toward placing it in foster care.

Matthew Fernandes, who said he lives down the street from the Picnic Grove, said police stopped by Friday morning to ask if he heard anything or had surveillance video.

“If you were defending yourself, you would stay, you wouldn’t run from the situation,” Fernandes said. “Call the cops, figure out what is going on and get people involved. But if you shoot a dog and don’t tell anybody, obviously you’re in a bad position.”

“I think whoever shoots a defenseless animal is a coward, there are so many options to walk away. We speak for them. They don’t have a voice,” local dog owners Heidi and Dave told Channel 3.

The department said that those who looked into offering rewards for the arrest and conviction of those responsible were asked instead to contact the Shelton Animal Control at 203-924-2501 and press 1 if they’re interested in helping with the medical costs.

Anyone with information about the investigation is asked to call the Derby Police Department.

Please note: This content carries a strict local market embargo. If you share the same market as the contributor of this article, you may not use it on any platform.

The brakes on electric production