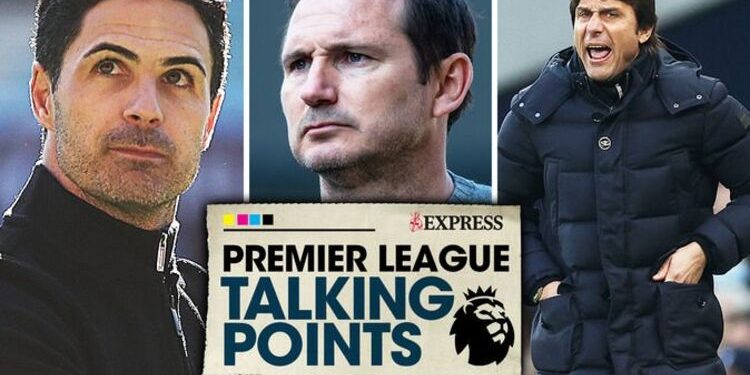 
Arsenal used the magic of the FA Cup to sneak another win under the radar but the real trick is they haven’t beaten anybody significant yet. Antonio Conte seems to beat up on his own team more than any others, but the first back-to-back win since Boxing Day shows perfect timing.

Everton, on the other hand, began the weekend dreaming of Wembley on a sunny afternoon and must now spend the rest of the season fearing Kenilworth Road on a wet Tuesday night. Express Sport takes a look at the top Premier League talking points.

MIKEL ARTETA A ‘MARVEL’ AT ARSENAL

Mikel Arteta is turning himself into some sort of comic-book hero at Arsenal for the ease with which he is beating the bad guys. The bad news is that if Arsenal want to finish in the top four they have to beat the good guys as well. However, to put it into the cartoon vernacular, the Spaniard does not have a Scooby-doo.

The Gunners have been relentless in putting to the sword the weaker teams in the Premier League, drawing with the battlers and losing to the so-called ‘big six’.

So called because the only win against the top teams came against Spurs when they were close to rock bottom under Nuno Espirito Santo at the end of September.

Now Spurs are big again under Conte and join Chelsea and Manchester United among the top-level teams Arsenal must play in the run-in.

Unless Arteta can find the formula suddenly to beat top oppositiion, that could be nine crucial points dropped and a top-four place lost. And the so-called ‘process’ under Arteta will remain an illusion.