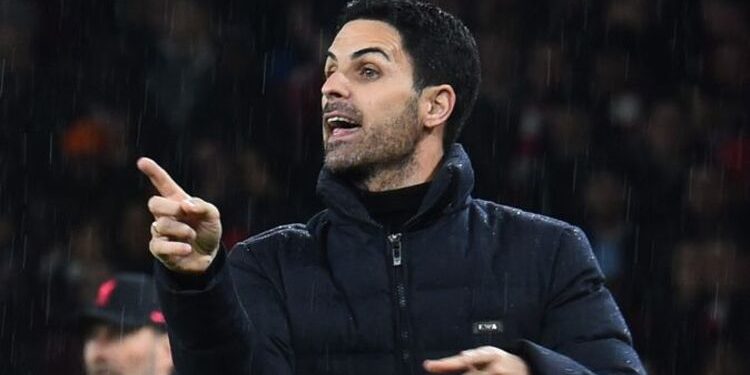 It was a game of few chances, and the first half ended goalless after Liverpool registered the only shot on target of the opening 45 minutes. Only four such shots followed, and Diogo Jota struck gold with his sole effort on 54 minutes, firing a fierce effort below Aaron Ramsdale to open the scoring.

Arsenal struggled to respond after the Portuguese forward broke the deadlock, and Roberto Firmino’s 62nd-minute strike killed the game off. The Gunners remain one point above Manchester United in fourth but still have two games in hand.

Before Jota opened the scoring, Martinelli, who ran Trent Alexander-Arnold ragged for most of the evening, went close after finding his way through with just Alisson to beat. And on 52 minutes, Odegaard failed to profit from Thiago’s gift of a backpass, rushing his effort whilst in space and Alisson brilliantly denied him.

After full-time, Arteta pinpointed Martinelli and Odegaard’s squandered chances as he explained how Arsenal lost the game ‘in the boxes’. He told BBC Sport: “From box to box, we did everything that we’d planned. What happened in the boxes was a different story. That’s where we lost the game.

“We had two big moments. Gabriel Martinelli goes all the way through to the goalkeeper, and then Martin [Odegaard] had a big chance. You have to be ahead. When you concede the goals we conceded, it becomes really difficult to win the game.”

But Arteta made sure to praise his side’s performance, with their top-four bid still looking in good shape, despite Tottenham Hotspur’s win at Brighton & Hove Albion.

READ MORE: Chelsea have their own Van Persie in star who Ferdinand loves watching

And the Spaniard expressed that the Gunners will be ready to take on Aston Villa on Saturday as their pursuit of Champions League football continues.

He added: “I think the whole team played fantastically well. I don’t think the result reflects the performance, but in the box, they had the decisive moments. They put the ball in the net twice. [The top two] have set other standards again this season.

“To cope with that, I have to congratulate the team, but we’re here to win football matches and today we didn’t do it. Mentally we’re ready [for the next game]. Saturday against Aston Villa will be a very different game, but a very difficult game.”

Want the latest Premier League news as we publish it on Express Sport? Join our brand new Facebook group by clicking here.