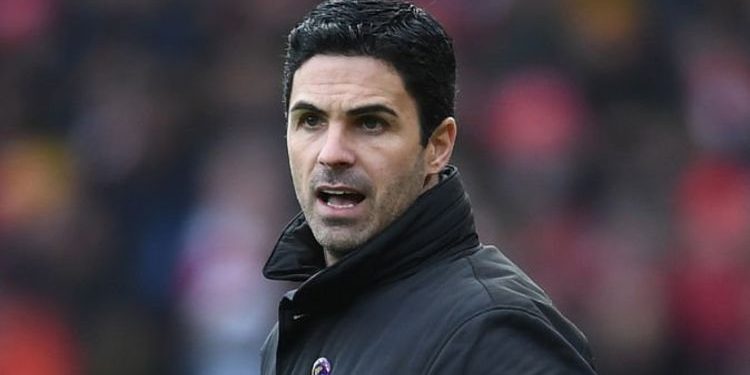 
Arsenal manager Mikel Arteta has come out swinging after a wave of criticism followed the club’s approved request to postpone Sunday’s north London derby. The Spaniard passionately defended the decision, which divided opinion among fans, before the Gunners’ Carabao Cup meeting with Liverpool on Thursday.

Numerous factors have seen Arteta forced to work with a depleted squad in recent weeks.

The likes of Thomas Partey, Nicolas Pepe and Pierre-Emerick Aubameyang have all been away at the Africa Cup of Nations [AFCON], with a host of other stars out injured.

What caused controversy, however, was the club’s decision to sanction the exits of Ainsley Maitland-Niles and Folarin Balogun earlier in the January transfer window.

Since their request to postpone Sunday’s derby was approved for not having the requisite number of players, they also saw two further departures in Pablo Mari and Sead Kolasinac.

Fans, particularly those affiliated with Spurs, also took issue with the fact that Martin Odegaard is Arsenal’s only known Covid case – something confirmed again by Arteta on Wednesday afternoon.

The Spaniard also said: “We will defend our club with teeth and nails.

“We’re not going to get anybody damaging our name or trying to spread lies.

“We didn’t have the players necessary to put a squad in a Premier League match. That is 100% guaranteed.

“When we played the first three games of the season we were killed because people said we were naïve don’t play with your kids.

“We know we did the right thing. We worked with the Premier League and the FA to make that decision. If anything we’ve been very honest at least.”

Arteta’s staunch defence comes after Conte’s own eyebrow-raising comments on Tuesday, where he effectively warned against a worrying precedent which could be set by the Premier League’s decision to postpone the match despite just one Covid case.

“If the Premier League decides to postpone games for injury, it means that maybe they have to try to make a best schedule and to reduce many to play games,” he vented.

“This the first time in my life that there is a league that has postponed the game for injuries. It is very strange and surprising.

“It is a mess now, this is the truth.

“We have found the Premier League very strict when the outbreak happened in our training ground and they did not want to postpone the game against Leicester because before the Burnley game was postponed by snow. Then all this happened.

“You have to laugh because they have totally changed the vision.”