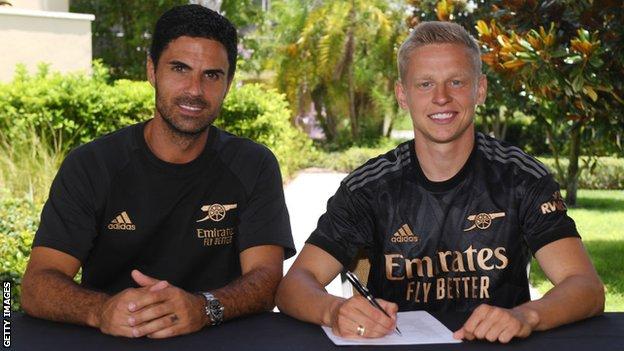 The 25-year-old flew back from City’s pre-season tour of the USA to complete the move after Arsenal agreed a £30m deal, which includes £2m in add-ons.

He has signed a long-term contract with the London club and is their fifth signing of the summer.

“This is a boyhood dream come true, because I was a massive fan when I was a kid,” said Zinchenko.

“Since Thierry Henry and young Cesc Fabregas was playing here, I was just enjoying watching those games, that Arsenal. And obviously I started to love this club, so I am so excited and I cannot wait to play for this amazing club.”

‘A hope and smell for titles’

Predominantly a midfielder for his country, Zinchenko largely featured at left-back for the Blues, but only played 15 times last season as Pep Guardiola’s side retained the Premier League title.

He says he has spoken to Arsenal manager Mikel Arteta about his role in the team but would keep the details “private”, adding: “If the manager tells me one day I need to be goalkeeper, I will be there.”

Zinchenko worked with Arteta when the Gunners’ boss was on the coaching team at Manchester City and says the experience played “the most important role” in his decision to move.

“Since the first day at City I knew that he’s going to be a very good manager,” Zinchenko added.

“Even from the last season, I was watching Arsenal’s games and I could smell it’s coming, you know? The team is growing up so quickly and I think it’s time. It’s time to do our best and to achieve something big.”

Zinchenko is the second player to move from City to the Emirates this summer.

Technical director Edu said Zinchenko had been a “main focus” in their recruitment and backed the new recruit to help the squad reach a “different level”.

Manager Arteta added: “Alex is a high quality player who will give us options and versatility.

“He’s a player that I personally know really well and continued to follow him after my time at Manchester City.

“It’s not only about the positions he can play but as well, the versatility he will give us in attack and defence.

“Alex is a person with great human qualities and character, and I’m delighted that everyone has made this huge effort to bring Alex to the club.”

Find all the latest football transfers on our dedicated page.