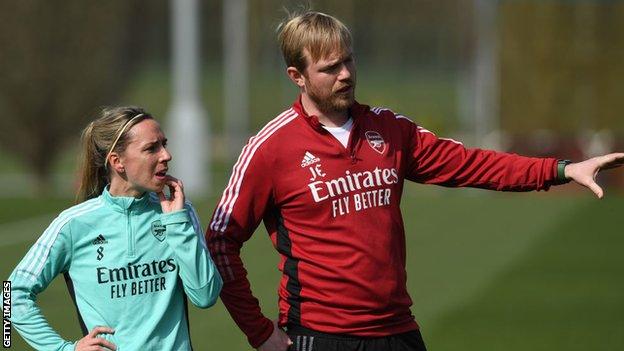 
Arsenal boss Jonas Eidevall is expecting his side to face a new challenge when they host Wolfsburg in their Champions League quarter-final first-leg match at the Emirates on Wednesday.

The Women’s Super League leaders are aiming to reach the semi-finals for the first time since the 2012-13 season.

However, Eidevall knows Wolfsburg will pose a tough test for his side.

“They play differently to the way the teams we usually play do,” he said.

As well being top of the WSL and in the quarter-finals of the Champions League, Arsenal are also into the Women’s FA Cup semi-finals.

Swede Eidevall added: “It is great we are in this position in the three different competitions we are in.

“We are in these positions because we want to push for trophies. We are happy with the opportunities we have but nothing has been achieved yet. Now it is up to us to do it.

“But our style of football, I don’t think Wolfsburg have been exposed to that either. So that excites me.”

Eidevall said he will work with Rafaelle Souza and Mana Iwabuchi “until the last minute” to determine whether they will be fit to face the Germans.

“We played Chelsea and we saw how high the level was,” said Wolfsburg boss Tommy Stroot. “It’s all about individual quality in pretty much every position and they got some new players in the winter break. We have to be very careful.

“These are the moments why we do all this – great teams, great atmosphere.”