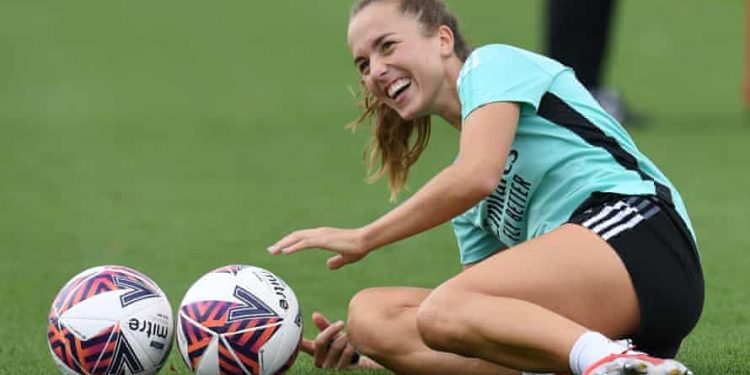 
Arsenal Women have a new home this week. On Wednesday, they host Wolfsburg at the Emirates Stadium in the quarter-finals of the Champions League and north London rivals Tottenham travel to N7 on Saturday.

“It’s where we want to bring women’s football,” says midfielder Lia Wälti. “Every time we’ve played in the big stadiums, we’ve got at least double or triple our normal crowd. I’m really positive that this is going to work. Bringing people into these big stadiums is way easier than getting them to places like Borehamwood and it’s just great to be part of it.”

These back-to-back games will take the teams fixtures at the Emirates this season to four after they hosted Chelsea on the opening day of the season and Barcelona in December.

The aim is to make the stadium feel as much like home to the players as Borehamwood so they do not lose any home advantage, no matter how small, when they step out under the lights of the 60,260-seater stadium. According to Wälti, the psychological impact of being in the club’s showpiece stadium is huge. “Even if the stadium is empty it feels like a completely different game,” she says. “You feel appreciated, you feel valued, you have the opportunity to play on the biggest stage in the best possible stadium.”

Clubs hosting games in the main stadiums is “definitely” a statement of how much clubs value their women’s teams and “all the clubs who don’t offer that to the girls are also making a statement: the opposite,” says the Swiss midfielder.

Wolfsburg are similarly stepping up, with the second leg being played at the club’s main ground. For Wälti, whose two-footed game was developed in a boarding school where they would have to do push-ups if they used the wrong foot in drills, it is important the Gunners are not complacent against the German league leaders.

“Never underestimate a German team. That’s all I’m saying,” says Wälti, who joined Arsenal from Turbine Potsdam. “I played in Germany long enough to say that Wolfsburg has always been a great team even though it doesn’t always look like that on paper. A German team is always hard to beat.

“They have a mentality that I miss sometimes here. They have a great mentality on the pitch and can have half of their players available and they still manage to put a great game down. It’s a very different team to maybe five to 10 years ago but it’s still a really great team. I don’t want a single player to underestimate them because that will be not good.”

The 28-year-old has had one of the most challenging seasons of her career. Under Joe Montemurro she thrived and was critical at the base of midfield. However, with the new manager, Jonas Eidevall, tweaking the way the team played, Wälti struggled to find her fit.

“You’ll get a very different answer from me than half a year ago,” she says. “At the start, I struggled a bit to find my position, to adapt to the way Jonas needed me to play for the team. There were certain games where it worked well. We analysed a couple of games back, because I wasn’t always happy after games, and we saw that I was more successful than I thought I was. It was just a different game for me, I was higher up the pitch and less involved in the buildups.”

She feels they have found the right balance of how she can “adapt to his game, but also how he can adapt to my strengths. It’s great to see that he wants to adapt as well. It needs to be both: the player and the coach. In the end you want to have the best success for the team. It has been a good learning year for me.”

At times, though, she struggled to enjoy football. “With women’s football growing, more people are watching, there is more attention on the whole game and you know when you didn’t play well or didn’t do what you wanted. Then you read it a thousand more times on social media. It doesn’t help and sometimes it is hard to enjoy it, but it’s also an even better feeling when you come back after a time like that and show yourself, the coach and everyone else that you’re still able to put the performance down.

“We all go through that phase in our careers and people from the outside sometimes forget that there are other things going on in life as well that can affect performances.”

The team has been through a tough phase this season. Defeat to Chelsea in the FA Cup final in December was followed by a second defeat to Barcelona in the Champions League group stage and the Gunners’ season looked to be unravelling as they suffered a further three defeats in four games.

“It’s difficult for players to be confident following games like those and sometimes you get in a negative spiral and things just don’t go well for yourself. But it’s just phases in football and you need to kind of accept that and move on. I’m glad we didn’t drop points in December in the league, that was important, that we’re still in a good position.”

Haven Studios Is Being Acquired By Sony’s PlayStation Studios

Haven Studios Is Being Acquired By Sony's PlayStation Studios