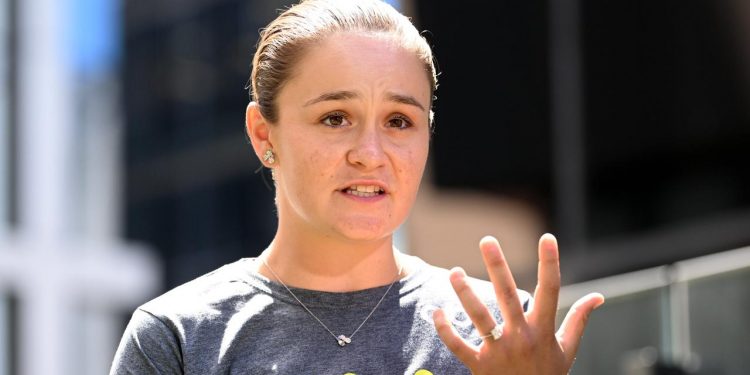 Ash Barty has announced her next career move is a pivot almost nobody saw coming.

The Aussie superstar has revealed she has turned her attention to producing a series of children’s books as her first project following her retirement announcement last month.

Despite her decision to step away from tennis for good, Barty has a huge 2022 ahead of her.

Last month, she revealed that she was hoping to get married to long-time partner Garry Kissick sometime this year.

She has also been linked with potential interest in returning to professional sport in golf, cricket or even in the AFLW.

The 25-year-old won her first title since retiring from tennis at a local golf tournament in Brisbane last week.

It’s why her new career as an author has surprised some, despite Barty previously declaring interest in a book series project.

The Courier-Mail first reported Barty’s series will be titled ‘Little Ash’ and will be based on the three-time grand slam champion’s real life experiences on and off the tennis court.

The six-book Little Ash series, written and illustrated with First Nations creatives Jasmin McGaughey and Jade Goodwin and will be available for purchase in July.

The book is already being promoted by publisher HarperCollins.

“It’s the day of the tennis tournament and Ash is so excited to compete,” a blurb on the publisher’s website reads.

“But Ash forgets her favourite hat, there’s a flat tyre and Ash wonders how they will ever get there! Will Ash arrive in time for her big match?”

Barty also plans to write a memoir of her career later this year.

The reigning Australian Open champion said she was inspired to get into book writing by her niece Lucy, five.

“The project has been so much fun and something I have always wanted to do,” she said.

“Lucy was my north star. She is the perfect age to understand stories and storylines and read chapter books.

“Being able to read it to her will be great and to go up to readings to kids in rural areas is something I want to be really hands-on with.”

Barty was the longstanding World No. 1 and claimed her third grand slam title at the Australian Open in January, but said she had achieved all her goals in tennis and the time was right to chase her other dreams.

Six years ago, the Queenslander took an indefinite break from the sport and signed with the Brisbane Heat for the inaugural season of the Women’s Big Bash League.

Barty later revealed the engagement was very low-key and she said in February her wedding will be just the same — and she wouldn’t have it any other way.

“Hopefully it will be this year,’’ she said.

“It will be very low-key, very small, pretty chill, for Garry and I just the people we love the most, people who have been impactful and important in our lives.

“My nieces and nephews will be front and centre, I wouldn’t live it down if they weren’t, they will be dress shopping before I will be.’’

The pair met in 2016 at the Brookwater Golf Club in Brisbane, where Kissick, who is an aspiring professional golfer, works as an irrigation technician.The sporting duo immediately clicked and went public with their relationship in 2017 when they attended the John Newcombe Awards together.

Sajid Javid held non-domicile status for six years when he was a banker, reports say