Ash Barty claims Australian Open with a fightback for the ages 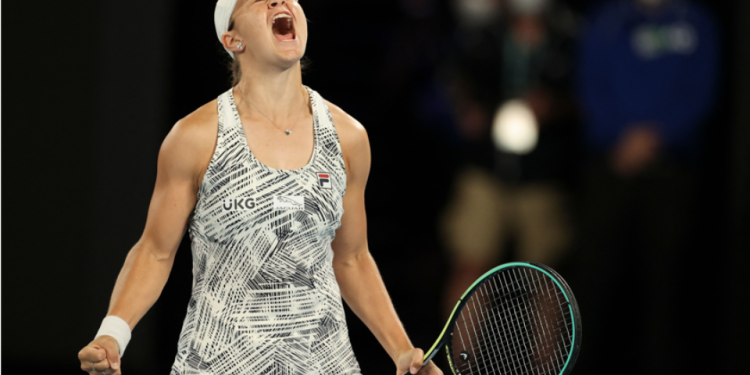 
In a display of never-say-day determination and sheer grit, Ash Barty has won the Australian Open Championship.

The 25-year-old defied intense pressure and expectation to become the first home hope to win the Australian Open singles crown in 44 years.

The world No.1 completed her dream fortnight at Melbourne Park, which up until Saturday night’s climactic contest had been something of a cakework for the 25-year-old champion.

Her steel-willed 6-3 7-6 (7-2) victory over American Danielle Collins came in the most-anticipated women’s Open final  for almost half a century.

Unlike her romp through to the championship decider, this victory was gut-wrenchingly hard-earned, with Barty needing to fight back from 5-1 down in the second set before prevailing after one hour and 27 tension-filled minutes.

Despite the late wobble, the straight-sets win ensured Barty’s march to the title was the most commanding campaign since Steffi Graf in the second-ever Open at Melbourne Park in 1989.

Fittingly, Chris O’Neil, who had held the honour as the last Australian to win the Open women’s singles in 1978, delivered the Daphne Akhurst Memorial Cup to Rod Laver Arena for the presentation.

In addition to busting the infamous home hoodoo in Melbourne, Barty also joins the great Serena Williams as only the second active player in women’s tennis to have captured grand slam titles on clay, grass and hard courts.

The 25-year-old all-court queen will head to New York in August hoping to follow in Williams’ footsteps there too by completing the coveted career slam with title glory at the US Open, the only major still eluding Barty.

The first Australian finalist since Wendy Turnbull in 1980, Barty was also the first player to face a break point on Saturday night.

But she saved it in the fifth game with a daring half-volley forehand winner.

After escaping danger, Barty held serve with her fourth ace to lead 3-2.

The top seed brought up break point of her own with a booming off-forehand winner in the next game before Collins coughed up a double to hand Barty the advantage.

The Australian didn’t need a second invitation, closing out the opening set with another ace wide out.

Incredibly, it was only the second time Barty had been broken in 88 service games stretching back to her first match of the summer in Adelaide almost a month ago.

The hot title favourite found herself in a huge hole when she surrendered serve for a second successive time to fall behind 5-1.

Barty, though, weathered the storm and reeled off four consecutive games to force a tiebreaker.

The now-three-time grand slam champion sealed the famous victory with her 14th forehand winner, sparking scenes of delirium both inside Rod Laver Arena and outside in Melbourne Park’s Garden Square.

Poignantly, Barty’s mentor and Indigenous idol Evonne Goolagong Cawley made a surprise appearance to present the trophy to Barty after Tennis Australia had said the former world No.1 wouldn’t be able to attend the final.