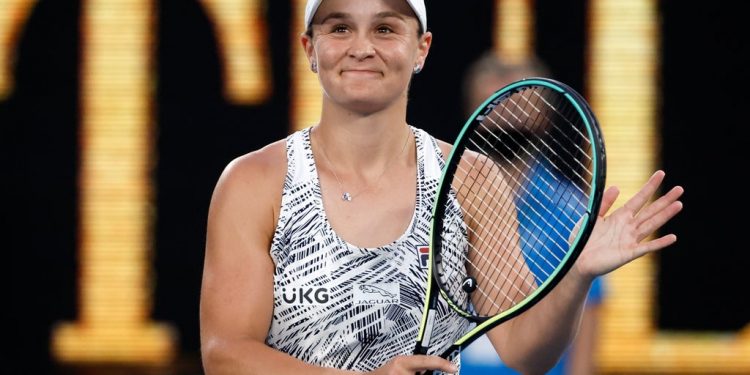 Follow live updates from the Australian Open women’s semi-finals as world number one Ashleigh Barty faces Madison Keys for a place in Saturday’s final. Barty, the Wimbledon champion and tournament favourite, is aiming to become the first Australian since 1978 to win her home Grand Slam and the 25-year-old has yet to drop a set in reaching the final four.

In doing so, she has taken out Americans in Amanda Anisimova and Jessica Pegula and faces another today in the unseeded Keys, who is aiming to reach a Grand Slam final for the first time since the US Open in 2017. “Madi is an exceptional athlete, she has a great serve, great first strike off the return and off her first ball after her serve,” Barty said. “It’s about trying to put her in an uncomfortable position, try and get her off-balance, because if she controls the centre of the court, the match is on her racket.”

In the second semi-final to take place on Rod Laver Arena, Iga Swiatek faces another American in Danielle Collins. Swiatek, the seventh seed from Poland and the 2020 French Open champion, defeated Kaia Kanepi in the previous round while Collins beat Alize Cornet. Follow live updates below:

Of all the campaign speeches Daniil Medvedev could have given after advancing to the Australian Open semi-finals, “Be like Novak” was perhaps an ill-advised selection. The reference to men’s world number one Djokovic, and the ensuing boos, was a jarring reminder of all the controversy and drama that dominated the build-up to the opening Grand Slam of the year, and which had largely been left behind once the on-court action began.

Djokovic’s absence threatened to cast a shadow over the men’s tournament but the void has been filled by two weeks of gruelling, competitive and largely unpredictable matches, resulting in a final four and two semi-finals of the highest, available, order. All four semi-finalists, Medvedev, Rafael Nadal, Stefanos Tsitsipas and Matteo Berrettini, have survived five-set epics in the second week. There are sure to be more to come.

Medvedev’s duel with Felix Auger-Aliassime on Wednesday was the latest case in point: a thrilling battle over four hours and 42 minutes which saw momentum swings and a magnificent comeback from two sets and match point down. The world number two, and tournament favourite, was staring down the barrel of elimination when he summoned inspiration from Djokovic, as well as, it should be said, Roger Federer and Nadal.

Order of play on the main showcourt on the 12th day of the Australian Open on Friday (play begins at 0100 GMT; prefix number denotes seeding):

Daniil Medvedev can become the first man in the Open era to win a second major immediately after claiming his first following his 2021 U.S. Open success.

“If it’s true, then it will be history. It’s perfect,” the Russian said.

Stefanos Tsitsipas, who will face Medvedev in Friday’s other last-four clash, would become the first Greek to win a Grand Slam should he lift the trophy.

Nadal not motivated by passing Djokovic and Federer

An Australian Open that began with an unprecedented saga involving reigning champion Novak Djokovic will finish with a historic flourish on Sunday with all four men’s semi-finalists having the chance to write their names into the record books.

Should 2009 champion Rafa Nadal win the Australian Open for a second time the Spaniard will become the first man to claim 21 Grand Slam titles, nosing ahead of great rivals Djokovic and Roger Federer.

The 35-year-old has said he is more motivated by the love of playing than finishing ahead of Djokovic and Federer.

Matteo Berrettini, who will play Nadal in the first semi-final on Friday, is seeking to become the first Italian to win the Australian Open.

“I like to think that I’m writing a little bit (of) Italian tennis history. We are a great country for tennis,” he said.

Kyrgios and Kokkinakis into the Australian Open men’s doubles final

Nick Kyrgios and Thanasi Kokkinakis have eased into the Australian Open men’s final with a 7-6(4) 6-4 victory over Marcel Granollers and Horacio Zeballos.

The unseeded Australian pair have never been in a doubles final in their careers and they will contest the title against compatriots Matthew Ebden and Max Purcell.

“I’ve played a lot of singles matches around the globe with amazing atmospheres but this week with Thanasi. Nothing beats this, this has been insane,” Kyrgios said.

Kokkinakis said: “It’s all about the crowd, the atmosphere. That is what gets us going. We worry about the tennis second. We would not have had this result anywhere else it’s sick.

“Both of us bring something different. A different energy, a different charisma on the court. We just enjoy it and have fun. I think we’re unpredictable and that’s why the crowd enjoy it.”