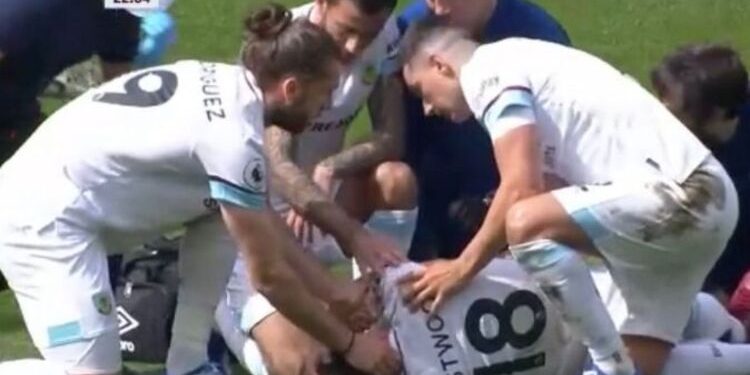 
Nikola Vlasic was reduced to tears after Ashley Westwood suffered a horror injury in the first half of Burnley’s Premier League trip to West Ham. The Clarets midfielder suffered a suspected broken leg following a challenge with the Croatian international, who was left distraught by the devastating outcome.

Play was stopped for several minutes and both teams temporarily left the field of play while Westwood received treatment, before later being stretchered off.

Vlasic appeared to immediately realise the severity of the incident as he encouraged medical staff to rush to the scene.

Westwood’s leg appeared to get caught underneath the winger during the challenge in Burnley’s first game since the midweek sacking of Sean Dyche.

Declan Rice was among those to console his team-mate, as he struggled to hold back the tears.

There was applause from everyone inside the London Stadium as Westwood left the field before being transported to hospital.

West Ham sent their well wishes to the Burnley man following the stoppage, tweeting from their official account: “Ashley Westwood is getting medical attention for a serious-looking injury here. Our best wishes for him in his recovery.”

Several of Burnley’s players were also shaken after watching their team-mate suffer such a serious injury.

Dwight McNeil was close to the incident and immediately put his hands behind his head.

He was later spotted kneeling and taking a moment to himself after seeing the horrible injury up close.

There was some slightly more positive news, however, when Westwood touched hands with one of the Burnley staff as he left the field on the stretcher.