Ashling Murphy: Man, 31, appears in court charged with murder of teacher in Ireland 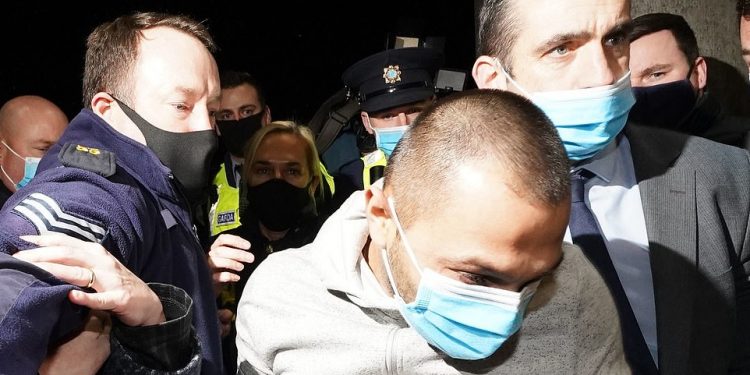 
A 31-year-old Slovakian man charged with the murder of Irish primary school teacher Ashling Murphy was heckled tonight as he was pushed through an angry crowd by police officers before his court appearance.

Another man also in his 30s who was arrested earlier today in relation to the murder of the 23-year-old has been released without charge.

Jozef Puska, who was arrested on Tuesday, appeared before a special sitting of Tullamore District Court at 8.15pm tonight. Following his court appearance, he was remanded into custody at Cloverhill Prison.

Puska was pushed through an angry crowd as he was brought from a Garda car to the special sitting of Tullamore District Court in County Offaly on Wednesday evening.

He was pictured wearing a mask and a grey tracksuit as he arrived, surrounded by police officers, press photographers and angry onlookers.

The man, reportedly Slovakian and living in Tullamore, was arrested yesterday after he was discharged from a Dublin hospital, and was under questioning in the town where Ashling was killed as the main suspect in her death.

Relatives of Ms Murphy were in attendance at tonight’s court hearing before Judge Catherine Staines, according to the Irish Independent, with some holding pictures of the school teacher.

The suspect did not address the court during the brief hearing, but the Irish Independent reported that the court heard Puska replied ‘no’ when the charge of murder was put to him.

Only the High Court of Ireland has the power to grant bail for a murder charge, with Judge Staines remanding Puska until January 26 to Cloverhill district court.

Earlier today, police arrested another man over Ms Murphy’s murder. He was being held at a police station in the Eastern Region of Ireland on suspicion of withholding information from police, but has been released.

A file is to be prepared for the Office of the Director of Public Prosecutions on the matter.

Ashling was strangled to death as she jogged along a canal path in Tullamore on the evening of January 12, with her body found on the path the same day. 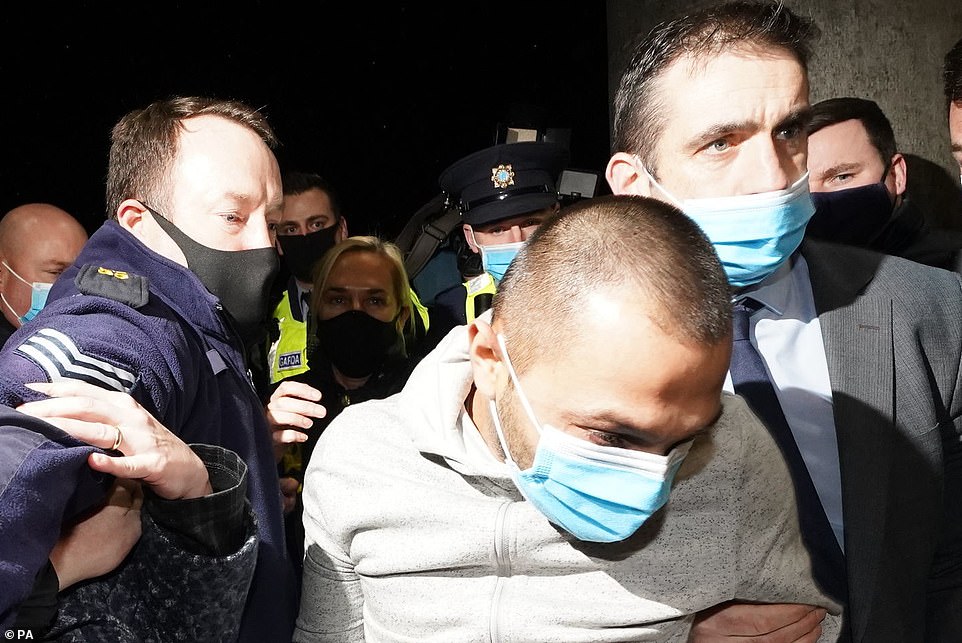 Jozef Puska, 31, is led in to Tullamore District Court where he is charged with the murder of Irish teacher Ashling Murphy who was found dead after going for a run along the Grand Canal in Tullamore, Co Offaly last Wednesday (January 12) 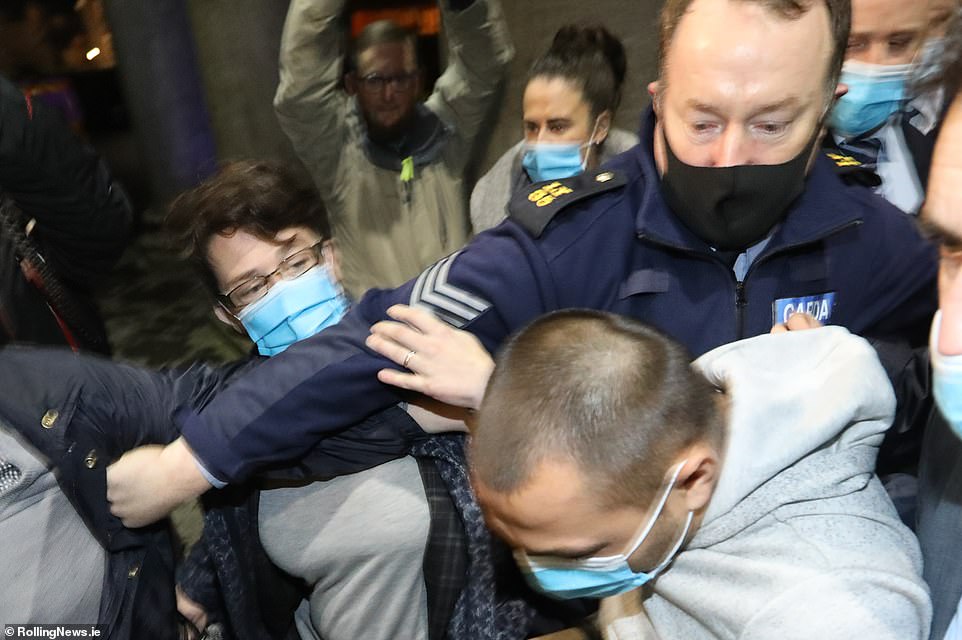 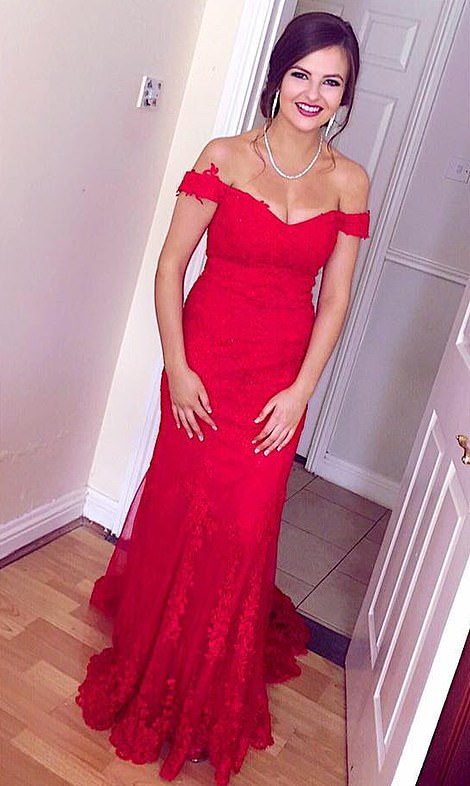 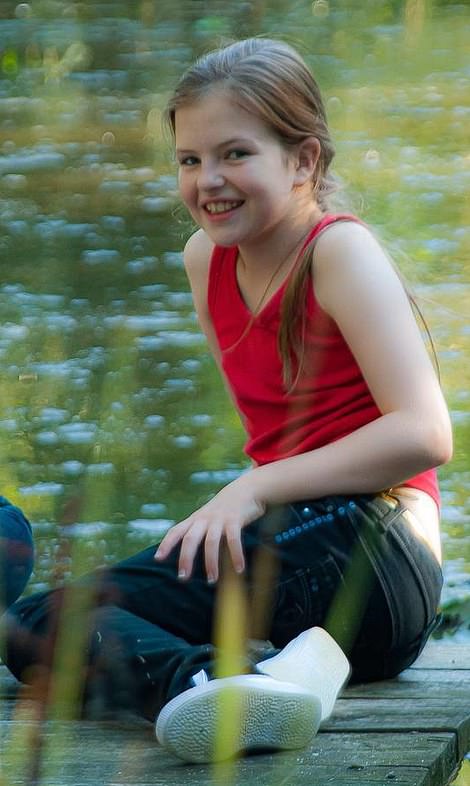 Ashling Murphy, 23 (left and right, as a child), was killed on the afternoon of January 12 as she went for a jog in the town of Tullamore. Two men have now been arrested over the killing 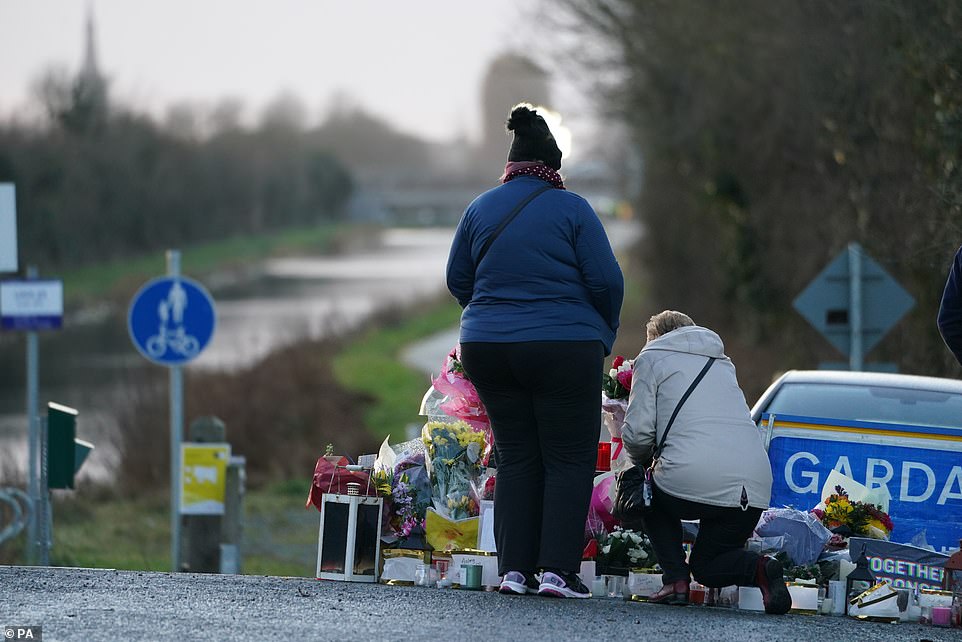 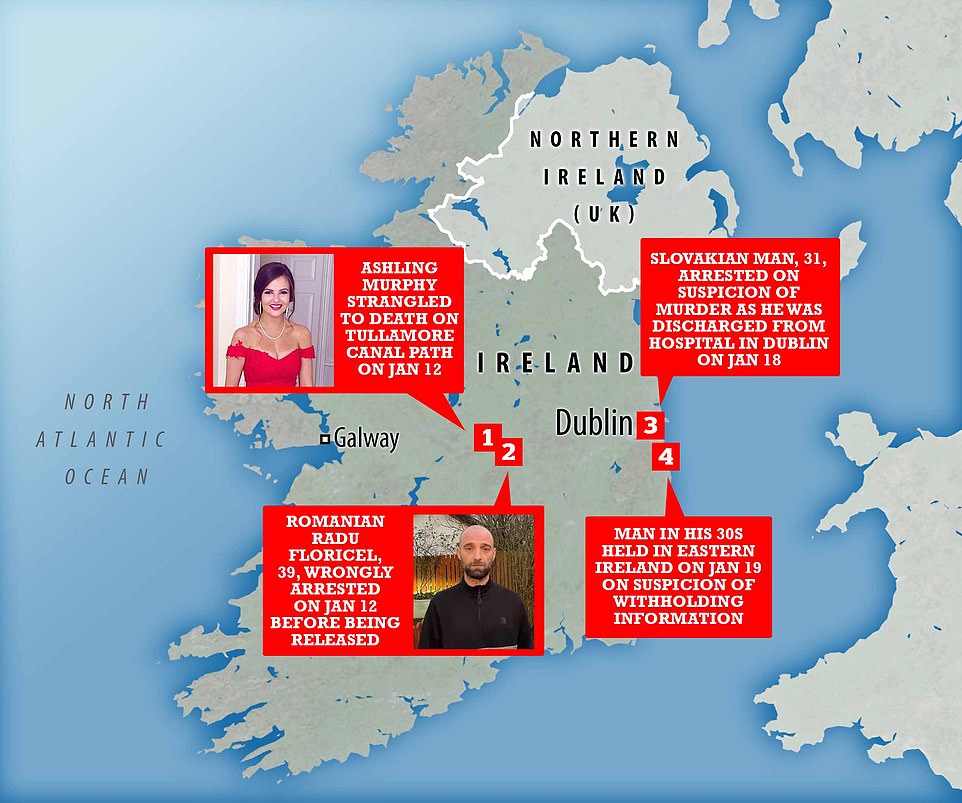 Police are now holding two men on suspicion of involvement in the crime, having wrongly arrested a third who has been released

Police say the 23-year-old, a primary school teacher and talented musician, tried to fight off her attacker using a set of keys before being killed.

Officers arrested 39-year-old Romanian Radu Floricel the same day – though later released him and said he is no longer suspected of involvement.

Detectives then put out an appeal for information including to hospitals, with doctors told to look out for anyone arriving with ‘suspicious’ injuries.

That led them to a ward in Dublin, where a man had checked in Thursday with stab wounds he claimed were inflicted in a fight in the west of the city.

Officers, who believe some of the wounds were self inflicted, questioned the man – and on Tuesday arrested him as their main suspect. 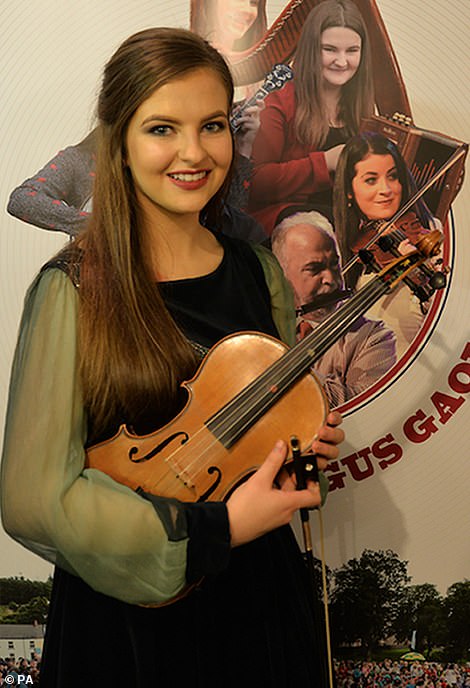 Ms Murphy came from a highly respected family in the local area that is well known in the music scene, and live outside Tullamore

The arrest came the same day as Ashling’s funeral, with her heartbroken boyfriend, Ryan Casey, telling mourners at her graveside that Ashling ‘is the greatest love of my life’.

He said: ‘I will cherish the last five years we spent together for my entire life. I hope that some day, God willing, we can be reunited once more and continue the great plans we had made for each other.

‘Goodbye for now, but not for ever, darling. Ashling shall live on in all of our hearts.’

Police said they had not intended to make the arrest on the day of the funeral, but that their hand was forced because the man was about to be discharged from hospital and they were afraid of losing him.

Prior to his arrest, the man had spent five nights in Dublin being treated for injuries to his hands and face – some of which police suspect were self-inflicted.

A relative brought the man to hospital last week for treatment to stab wounds that he claimed to have sustained in a fight in west Dublin. Police were then alerted after warning hospitals to be on the look-out for anyone arriving with ‘suspicious’ wounds.

He was admitted and was treated by doctors, before being taken into police custody as he was discharged and driven to Tullamore police station, where he remains.

As detectives question the man, officers continue to gather evidence to build their case and are thought to be taking DNA samples from the suspect to see if it matches DNA found at the scene of the attack.

It comes after police revealed Ashling may have used a set of keys to try and fight off her attacker, before being killed.

Officers are also thought to have seized cars and phones linked to the suspect, as well as carrying out searches of his home.

Detectives are still looking for a knife used in Ashling’s murder, and have searched the canal where she died and seized a nearby bottle bank where they suspect it may have been hidden. 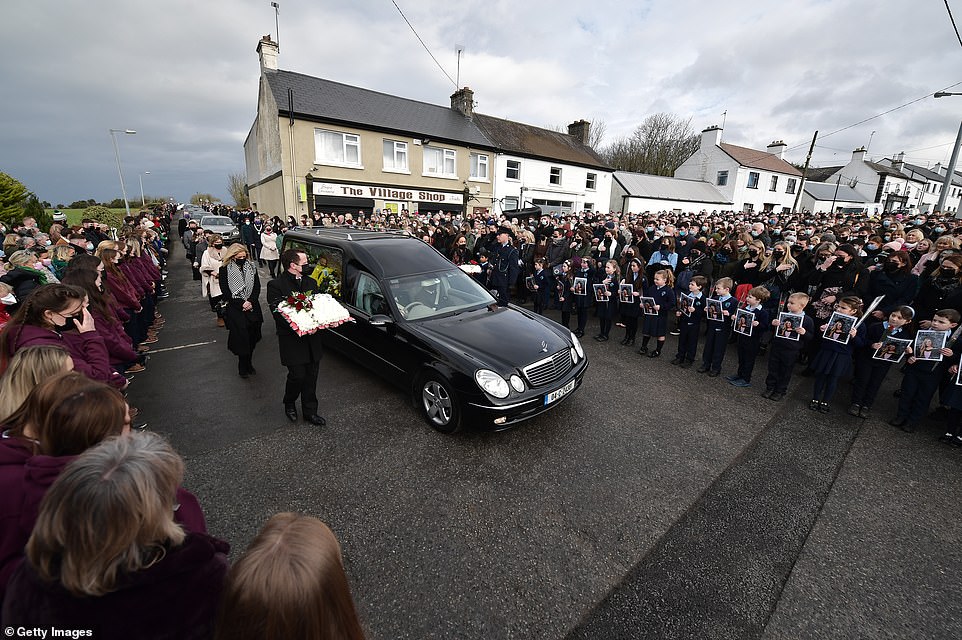 Mourners walked beside the hearse carrying the coffin of Ashling Murphy as the cortege arrived for her funeral at St. Brigid’s Church 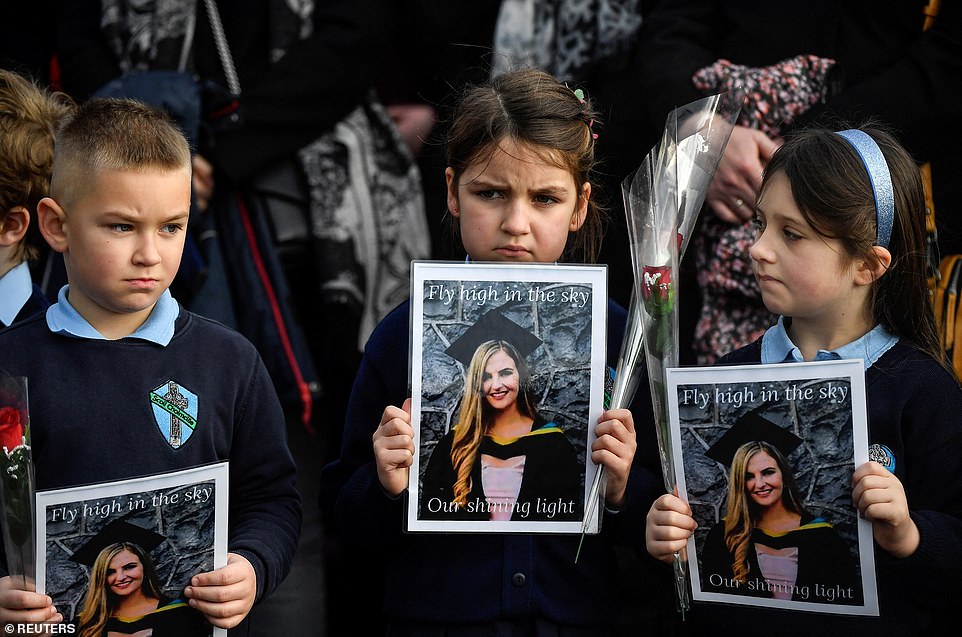 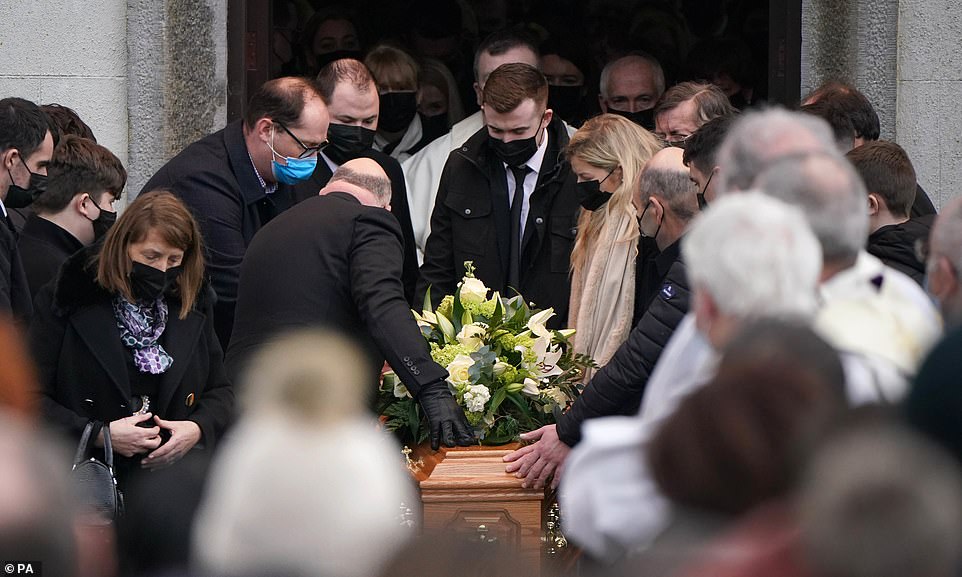 Family members place their hands on the coffin as it is carried out of St Brigid’s Church, Mountbolus, Co Offaly 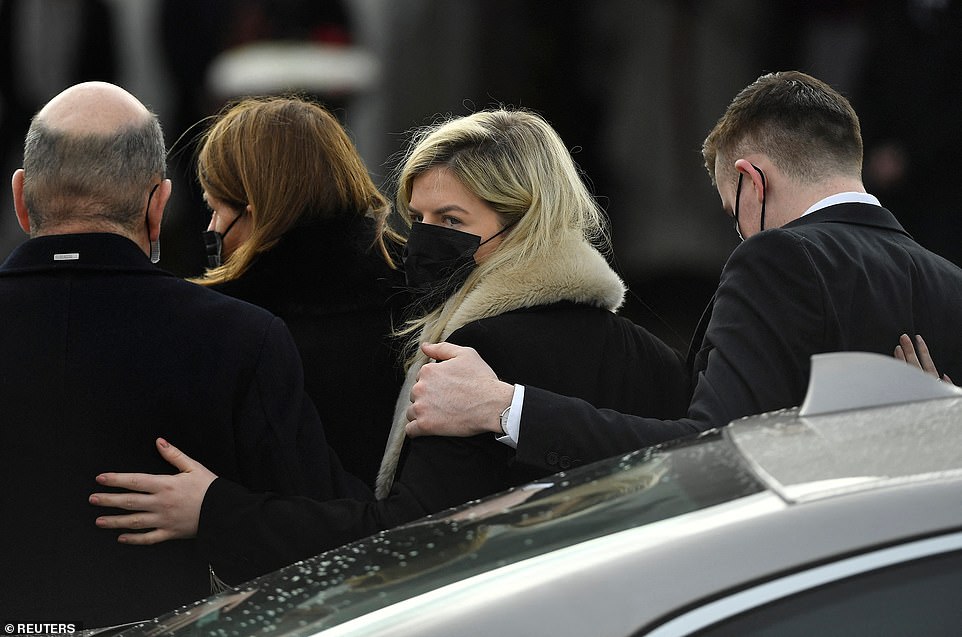 Mother and sister of the late 23-year-old teacher, Ashling Murphy, who was murdered while out jogging, arrive for her funeral at the St Brigid’s Church in Mountbolus near Tullamore, Ireland January 18, 2022

Gardaí have also seized a taxi they believe was used to transport the suspect to Dublin from County Offaly in the hours after the murder last Wednesday.

The taxi travelled from Dublin to Tullamore to pick up the suspect, gardaí believe.

A specialist team is now forensically examining the taxi believed to have transported the suspect to Dublin.

It is one of two cars that gardaí believe the suspect may have travelled in before he appeared at a Dublin hospital. The other car, which was also seized in Dublin, is also being forensically examined.

The Irish Daily Mail previously reported that gardaí spent two days reviewing CCTV footage at Tullamore train station and determined that the suspect did not travel to Dublin by train, unless he had hidden his appearance behind a Covid mask, baseball cap and other improvised disguises.

That led them to believe that someone drove him to Dublin and dropped him at the home of a relative.

Gardaí have also made enquiries at every taxi company in Tullamore and surrounding area to determine if any driver brought the suspect to the Co. Offaly town.

They also want to determine if he is the man in the black tracksuit with a distinctive white stripe down the leg that was seen on Main Street, Tullamore in the hours before the murder.

That man, who was captured on CCTV footage, appears to be cycling a Falcon Storm mountain bike, very similar in colouring to the one that was found abandoned close to the murder scene.

Bishop of Meath, Tom Deenihan, told mourners that ‘a depraved act of violence’ which deprived Ms Murphy of her life has united the country in grief and support. 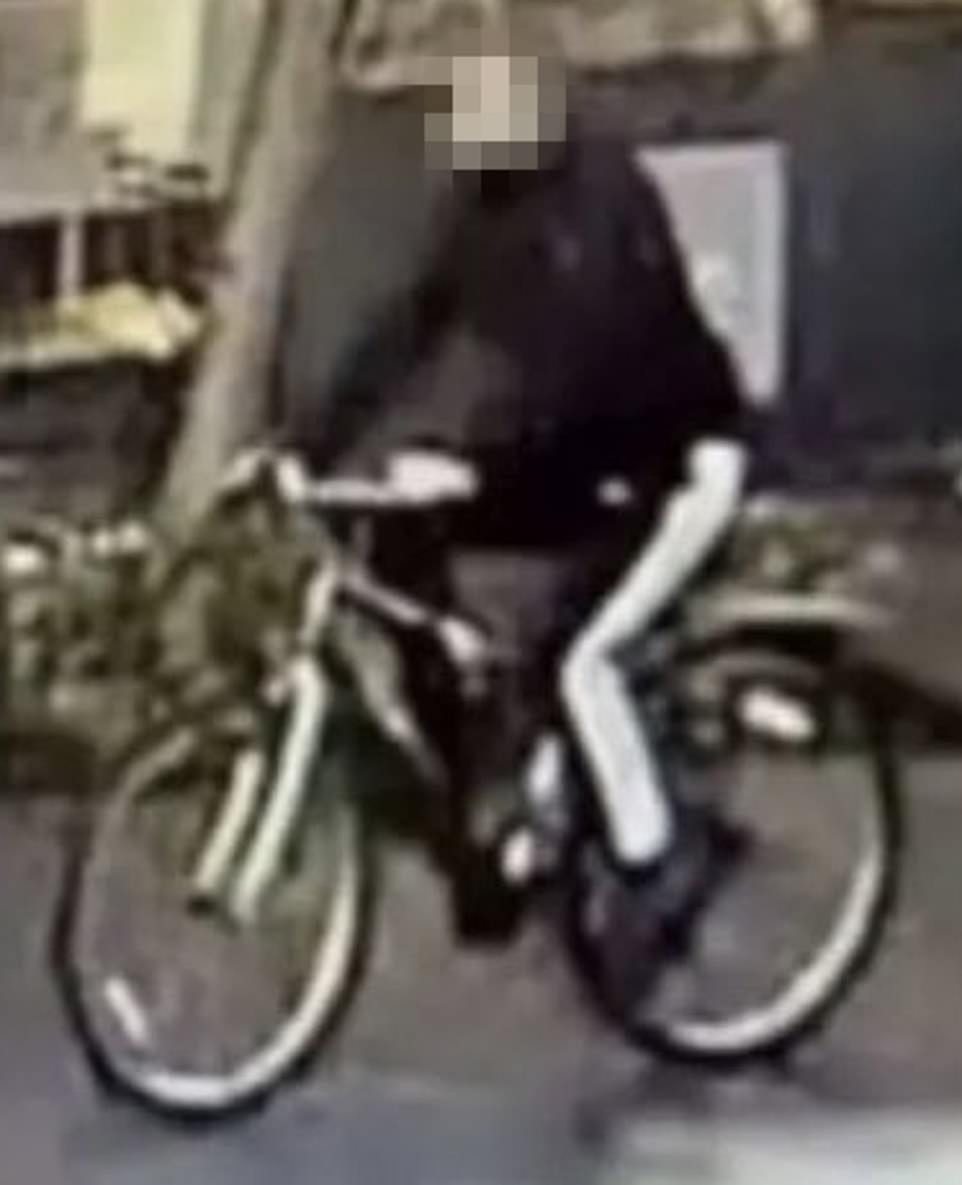 Police probing the murder of schoolteacher Ashling Murphy are trying to identify a mystery man who was seen cycling near to where the 23-year-old was killed. According to gardaí, at the time of the attack the suspected killer wore a dark tracksuit with no hood and black tracksuit bottoms with a large, distinctive white stripe (pictured: CCTV still)

Bishop Deenihan said that her death has asked questions of ‘ourselves and of society’, and has questioned attitudes towards women, and ‘our values and morality’.

‘Whether those questions will be addressed or passed over remains to be seen but we cannot allow such violence and disregard for both human life and bodily integrity take root in our time and culture,’ he added.

‘The past few days have been a nightmare. A walk on a mild and sunny afternoon in January should be a happy event, promising the brighter and warmer days of spring and summer.

‘We all know that no individual should die like Ashling and no family should suffer like Ashling’s.

‘Respect is an old-fashioned word but it is an important one. Respect was missing last Wednesday but it has re-emerged here all the stronger. Let us respect each other.’

He added that one piece of light during last week’s darkness was the outpouring of support and sympathy.

Parish priest Fr Michael Meade told mourners that Ms Murphy’s family has been ‘robbed of your most precious gift’.

‘A gift that gave only joy and love, fun and laughter to many, many beyond yourselves and bounds of your own home,’ Fr Meade added.

Children outside the church held photographs of Ms Murphy and roses. The message next to Ms Murphy’s image read: ‘Fly high in the sky, our shining light.’

Representatives from Ms Murphy’s local Gaelic football club as well as from her old school attended the parish church of St Brigid.

Schoolchildren provided a guard of honour outside the church prior to the funeral. Several children also held fiddles and tin whistles. 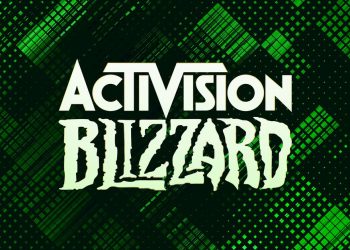 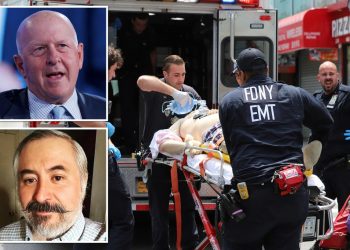 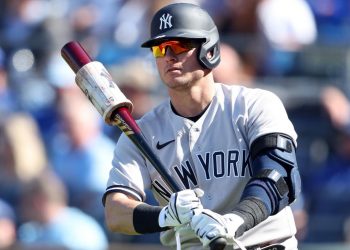 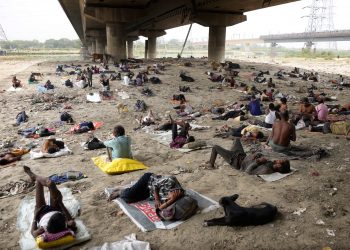 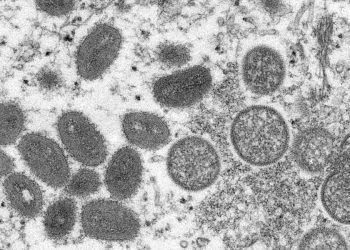