Home » ASK TONY: BT called in the debt collectors when I found a cheaper deal

ASK TONY: BT called in the debt collectors when I found a cheaper deal

Recently, I moved from BT to Expert Telecom and was assured by Expert that it would deal with all legal and transfer matters. I have since received a letter from Moorcroft debt agency saying I owe BT £1,148.46 because I was in breach of contract.

Apparently, information about a contract which I didn’t even realise I was on came by email. I didn’t open this email as I was waiting for a cataract operation and couldn’t see properly.

As an 86-year-old woman who has never owed any money, I was devastated to receive this enormous bill. 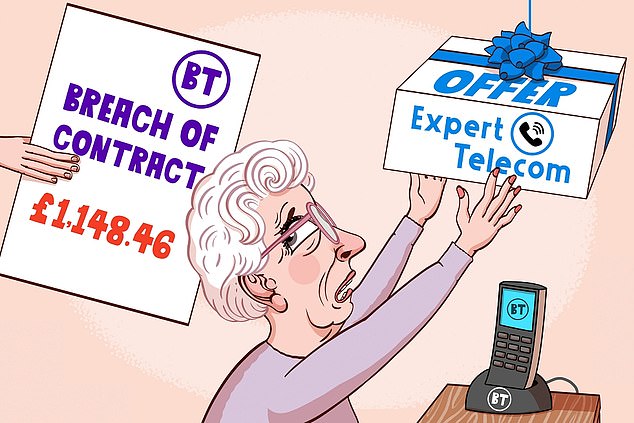 Bad call: BT sent an elderly customer a shock bill for £1,148 after she switched telecom services

I contacted BT and agreed the best option was for me to return to its service, but it refused to cancel the debt on the previous contract.

Tony Hazell replies: You were two months into a two-year contract with BT when the move to Expert Telecom was instigated, so what precisely was going on here?

You told me you were unaware of any new contract with BT. You had not been able to read an email BT sent, so when you were contacted by Expert Telecom and offered a cheaper deal, you took it up.

When your move was initiated, BT says it wrote to you warning of the fees, but you had the impression your new provider would cover these.

You then received the bill and panic stations ensued.

I contacted Expert Telecom to get its side of the story.

It says you agreed to move on March 19 and services were transferred on April 7. During this time, you had phoned Expert Telecom to talk about BT’s early termination charge. Expert says it offered to support you in any dispute, or to cover the charge in the form of a credit.

In all, you had 17 conversations regarding the transfer, including one where you said you were returning to BT, and another, five days later, when you changed your mind and decided to stay with Expert.

In the meantime, I had contacted BT, which agreed to cancel the £1,148.46 from the remaining 22 months of your old contract.

The key point here is what happened to trigger the new contract with BT, which resulted in the delivery of a new router, which also took you by surprise. A spokesman says: ‘We’re sorry for the concern Mrs C’s final bill has caused. As a gesture of goodwill, we have agreed to waive the outstanding balance.

‘We always clearly state the early termination fee if a customer wants to leave their contract early, and encourage those who are struggling financially to contact us so we can see how we can help with bills.’

Expert Telecom says it feels it has helped you every step of the way — and you do seem to have received considerable support according to the contact trail I have seen.

These things can be complex and companies must tread with care when dealing with older and more vulnerable customers.

And there is also a case for older customers to bring in assistance from younger trusted friends and relatives.

You have YOUR say 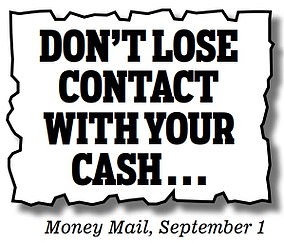 Every week, Money Mail receives hundreds of your letters and emails about our stories. Here are some from our article on how you’ll soon be able to spend £100 on a c­ontactless card.

Contactless has pros and cons. It is good if you have a smartphone or smartwatch, as nobody can copy your fingerprint.

However, it is bad if you lack self-discipline with money — I fall into this category.

Shoppers should insist on using cash for all smaller transactions, or it will be taken away from us.

Everyone needs to participate in the push back for cash. If a shop won’t accept it, go elsewhere.

I use cash when I can, but the idea that the increased contactless limit will make people spend more is patronising. I know what I can and can’t afford, and so should everyone else.

I have always refused these cards — and I always will. My bank is continually asking me to go contactless.

Cards are accepted almost everywhere nowadays, including shops that don’t take cash. Cards offer rewards and cashback, while coins and notes offer nothing. If you only use cash, you’re losing out.

I went to the pub with friends and used my card for every round. When I checked my pockets for cash the next morning, I thought it had been a cheap day out. My bank manager knows more about my drinking habits than my doctor.

Customers should have the right to choose their contactless spend limit— £100 is too much.

What happened to my father’s 1970s life insurance policies?

My father passed away in February last year, and since then we have been trying to sort out his affairs.

We came across several Trident life insurance policies. I was able to find that these had been taken over by Sun Life. However, this is as far as I can get. No one seems to know what happened to them after that.

Tony Hazell replies: I took details of these policies to Sun Life of Canada and, as I suspected, they had been cashed in long ago — nearly 40 years ago, in fact.

These revealed that your father had taken what is known as a ‘cluster policy’, made up of seven parts. The first had an invested sum of £250 and the remainder of the clusters had a single investment of £200 each.

This may have been done for tax purposes, so each part of the cluster could be surrendered separately, or it may have been to allow flexibility in payments when setting up.

It was taken out on November 13, 1975, and Sun Life received signed instructions on August 6, 1985, to cancel all the clusters.

The firm’s efforts in digging this out are in marked contrast to some insurers, who claim they cannot find policy details before certain dates because they have been destroyed.

I bought a settee from SCS three years ago and was pressured into taking out a five-year warranty for £170. The seats have wrinkled up and I have repeatedly contacted SCS, who told me it would cost £75 for someone to come out to look at it.

SCS has now agreed to go out at no cost to inspect the product.

Our home was flooded with sewage water after a drain on our property became blocked.

We’ve been having issues with this drain blocking up for 18 months, but all the utilities company seems to do is come out and unblock it.

Fortunately, Thames Water arrived to clean up a few hours after you wrote to me. It now has a work permit to investigate the problem later this month.

I signed up to language app Duolingo’s Plus membership at £6 a month. It took £80.39 immediately and I can’t find a way to contact it for a refund.

DuoLingo says you actually signed up to the annual plan free trial, and were charged when it ended.

The sum is initially billed in U.S. dollars and is therefore not divisible by 12. However, Duolingo has now refunded you because of the confusion.

I arranged for a small caravan window to be collected from a dealership in West Yorkshire by courier firm Hermes.

For three days in a row, Hermes told me it was unable to collect the parcel — and later admitted it had lost it.

I had paid Hermes for insurance to ensure the safe delivery of the parcel, but have had no offer of compensation.

Hermes says the issue is with the seller rather than its collection service. A customer service agent incorrectly told you that Hermes had lost the parcel.

It has offered a goodwill payment — which you have rejected — and advised you to communicate directly with the seller.

I have had Co-op home contents insurance for many years. I received a letter in March saying payment was due, so sent a cheque for £41.20.

Two weeks later, I received a letter saying it had cancelled my cover. My June bank statement showed that the cheque was cashed on June 1. I wrote to Co-op, but my letter was returned unopened.

Tony Hazell replies: Co-op Insurance says it received your cheque in May 2021 but, unfortunately, owing to an administration error, the payment was not applied to your policy.

To apologise, it has adjusted the renewal date of the policy and has sent you a cheque for £50.

I was so surprised at the size of your premium that I checked this was an annual and not a monthly one — but this is what you pay per year.

Inside the Top Gun: Maverick Cockpit

JEFF PRESTRIDGE: There is a £2.7bn reason Rishi Sunak will not reform inheritance tax in Budget... but council tax...

I’ve been exposing the tactics of the claims management firm, Flight Delay Claims Team (FDCT) since 2017, after it...

PFSweb Management Ponders What To Do With $185 Million

PFSweb Management Ponders What To Do With $185 Million

Britain’s best and worst mortgage lenders, according to their customers

The best and worst mortgage lenders in Britain have been revealed in a poll voted on by their customers.Consumer...

Nearly 4 million low-income households are behind on rent, bills or debt payments, up threefold since the pandemic hit,...

Inside the Top Gun: Maverick Cockpit