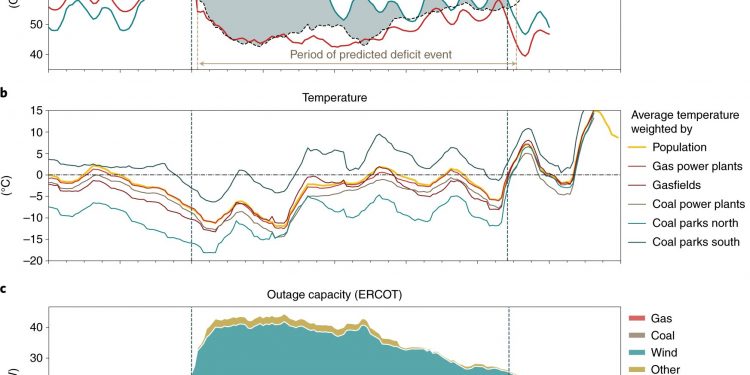 
A team of researchers at the University of Natural Resources and Life Sciences in Austria has conducted an assessment of the incentives in place in Texas to winterize the energy market to determine if they are sufficient to prevent future outages. In their paper published in the journal Nature Energy, the group studied 70 years of climate data for the state and conducted mathematical assessments of the results.

Last year, the state of Texas experienced an unusual weather event: Three winter storms struck one after another, bringing with them unusually cold weather for an extended period of time. That led to an energy infrastructure failure that left approximately 4.5 million people without heat. Since then, assessments have been made to determine why the system failed and to consider options for preventing a repeat in the future. In this new effort, the researchers looked at the energy infrastructure in Texas on a cost-analysis basis to determine if the current system might be tweaked to prevent future energy disasters.

As the researchers note, there were two main factors that led to the outages. The first was the means by which Texas has chosen to provide protection from outages—incentivization. To encourage utilities to winterize, the state permits hiking rates during times of high demand, capped at $9,000 per megawatt hour. The second is the insistence of Texas lawmakers not to connect their power grid to those of neighboring states—a situation that prevents backup power from coming into the state during times of stress. The researchers sought to determine if such a system was capable of changing to prevent such outages in the future.

The work involved analyzing climate data for Texas covering the past 70 years to determine how often winter weather severely stresses the power grid. The researchers found eight occurrences that likely would have led to infrastructure failure had they occurred in recent decades. They then generated estimations on economic returns for winterization efforts; they sought to determine whether spending a certain amount of money on winterizing would generate profits during bad weather to offset its expenditures. Mathematical analysis showed that the answer was probably not, because cold snaps happen so seldom in Texas. The problem, they noted, was exacerbated by the need to get more gas to coal-fired power plants in bad weather—a factor that played a major role in the outage last year.

The researchers suggest that the biggest problem for Texas is a major misalignment between societal values and financial investments by power companies. While the power companies stand to see losses or small gains from winterization, the people who depend on that power stand to lose much more.

Citation:
Assessing incentives for winterization of the energy market in Texas to prevent future outages (2022, April 5)
retrieved 5 April 2022
from https://techxplore.com/news/2022-04-incentives-winterization-energy-texas-future.html

The Benefits of Yogurt