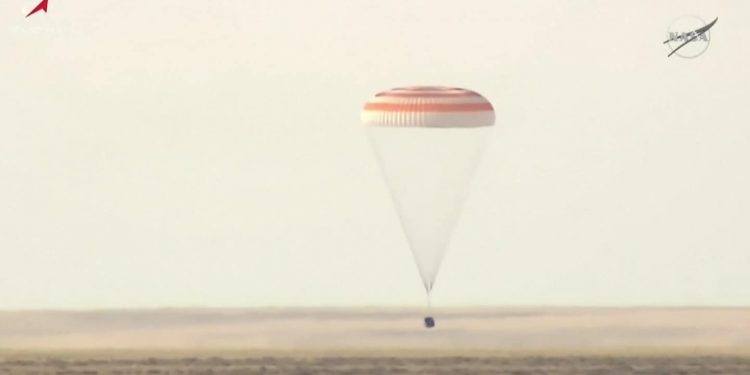 Rob Navias, of NASA’s public affairs office, said on NASA’s broadcast that it was “a perfect landing, a bull’s eye touchdown.” Shortly before touchdown, he said, “the crew feeling fine, everything going by the book.”

Navias said that after the spacecraft Soyuz landed it “was pulled over by the wind” and was on its side. He said that “is not unusual,” adding: “The search and recovery personnel are beginning the process of safing the vehicle,” or getting it into a stable orientation.

Vande Hei was pulled out of the capsule while it was still on its side, about a half-hour after landing. He seemed in good spirits, smiling and giving the ground crews a thumbs up.

The landing marks the end of a triumphant mission for NASA astronaut Mark Vande Hei, whose 355 days in space set a record for the longest single spaceflight for an American. His safe return, along with his Russian counterparts Pyotr Dubrov and Anton Shkaplerov, also serves as a powerful symbol of partnership amid heightened tensions between the United States and Russia over the war in Ukraine — strain that has surfaced persistent questions about whether the relationship in space can endure.

Ever since Russia’s bloody invasion of Ukraine began more than a month ago, NASA has steadfastly maintained that the station has been operating normally and that its relationship of more than 20 years with the Russian space agency has been unaffected by the turmoil on the ground.

NASA deployed a team of about 20 personnel to Kazakhstan to retrieve Vande Hei, who would be whisked away in a helicopter to a NASA aircraft at a nearby airstrip. He is scheduled to fly directly back to Houston to be reunited with friends and family. The Russian and American teams appeared to be working well together in the recovery effort, which they have done many times before over their long partnership in space.

NASA has said it cannot operate the station without the Russians, which provide the propulsion that allows the ISS to keep its orbit and maneuver when needed. Russia needs NASA, as well, as the space agency provides power to the Russian segment of the station.

Dmitry Rogozin, the head of the Russian space agency, has continued a campaign of threats and bluster, saying Russia could walk away from the partnership and, without its ability to boost the station, even leave it to crash into the ground. Meanwhile, NASA’s top officials have gone to great lengths to appear measured and professional — focused, above all, on keeping the crews alive in space.

NASA has repeatedly said the two space agencies are working well on an operational level and that the mission continues to transcend geopolitics. Despite the at-times harsh rhetoric coming from Russia, NASA Administrator Bill Nelson has said he is focused on the actions of the Russians directly involved in the management of the station. When Russia flew a crew of three cosmonauts to the station earlier this month, that was a sign, he said, “that the Russians are still committed to the International Space Station.”

That comity was on display Tuesday, when cosmonaut Shkaplerov handed over command of the station to NASA astronaut Thomas Marshburn, saying that while “people have problems on Earth … on orbit we are one crew.” Speaking in English, he called the space station “a symbol of friendship and cooperation and like a symbol of the future of exploration in space.”

He thanked “my space brothers and sisters” and praised Marshburn, saying he would be a “professional commander of ISS.”

Shkaplerov even joked about the satellite that Russia blew up last year with a missile, scattering debris in Earth orbit that threatened to hit the space station. “Unfortunately, we had a couple of emergency situations but not real dangerous. It’s like some satellites try to kill us, but we work together very hard.”

The astronauts and cosmonauts hugged each other, as is common among crew members coming and going from the station. The images of the crews embracing and wishing each other well stood in stark contrast to the hard rhetoric of politicians and the images of Ukrainian cities shelled and burned, as refugees pour out of the war-torn country.

But the ISS was always meant as a tool of diplomacy as much as a laboratory for science and exploration, a way for the United States and Russia to work together after the end of the Cold War.

NASA hopes this collaboration will continue. It has invested more than $100 billion into the station and now has SpaceX to provide regular crew transportation to and from the station.

The White House recently said it would extend the life of the ISS — which has been continuously occupied for more than 20 years — until 2030. Russia, however, has committed to the station only through 2024. Recently, Russian space agency head Rogozin said the country would “closely monitor the actions of our American partners and, if they continue to be hostile, we will return to the question of the existence of the International Space Station.”

While on the station, Vande Hei, a retired Army colonel who served in the Iraq War, said he became friends with his Russian counterparts. “They are wonderful human beings,” he told CBS News in January. “I definitely think that the space station and our cooperation with the Russians on the space station, in particular, are a great sign of how successful we can be when we get to know each other and to do things that are cooperative, rather than find points of conflict.”

Vande Hei’s record of 355 days on the ISS eclipses Scott Kelly’s 340 days. When Vande Hei launched almost a year ago with Dubrov, who also spent nearly a year in space, he knew there was the possibility it would last longer than the typical six months. But wasn’t sure. NASA ended up extending Vande Hei’s flight to make room for a Russian actress and producer to shoot scenes for a movie on the ISS as well as to ensure there would be a continued U.S. presence on the station.

In all, Vande Hei and Dubrov completed 5,680 orbits of Earth and traveled more than 150 million miles, NASA said.