A pair of massive sunspot swarms, some large enough to devour the Earth whole, have appeared on the surface of the Sun, increasing the chance of an intense solar storm.

Sunspots are dark regions of the Sun where it is cooler than other parts of the surface. Solar flares originate close to these dark areas of the star.

Recently, space weather forecasters spotted two ‘active regions’ known as AR2993 and AR2994 – swarms made up of a number of sunspots – in the past few days.

Solar flares and coronal mass ejections come from these regions, and when they explode in the direction of Earth, they can result in geomagnetic storms that produce beautiful auroras, as well as pose a danger to power grids and satellites.

It isn’t yet clear whether these new dark spot swarms will result in solar flares that hit the Earth, but astronomers predict it is possible in the coming weeks. 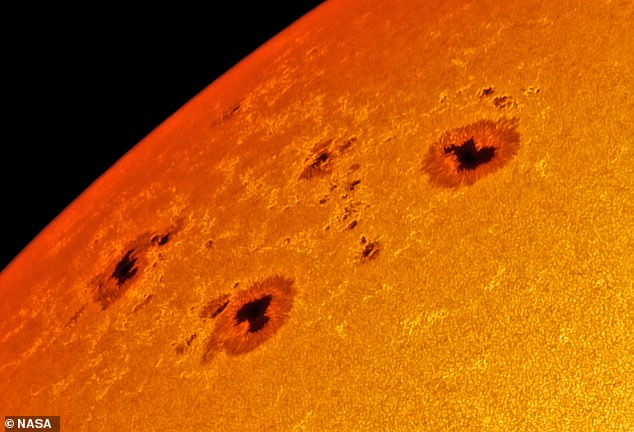 A pair of massive sunspot swarms, some large enough to devour the Earth hole, have appeared on the surface of the Sun, increasing the chance of an intense solar storm

Sunspots are caused by magnetic disruptions in the photosphere of the Sun, exposing the cooler layers underneath – appearing as a black spot.

Solar flares can erupt in these regions, sending plasma and charged particles out into space – some of which head towards the Earth.

When they reach the planet, they run down the magnetic field, creating aurora such as the northern lights, but can also result in power outages and internet issues.

Earlier this month the Earth narrowly missed a plasma ejection, linked to a sunspot group that had appeared earlier on the star. If it had hit the planet, it could have resulted in risks to astronauts in space, as well as satellites and power grids.

The recent increase in activity from the Sun is the result of it coming towards the most active phase in its 11-year solar cycle – hitting peak activity in 2024.

‘I’m sure we shall see larger active regions over the next few years,’ according to solar physicist Dean Pesnell from NASA, speaking to Live Science.

‘Active regions 2993 and 2994 are middling in size and don’t represent the best that Solar Cycle 25 can produce.’ 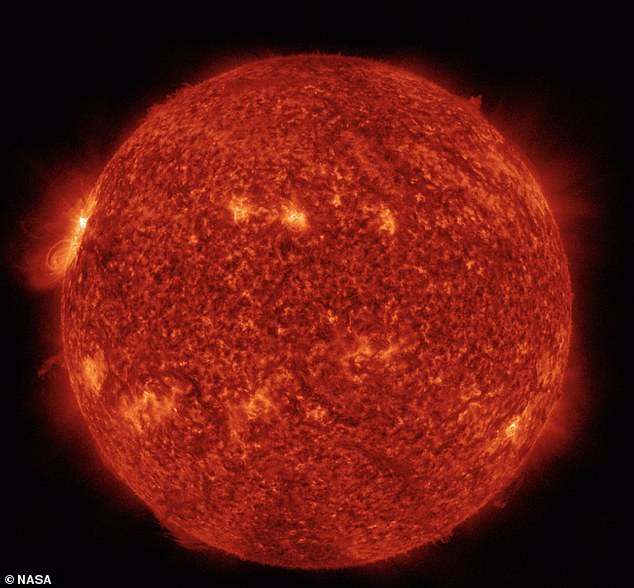 Sunspots are dark regions of the Sun where it is cooler than other parts of the surface. Solar flares originate close to these dark areas of the star

WHAT ARE AURORAS AND WHAT TRIGGERS THE STUNNING NATURAL DISPLAYS?

The Northern and Southern Lights are natural light spectacles triggered in our atmosphere that are also known as the ‘Auroras’.

There are two types of Aurora — Aurora Borealis, which means ‘dawn of the north’, and Aurora Australis, ‘dawn of the south.’

The displays light up when electrically charged particles from the sun enter the Earth’s atmosphere.

Usually the particles, sometimes referred to as a solar storm, are deflected by Earth’s magnetic field.

But during stronger storms they enter the atmosphere and collide with gas particles, including hydrogen and helium.

These collisions emit light. Auroral displays appear in many colours although pale green and pink are common.

Jan Janssens from the Solar-Terrestrial Centre of Excellence in Brussels, told Live Science multiple solar flares and coronal mass ejections are ‘typical at this stage of the solar cycle,’ with some heading towards, but missing the Earth.

‘As the solar cycle is heading for its maximum, more and more complex sunspot regions become visible, which can then produce solar flares.’

Studies have shown that the level of solar activity currently happening, is about the same as it was 11 years ago, during the same point in the last cycle.

Pesnell told Live Science there appears to be a third swarm, hidden from view, that is rotating behind AR2993 and AR2994, that produced a class X1.1 flare on Sunday.

Solar flares have letter classes, with A-class the weakest, then B, C, and M-class, with X-class the strongest of the categories. They are then given a size – small numbers represent smaller flares within the class.

An X1 flare is ten times less powerful than the most intense solar flare possible, and the most powerful on record, from 2003, overwhelmed sensors as an X28.

The Space Weather Prediction Center of the National Oceanic and Atmospheric Administration (NOAA) found that Sunday’s flare caused a blackout at certain radio frequencies below 30 MHz in Southeast Asia and Australia.

Despite the flare causing a radio blackout, the plasma from the flare won’t hit Earth.

There hasn’t been an extreme CME or Solar Flare in the modern world – the last was the Carrington Event in 1859 – creating a geomagnetic storm with aurora appearing globally, as well as fires at telegraph stations.

Solar storms, or solar activity, can be divided into four main components that can have impacts on Earth:

While these may seem dangerous, astronauts are not in immediate danger of these phenomena because of the relatively low orbit of manned missions.

However, they do have to be concerned about cumulative exposure during space walks.

This photo shows the sun’s coronal holes in an x-ray image. The outer solar atmosphere, the corona, is structured by strong magnetic fields, which when closed can cause the atmosphere to suddenly and violently release bubbles or tongues of gas and magnetic fields called coronal mass ejections

The damage caused by solar storms

Solar flares can damage satellites and have an enormous financial cost.

Very large flares can even create currents within electricity grids and knock out energy supplies.

When Coronal Mass Ejections strike Earth they cause geomagnetic storms and enhanced aurora.

A large influx of energy could flow into high voltage power grids and permanently damage transformers.

This could shut off businesses and homes around the world.

‘Intercept It Or Shoot It Down’ (VIDEO)

‘Intercept It Or Shoot It Down’ (VIDEO)