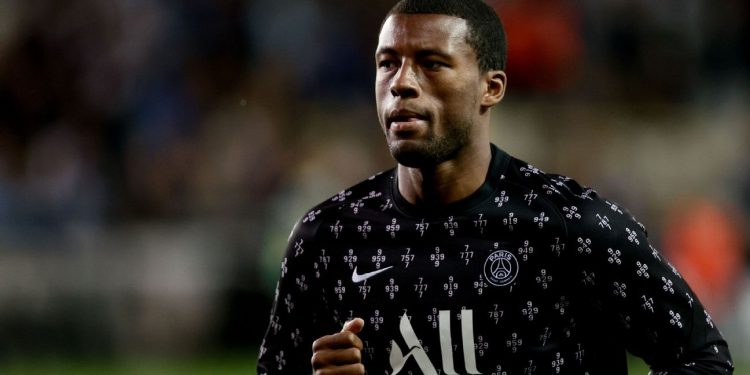 
The 2022 January transfer window is closed, but there’s still plenty of gossip swirling about who’s moving where. Transfer Talk brings you all the latest buzz on rumours, comings and goings and, of course, done deals!

Georginio Wijnaldum made the switch to Paris Saint-Germain last summer as one of a number of star-studded free transfers for The Parisians during the transfer window.

However, it has not quite gone to plan for the Netherlands international, who has struggled to break into the first team since his arrival at the Parc des Princes.

As a result, AS reports a number of teams are eyeing a potential move if the 31-year-old leaves at the end of the season. Among those reportedly interested are Atletico Madrid, West Ham United, Newcastle United and Aston Villa.

Part of Wijnaldum’s struggles in the French capital could be due to the system, with the side often playing a 4-2-3-1 rather than a 4-3-3, which he often played in at Liverpool before the move.

For Atletico Madrid, Wijnaldum is seen as player to fill a void in their midfield ranks, with 27-year-old summer signing Rodrigo de Paul — starting just 15 times in the league this season — having not quite settled into life in LaLiga since his switch from Udinese.

Atleti’s midfield clearout includes the departure of Saul, who scored in Chelsea’s FA Cup win over Luton Town on Wednesday, after leaving the rojiblancos for the Blues on loan last summer, and Hector Herrera on his way Major League Soccer side the Houston Dynamo at the end of the campaign.

Osimhen, 23, has impressed in Serie A for the Azzurri since making his switch from Lille in 2020 for roughly £68m. A mixture of injuries and AFCON duty have kept him out of a number of games, but the Nigeria international has managed to score seven and assist three times in his 17 league appearances this season. His current deal runs until 2025, meaning he could be a tough one for the two chasing sides to attain without offering a significant fee.

– A whole host of clubs are said to be monitoring the progress of Montreal attacking midfielder Djordje Mihailovicreports Calciomercato.

The 23-year-old’s current deal with the MLS side expires in 2023, meaning a number of clubs are eyeing a move. Among them, the report claims, are AS Roma, Bologna, Atalanta, Bayer Leverkusen, Borussia Dortmund, Everton, Newcastle United, Leeds United and Nice. Montreal are supposedly holding out for €8m.

– Bayer Leverkusen are willing to move on young full-back Jeremie Frimpong if an offer matches their demands in the summer, according to Ekrem Konir.

Frimpong, 21, has been a regular feature at right-back for the Bundesliga side since making the move from Celtic last January for roughly £10m. The Netherlands youth international has featured in 23 league games this season, prompting potential interest from other clubs. Leverkusen are said to value him at €30m if they were to move him on in the summer.

– Serie A side Hellas Verona are prepared to sign striker Giovanni Simeone on a permanent deal once his loan ends, reports Nicolo Schira.

Giovanni is the son of Atletico Madrid manager Diego and has impressed for the club this season in his loan move from Cagliari. The 26-year-old has scored 15 goals in the league, with Verona ready to trigger a €10m clause in his loan that will see him stay with the club until 2026.

– International midfielder matias neighbor is set to leave the club at the end of the season as a free agent, says Nicolo Schira.

Vecino, 30, has spent nearly five-years with the Nerazzurribut is willing to leave when his contract expires in the summer. Lazio are said to be particularly keen on a deal, while LaLiga and Premier League clubs are also weighing a potential move.