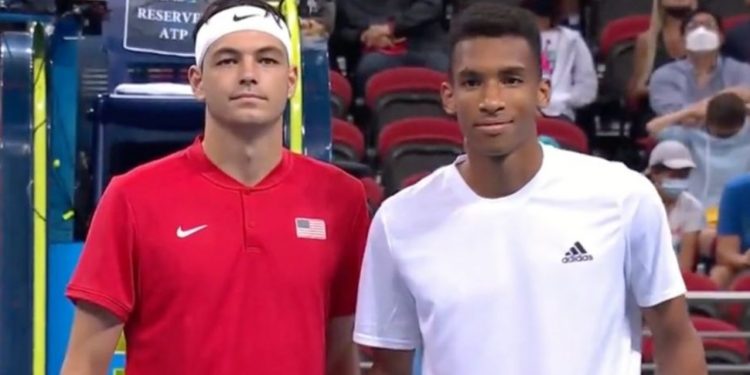 Canada and the US met on day two of the ATP Cup but a hilarious blunder before their second match helped break the tension.

Two traditional rivals went head-to-head at the ATP Cup on Sunday but a hilarious moment before the second of Canada’s clashes with the USA certainly helped break the tension.

The World No. 14 tested positive on arrival in Sydney and while he has since been released from biosecurity protocols, opted to sit the match out.

“I’m disappointed not to be able to play the first match, but I just didn’t feel ready physically yet, so we did what is best for the team,” he said.

The 11th hour withdrawal pushed World No. 238 Brayden Schnur into the limelight, where he was steamrolled in straight sets by American World No. 24 John Isner.

The second clash, contested by World No. 11 Canadian Felix Auger-Aliassime and America’s Taylor Fritz (No. 23) got off to an inauspicious start.

As is customary, the pair posed either side of the net for a picture before the match.

However, no photographer turned up to capture the top-seeded players from the rival nations, leaving the players smiling into the abyss.

“There’s no photographer, you can leave,” said a match official, realising the error.

The players then dispersed for what began as a tightly-fought contest.

Later in the day, fans will get their first peek at the Aussies, who face a difficult task if they’re hoping to start their campaign off on the right foot.

In the second of the earlier match-ups, Russia was pitted against the French, who were a last-minute inclusion after Austria withdrew in the days before the new year.

World No. 167 Roman Safiullin caused a major upset by defeating Arthur Rinderknech (No. 58) from a set down in the first match.

The win puts Russia in the box seat ahead of the final two matches, the first of which will be contested by world No. 2 Daniil Medvedev, who looms as the ATP Cup’s headline act after Novak Djokovic pulled out.

Medvedev swept all four of his matches to guide Russia to ATP Glory last year so will be hoping to lead by example again when he faces Ugo Humbert on Sunday afternoon.

The towering Moscow native knows better than most that the ATP Cup can provide a golden opportunity for players to hit the ground running at the start of the calendar year.

He went on to have a career-best year after Russia took out top honours in last year’s event – by winning the US Open, his first Grand Slam title, he became the only man other than Djokovic to win a Grand Slam in 2021.

He also won in Mallorca, Marseille and at the ATP Masters 1000 in Canada and made the final of the Australian Open.

Strictly winner Joanne Clifton, 38, broke down in tears when she was told she has arthritis

Strictly winner Joanne Clifton, 38, broke down in tears when she was told she has arthritis