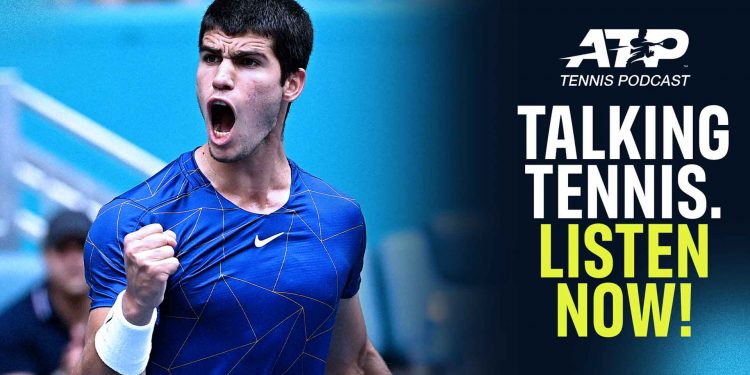 
This week on the ATP Tennis Podcast, presented by Seb Lauzier…

STEFANOS TSITSIPAS MONTE CARLO WINNER’S INTERVIEW: ‘I’m very proud of myself. Things didn’t seem to be going well at one point but I managed to keep well composed and kept believing that I could finish it off. I’m really proud of the belief I put into my game. Sometimes you doubt yourself but it’s important to keep your head high and do the best you can.’

GRIGOR DIMITROV ON HIS BACKHAND SLICE: ’Slice is a volatile shot and it’s one of the first shots I actually learned, I think it’s the first shot my dad taught me and I think especially for one-handers it’s vital. Against any opponent, if you’re able to find the right way of using it and putting the ball in the right spot, it really gives you an advantage to look at the right shot.’

CRAIG BOYNTON ON PLAYERS TRANSITIONING TO CLAY: ‘It would be like running on wood and now you have to skate. It usually takes a couple of weeks for most to feel comfortable and not even having to think about movement, just more in strategy and you’ll see this as the clay court season progresses.’

JANNIK SINNER ON HIS WITHDRAWAL IN INDIAN WELLS DUE TO BLISTERS: ‘Well it’s the most frustrating thing, because the worst thing for me is to lose without competing. We try to find solutions in the best possible way so it’s not going to happen anymore, but I’m happy right now that I don’t feel anything, the body is good, the body is safe and let’s see in the next couple of months if something happens and if not, we have to change.’

JUAN CARLOS FERRERO ON ALCARAZ’S DEVELOPMENT: ‘He’s growing up match-by-match, but of course he’s surprising me week-by-week because after very important things happen to him and this level that he’s doing, he’s handling very good and it seems like everything is normal to him and he tries to do things as normal as he can, but life is changing for him and then team, but the good thing is that I have a lot of experience of that.’