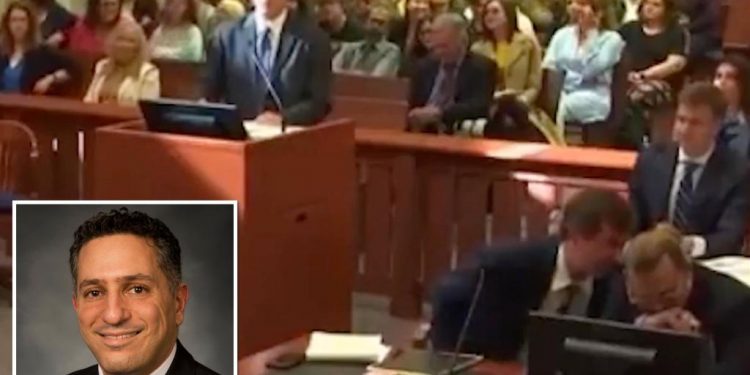 One of Amber Heard’s attorneys objected to his own line of questioning during Johnny Depp’s $50 million defamation lawsuit against the actress – seemingly prompting the “Pirates of the Caribbean” star to chuckle in court.

Attorney Adam Nadelhaft goofed Monday after Depp wrapped up four days on the witness stand in Fairfax, Virginia, where jurors earlier heard the actor calling Heard a “c–t” in a recording played in court.

At one point during testimony Monday, Nadelhaft was questioning Ben King, Depp’s house manager, regarding the 2015 fight between Heard and the actor in Australia that left him with a severed finger.

“You didn’t know what could cause damage to Mr. Depp’s hand while you were there on March 8, correct?” Nadelhaft asked King.

King testified a doctor told him that Depp sustained an injury to one of his fingers, prompting Nadelhaft to quickly cut him off, video shows.

Depp and his attorney appeared to be amused by the in-court gaffe, seemingly giggling after Nadelhaft’s moment of confusion as the actor put a hand to his mouth.

Nadelhaft proceeded to question King, who told jurors about finding part of Depp’s severed finger “directly below the bar” and that the couple caused at least $50,000 in damage at the Australian property rented by Depp and Heard in 2015.

Depp had previously testified his finger was cut when Heard hurled a bottle of vodka at him during the fight, which she had denied while claiming her former husband cut himself during a three-day, drug-fueled bender.

Depp, 58, is suing Heard, 36, over a 2018 op-ed she wrote in the Washington Post on domestic abuse. The “Edward Scissorhands” star wasn’t named in the piece, but he claims it clearly referenced him and ruined his career, costing him tens of millions of dollars.

Attorneys for Heard, meanwhile, claim Depp physically and sexually abused her while insisting Depp’s denials were not credible since he was often drunk or high.

Earlier in the day, jurors heard a recording of Depp telling Heard that he would never stop drinking or using drugs.

“I want you to be clean and sober so we can fix all of our problems,” Heard said on the clip.

Attorneys for Depp, meanwhile, are expected to continue calling witnesses as the trial continues this week.

Aspirin no longer recommended to prevent 1st heart attack, stroke for most adults over 60 – ABC News