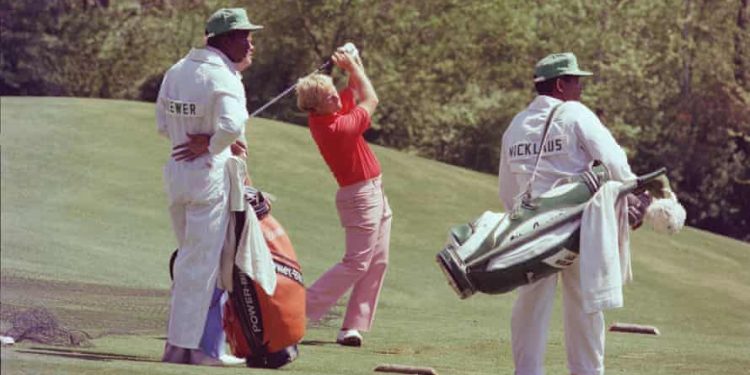 
Cedar Grove cemetery is across the city from the Augusta National, the other side of two sets of railway tracks in a part the traffic doesn’t stop and the tourists don’t pass. The plot was set the aside in 1820 as a place to bury slaves in shallow, unmarked, graves.

Over time it turned into the black cemetery, the city’s first black principal is buried there, the first black dentist, the first black member of the local legislature. “Because there is no definitive book on African-American history Cedar Grove is the bastion of our cultural heritage,” said local historian Joyce Law when the cemetery marked its bicentennial, “this is where the stories are.”

The cemetery is a little broken, cracked and tumbledown now, overgrown with chickweed, but there are some well tended corners in there too. Like the patch set aside for Willie Peterson Jr. He worked as a caddie at Augusta National and carried Jack Nicklaus’s bag for five of his six Masters wins in 1963, ’65, ’66, ’72 and ’75. Peterson died of lung cancer in 1999. For 20 years, his remains were in an unmarked grave. When Nicklaus found out about it through the golf writer Ward Clayton, he paid for a new headstone himself. The stone lists their achievements together and has an engraving of Peterson in his caddie’s outfit.

It’s not just Peterson. A similar thing happened with Arnold Palmer’s old caddie, Nathaniel “Iron Man” Avery, who was on the bag for each of his four wins in 1958, ’60, ’62, and ’64. Avory died in 1985, and is buried over in Southview Cemetery, but only got a headstone in 2019 with help, this time, from the Palmer Foundation.

Augusta National has stories too, just like Cedar Grove. At the Champions’ Dinner on Tuesday night, Hideki Matsuyama will have heard some of them for the first time. Eventually, as he keeps coming back here over the years, they’ll become as familiar to him as they already are to some of the other people at the table, who have heard them told five, 15 or 50 times already.

If you’ve been following the Masters long enough you’ll likely know some of them yourself. The stories from the days when the club insisted that players had to use one of their local caddies are part of the lore of the place, like how Willie “Cemetery” Perteet got his nickname when he was nearly killed in a knife fight after he was caught sleeping with another man’s girlfriend. And how Walter “Cricket” Pritchett tried to hide from the cameras when he was carrying the bag for Charles Coody in 1971 because he had told his boss at his day job that he was taking the week off work to visit his sick grandmother in Houston. They’re good stories, apparently some of them are even true, but the punchline is usually to do with the caddies playing rude mechanicals.

“My mum and dad were working at King Mill at the time, and they were only making 15 or 20 dollars a week,” said Jerry Beard, who caddied for Fuzzy Zoeller when he won here in 1979, in a short film produced by the Lucy Craft Laney Museum of Black History, “get a good bag at Augusta National and you might make 20 dollars that day.”

Some of them, such as Jim Dent, took what they learned there as caddies and used it to build a career in professional golf. Dent turned pro in 1966, and ended up winning 12 events on the senior PGA Tour. And some ended up in unmarked graves.

Which isn’t how history works for everyone else who has been part of the Masters. The past’s ever present up there at the club, where they have the Hogan Bridge, the Nelson Bridge and the Sarazen Bridge, a Jack Nicklaus plaque, an Arnold Palmer plaque, Eisenhower’s pond and cabin, the table they made out of his oak tree after it fell down, and a trademark on the phrase A Tradition Unlike Any Other. The media eat in a canteen artfully designed to resemble the original Quonset press hut they built in the 1950s, with a wall of framed and mounted photos showing the presidents of the Golf Writers’ Association of America.

Nicklaus’s decision to pay for a permanent marker for Willie Peterson Jr feels like it’s part of an overdue reckoning with this piece of its history, an attempt to mark it with something more than just another retelling of the old stories.

It sits alongside the club’s decision to finally honour their first black player, Lee Elder, by inviting him to be an honorary starter at last year’s tournament. They did that just in time. Elder died seven months later. This year that third place on the first tee on Thursday morning has been taken by Tom Watson, who has his own role in this story, too. Watson was instrumental in Augusta National’s decision to finally allow players to use their own caddies in 1983.

There are plans for the city to put up a permanent monument in Sand Hills, outside the club’s boundaries, “the caddies and the cooks, the chauffeurs, the groundskeepers all came from this neighborhood,” said Law, “so to have them honoured and known individually is very important.”