Australia — who is chasing its first men’s T20 World Cup title — take on the Black Caps in Dubai after completing an enthralling run chase in its five-wicket win over Pakistan in their semi-final on Friday (AEDT).

The Black Caps reached the final after seeing off a heavily favoured England outfit with a five-wicket victory a day earlier.

Finch said Australia knew what to expect from the Black Caps.

“Any time you play New Zealand you know how great a contest it’s going to be,” Finch said.

“They’re so disciplined in all three facets of their game.

“Their fielding is outstanding and they are a team you have to be on for all 40 overs if you’re going to get over the line.

“They are really well led by Kane [Williamson] and regardless of how they’re going they seem to hang around for long enough in any kind of contest and wear you down.

“They fight and scrap in every situation and they’re a great side.” 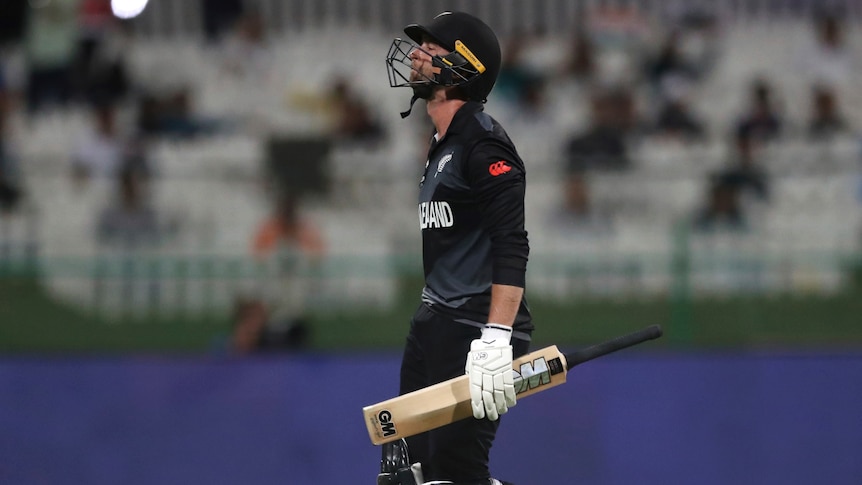 An outburst of frustration leaves Devon Conway nursing a broken hand following New Zealand’s semi-final victory over England, ruling the wicketkeeper-batter out of the tournament decider against Australia.

It has not been smooth sailing for Australia against the Black Caps in recent times.

The Black Caps won the last T20 series between the two sides 3-2 earlier this year, with Devon Conway and Martin Guptill proving devastating with the bat.

Conway will be unavailable, having broken his hand while punching his bat in frustration after being dismissed in the semi-final win over England.

Despite Conway’s absence, Finch said Australia would still have to be at its best to get past the Black Caps.

“Conway has been such a consistent player for them,” he said.

“He plays spin really well through those middle overs so that will be a big loss.

“But they have a really good squad and whoever they bring in for that role will still be a really big challenge.”

Will ChatGPT take my job? Experts reveal the five professions at most risk from AI

Will ChatGPT take my job? Experts reveal the five professions at most risk from AI