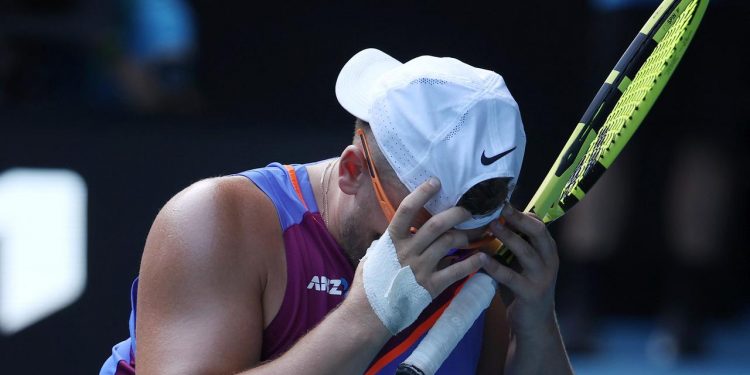 Australian of the Year Dylan Alcott has been denied a dream farewell after he suffered a sad final send-off from the Australian Open.

Dylan Alcott is retiring as a champion even after his party was crashed by rival Sam Schroder in a thrilling men’s quad wheelchair final on Thursday night.

The Australian of the Year is walking off the court for the final time after he was upset 7-5 6-0 in a result that has completely deflated the home Aussie crowd at Melbourne Park.

And in the evening, world No. 1 Ash Barty, who has never featured in an Australian Open final, will take on American Madison Keys in the women’s singles semi-final at 7.30pm local time.

Dylan Alcott has been denied the dream farewell after he was beaten by rival Sam Schroder in straight sets on Thursday evening.

The 31-year-old’s rollercoaster week was all too much for him and he was visibly flat after coughing up the first set. He had just two days earlier been honoured as the 2022 Australian of the Year.

From there, Schroder blasted his way to a 7-5 6-0 win, where he won nine consecutive service games.

It will haunt Alcott for a long time that he had a chance to serve for the first set — but let the opportunity slip.

It sucked all the air out of the parochial Australian crowd.

There had been an animated cheer for Alcott as he made his way onto Rod Laver Arena.

It was even louder in the first set when he secured an early service break.

However, the fairytale didn’t materialise straight away with Alcott committing a series of errors to lose his service game.

He was heard saying, “Far out” at the end of the game.

He was left muttering to himself as he made his way off the court when Shroder took the first set with his third set point.

Alcott never recovered and couldn’t find a way to trouble Schroder in the final set.

He was cheered off as a champion should during the official post-match trophy presentations.

Australian duo Nick Kyrgios and Thanasi Kokkinakis have secured their place in the men’s doubles final at Melbourne Park, setting up an all Aussie encounter for the decider on Saturday evening.

They were wildcards leading into the tournament, but Kyrgios and Kokkinakis — affectionately dubbed the “Special Ks” — claimed a huge upset on Thursday afternoon.

The two Aussies quickly become one of the major talking points in the Melbourne-based grand slam tournament, with their antics at Kia Arena drawing huge crowds.

Granollers and Zeballos were greeted by a mix of boos and cheers as they entered Rod Laver Arena, while there was a considerably louder reaction from the Melbourne spectators when the Aussies walked onto the court.

Kyrgios threw his arms up in the air as he entered the venue, spurring the crowd on — he certainly knows how to engage with his fans.

“The chemistry is where it starts, they bring a level of presence out on the court,” former Aussie doubles champion Mark Woodforde said on SEN.

“They don’t play traditional style of doubles, but they’re combining well as a team.”

After winning the first point, Kyrgios was already showboating on the court, revving up the crowd at the net and cracking jokes with Kokkinakis.

A loud roar of “Siuu” echoed around the venue, a chant that has drawn a mixed reception in Melbourne Park this week.

Although the Rod Laver Arena crowd was vocal, the spectators were considerably more subdued than the chaotic scenes witnessed at Kia Arena over the past few days.

On a few occasions, the chair umpire had to ask the spectators to be quiet between serves, but far less often than previous matches involving the Special Ks.

Aussie sporting royalty Rod Laver and Steve Waugh were both spotted courtside, and Channel 9 cameras showed a cluster of tennis stars watching the action on TV screens around Melbourne Park.

The opening 10 games of the first set remained on serve, with Kyrgios’ powerful serve once again a force to be reckoned with.

At 5-5, Kyrgios threw his racquet onto the court in frustration following an unforced error on his backhand. Soon after, Kokkinakis was awarded a time violation for taking too long between his serves.

But the Aussies held their nerve, with a well-directed forehand sending the opening set to a tiebreak.

The Special Ks found themselves with three set points in the tiebreak, but they only needed two to take the opener on Rod Laver Arena.

Momentum was firmly in favour of the Australians when the second set got underway, with the Special Ks immediately clinching three break points at 1-0.

The Aussies duo couldn’t convert the three chances into a break, but even though the game went to deuce, they showed their class to take a 2-0 lead regardless.

The pressure started to get to Kyrgios at 4-2, with the Aussie screaming at the chair umpire when a couple of serves were called as lets.

Not long after, he yelled at a group of spectators who were making noise while he was serving, throwing a tennis ball into the wall.

“When are you going to control the crowd, bro?” Kyrgios screamed at the chair umpire.

Kyrgios and Kokkinakis managed to save two break points, but when their rivals put the second set back on serve at 4-4, the 26-year-old destroyed his racquet by viciously throwing it onto the court.

The Special Ks suddenly had two match points at 5-4 up, and Kokkinakis secured the stunning victory with a well-placed lofted shot.

The Aussie pair clumsily embraced on the baseline while celebrating the triumph as the Melbourne crowd went berserk.

“I’ve played a lot of singles matches around the globe with great atmospheres. This week playing with Thanasi in front of you. Nothing beats this. It’s insane,” Kyrgios said after the victory.

Kyrgios and Kokkinakis gave 2022 Australian of the Year Dylan Alcott a huge as they exited the venue.

Meanwhile, over on Margaret Court Arena, Australian pair Matthew Ebden and Max Purcell defeated the No. 2 seeds Rajeev Ram and Joe Salisbury in straight sets to qualify for the men’s doubles final as well.

It’s been 42 years since the most recent All-Australian men’s doubles final at the Australian Open.

Australian Olympian Sam Groth has taken a cheeky swipe at New Zealand doubles player Michael Venus after he lashed out at Nick Kyrgios on live TV.

Venus and German playing partner Tim Puetz were beaten in three sets by Kyrgios and fellow Australian Thanasi Kokkinakis in the quarter-final of the men’s doubles in front of a raucous crowd that the Aussie pair whipped into a frenzy.

“You see why he’s never fulfilled his potential and probably never will,” Venus said.

“His maturity level, it’s probably being generous to about a 10-year-old, it’s at about that level.”

Speaking on Channel 9, Groth couldn’t resist pointing out that Venus was making these remarks after being knocked out of the Australian Open.

“He’s doing it from New Zealand,” he said on Thursday morning. “He’s not doing it from here in Melbourne Park because he lost in the tournament.

“Throw barbs, but you’re out of the tournament bud. Sorry Michael, I like you a lot, but there’s a time and place.

“I get it, the crowd’s rowdy, Nick’s rowdy — but you were giving it back, you were part of it, you were in that battle. I’m not convinced it was the right way to go.

“I have known Michael for a long, long time. He is understandably a little bit bitter the way things went down. It’s a different crowd.

“Some of the antics were probably a little bit over the top, to be honest. But his is an entertainment product. We are producing it for the fans that come into the stands, and we’re producing it for television and getting eyeballs on the screen that wouldn’t normally be watching.”

— with the NZ Herald

Ash Barty is two victories away from a maiden Australian Open title and the Aussie’s slice backhand has once again been the talk of the town.

Speaking to reporters on Wednesday, Barty’s coach Craig Tyzzer poked fun at opponents who were spotted practising facing the trademark shot ahead of their match against the world No. 1.

“I think it is a point of difference,” Tyzzer said of Barty’s slice. “There’s not many girls out there that hit a slice backhand.

“I think the fact that they don’t see it that often and then have to come up against it – it’s actually quite funny.

“When you see who Ash has to play you see them out there practising (against) someone hitting a slice backhand to them. It’s probably a bit late the day before to try to get that right. If you haven’t practised it enough now you’re probably not going to get that right.

“Her forehand is actually a weapon.