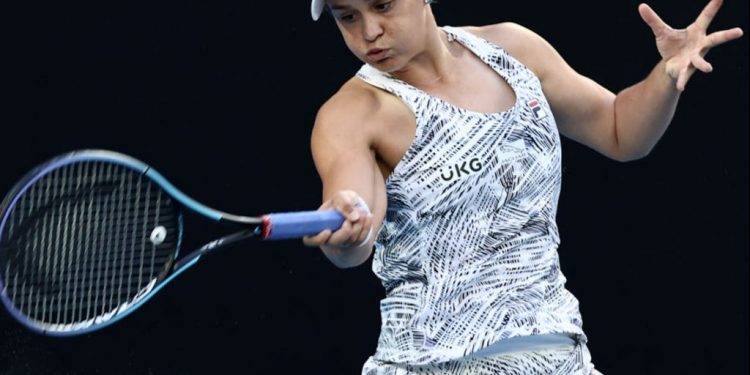 Follow all the action as the Australian Open 2022 gets underway in Melbourne.

After all the drama surrounding Novak Djokovic’s visa cancellation was finally settled on Sunday, attention finally returned to the actual tennis and a packed singles schedule on Monday. In the women’s draw, there was an early upset as Coco Gauff was defeated in straight sets by world No 110 Qiang Wang. However, there were no such difficulties for defending champion Naomi Osaka, who cruised past Camila Osorio. Maria Sakkari and Elina Svitolina were among the other big names to secure their spot in the second round, while home favourite and world No 1 Ashleigh Barty faces Lesia Tsurenko on Rod Laver Arena this morning.

In the men’s draw, where a new champion is now guaranteed to be crowned, a familiar face in Rafael Nadal staked his early claim, brushing aside Marcos Giron in straight sets. There was disappointment for Cameron Norrie, though, with the Briton, who was seeded 12th in the draw, thrashed in clinical fashion by young American Sebastian Korda. Wimbledon finalist Matteo Berrettini recovered after losing the first set against Brandon Nakashima, while the fiery Canadian Denis Shapovalov also made it through in four. No 3 seed Alexander Zverev is in action later this morning. Follow all the latest updates, scores and results below:

Ashleigh Barty could hardly have dreamed of a smoother start to her Australian Open campaign.

She leads 6-0 4-0 and the match can barely qualify as a contest. Tsurenko’s serve is far too timid and has been swatted away throughout with total nonchalance.

Barty will benefit from another kind draw in the second round, where she is set to face qualifier Lucia Bronzetti. The Italian is actually ranked 25 places below Tsurenko and is unlikely to pose a much greater test.

Becker: Easiest things for Djokovic is to get vaccinated

Becker added that he believes the easiest thing for Djokovic to do remains to get the vaccine and fears the Serbian could otherwise face more issues at the grand slams going forwards.

“Australia is his favourite tournament, he has won it nine times,” Becked said. “He wanted to break the record of 21 [grand slam singles titles]. There was no better chance for him than to play in Melbourne. Now, this chance is taken away, so I think deep down, he will be very frustrated.

“It is the ultimate question [if he will get vaccinated]. Life would be easier for him and anyone else who gets vaccinated. I think we all are, but the world is divided and he is the most famous of the anti-vaxxers.

“I’m sure the French Open has watched this saga; I’m sure Wimbledon has watched it. Let’s see, but the government restrictions will be there in May and June, I’m sure. Let’s see what Novak does. The way out, the easiest thing for him, would be to get vaccinated.

“It is tough enough to win a tennis tournament. Now his struggle is to get the right documents in order to participate in one. It’s crazy the world we live in, but that is the way it is. I think we have all had two years to accept it, and there is no other choice.”

Becker: No winners from Djokovic saga

Boris Becker is part of Eurosport’s team out in Melbourne and the six-time grand slam champion, who of course coached Novak Djokovic from 2014-2016, has been speaking about the government’s decision to deport the Serbian.

“I always had a bad feeling about this,” Becker said. “Any government is bigger than any individual. I was a bit surprised that the court ruled in his favour on Monday of last week, but obviously the government had the last word.

It’s been a ruthless start by Ashleigh Barty, who wins the first set to love against Lesia Tsurenko in just 24 minutes.

The Ukrainian looks very out of her depth and has no answer to Barty’s precision and power.

Australian Open 2022: Norrie and Gauff stunned in first round

There was bad news for British fans overnight as Cameron Norrie’s hopes were left in tatters. Norrie, who was seeded as high as No 12 heading into the tournament, didn’t benefit from a kind draw, with 21-year-old Sebastian Korda considered one of the rising stars of American tennis. That proved to be the case, with Norrie unable to answer Korda’s big serve and quickly falling to a damning 6-3 6-0 6-4 defeat.

Another upset came at the expense of Coco Gauff. The 17-year-old American was a considerable favourite against Qiang Wang but was beaten 6-4 6-2 on Margaret Court Arena. Wang was once ranked as high as No 12 in the world but endured a difficult 2021 and fell outside the top-100.

World No 1 Ashleigh Barty would undoubtedly be the most popular winner in Melbourne, and she’s made an ideal start in her first-round match against Lesia Tsurenko on Rod Laver Arena, breaking the Ukrainian straight away to take a 2-0 lead in the first set.

Rafael Nadal reserved little sympathy for Novak Djokovic last week and will know this year represents the best of his remaining chances to win a second Australian Open title – his first in Melbourne coming all the way back in 2009.

The Spaniard, whose 2021 was wrecked by injury, started in an authoritative fashion against Marcos Giron, thrashing the American 6-1 6-4 6-2 in an hour and 51 minutes.

“The last six months have been tough,” Nadal said afterwards. “Being outside of the competition, but since the first lockdown in 2020 everybody knows I’ve had a foot injury since the beginning of my career. I was able to manage it more or less well. After that, two months being at home, it has been very challenging since then.

“I was able to play at the end of 2020 and the beginning of 2021, but I have had very tough moments with a lot of doubts. I can’t be happier to be back here in Australia in this amazing stadium. It’s fantastic for me.

“When you come back from injury, things are always difficult. You have to go day-by-day. You have to forgive yourself when things are not going your way. Staying positive, playing with the right energy and being on the tour practising with the guys and winning matches for sure helps.”

After making the perfect start to 2021 by winning her second Australian Open title, Naomi Osaka spent a significant amount of time away from the court last year as she prioritised focusing on her mental health.

The defending champion, who had not competed since losing in the third round of the US Open before returning for last week’s warm-up event in Melbourne, showed no sign of rust though as she cruised to a straight sets victory over Camila Osorio Serrano on Rod Laver Arena overnight.

“I thought I played pretty well given the circumstances,” said Osaka. “Overall I’m happy to be here and see everyone in the audience. I like the hot conditions but when I come here everyone is warm and welcoming. I’m sure that has a positive effect on me.”

Osaka will now face Madison Brengle in the second round.

Welcome to The Independent’s live coverage as, after all the drama over Novak Djokovic’s visa cancellation, the Australian Open finally got underway on Monday without its men’s champion.

The nine-times champion’s absence has blown the men’s draw wide open, with Rafael Nadal, Matteo Berrettini and Denis Shapovalov among those to secure their spot in the second round overnight. There was no such luck for Briton’s Cameron Norrie, though, who was outgunned by the American Sebastian Korda.

There were few difficulties for the women’s defending champion, Naomi Osaka, who breezed past Camila Osorio. Maria Sakkari, Victoria Azarenka and Elina Svitolina both advanced to the second round, but Coco Gauff fell to a disappointing upset, defeated in straight sets by China’s Qiang Wang.

Still to come this morning, women’s No 1 Ashleigh Barty begins her quest to win on home soil against the Ukrainian Lesia Tsurenko. Americans Madison Keys and Sofia Kenin meet on John Cain Arena, while Ajla Tomljanovic, who defeated Emma Raducanu in the fourth round at Wimbledon last year, takes on the in-form No 8 seed Paula Badosa.