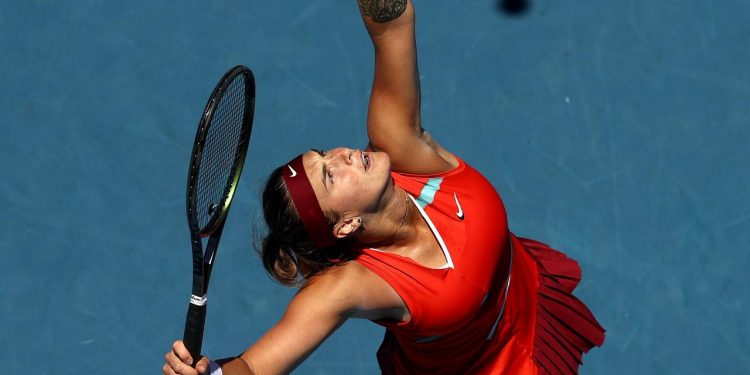 The record of women’s star Aryna Sabalenka has gone from bad to worse. And the stats expose a major flaw for the world No.2. FOLLOW DAY 4 LIVE.

To say women’s star Aryna Sabalenka has struggled with her serve would be a dramatic understatement.

The world No.2’s humiliating first serve record has gotten worse in her second round match against Wang Xinyu, hitting six double faults in the opening game – including on break point.

It brought up a dismal yet incredible stat for the Belarusian.

Sabalenka has hit 117 second serves in 2022 and 57 of those have resulted in double faults – that’s almost half of her second serves!

SCROLL DOWN TO SEE THE LATEST NEWS

This story will automatically refresh every 60 seconds
(all times AEDT)

Aussie wildcard Chris O’Connell has taken out a gruelling first set against 13th set Diego Schwartzman in a tie-break.

Meanwhile, sixth seed Anett Kontaviet has been bundled out in straight sets by rising 19-year-old Clara Tauson, with the Norwegian winning 6-2, 6-4.

And another upset is brewing, with Alize Cornet closing in on a win over third seed Garbine Muguru after winning the first set and up a break in the second.

But Kyrgios has called for the doors to be thrown open.

The Victorian government has dictated that the stadium be at 50 per cent capacity for the tournament, with tickets for tonight officially sold out at lunchtime.

Arthur Rinderknech is out of the Aus Open and Dan Evans gets into round three without stepping on court. The Frenchman has not yet confirmed the reason to withdrawing but there is a suggestion it is due to a wrist injury.

Emma Raducanu’s latest Grand Slam victim insisted ‘we’ll be here when she comes down’ in an apparent swipe at the British superstar.
And the US Open champion was told she ‘has a lot to learn’ on the tennis tour. Raducanu, 19, continued her winning streak at majors by beating Sloane Stephens 6-0 2-6 6-1 on her Australian Open debut.
She opened the match with one of her trademark forehand winners to go 15-0 up in the first game. The No17 seed then shouted a huge ‘come on’ inside the Margaret Court Arena.
But sour Stephens, who won the US Open in 2017 but is ranked 67th in the world, did not take kindly to the Bromley ace’s mind games.
Assessing the first-round defeat, she said: “Everyone saw after the first point she gave like a massive scream.
“She played me, someone she’s ranking-wise supposed to beat.
”Because she is so young it’s definitely a long road, so there’s going to be a lot of ups and downs.”I think she has just a lot to learn.
“I was talking to someone in the locker room and I’m like, ‘We’ll be here when she comes down.’”
But to avoid sounding too bitter, Stephens quickly added: “Not Emma but just in general.
”It all is like a cycle, and I think learning how to deal with it early on is the best way to handle it.”Just because there’s always a lot of ups and downs in tennis.”

11:15am INSANE PRICES FOR MERCH
If you’re heading to the Australian Open this year and want to leave with a souvenir, you might want to think again with fans expected to fork out insane amounts for a little merch.

Is it lined with gold I hear you ask?

No, it’s just a bottle that you can put water in, and drink from.

Insane right.
Ralph Lauren is the official outfitter of the Australian Open clothing, so pricing is eye-watering.

The Australian Open 2022 beach towel is $77, it will cost you $95 for a branded panama hat and if the AO decorated surf board takes your fancy, prepare to cough up $1,300.

Good news for fans, there is a sale section online where you can purchase 2021 items.

It’s not just the merchandise that’s riled the public with drinks and food also extortionate.

“It was absolutely ridiculous, the prices,” a punter told 3AW.

Novak Djokovic has joined the fight to rid the world of Covid-19, according to the chief executive of a biotech firm who says the world No 1 is a huge investor.

Ivan Loncarevic, CEO of Danish biotech firm QuantBioRes, refused to be drawn on the dollar value Djokovic had invested in the company but confirmed he invested in June 2020.

Serbian newspaper Politika reports “Jelena and Novak Djokovic have been owners of the Danish company since June 3, 2020.

“According to the Danish business register, Jelena’s share is 39.2 per cent, and Novak’s 40.8 per cent.”

According to reports, QuantBioRes has 11 researchers working across Denmark, Australia and Slovenia, but their work is geared towards a treatment, not a vaccine.

Tests are expected to start in the UK this year.

A spokesperson for Djokovic did not immediately respond to a request for comment.

9am TILEY IS A WANTED MAN

Craig Tiley will be “headhunted” in a heartbeat if Tennis Australia sacks its gagged chief executive over the Novak Djokovic debacle, according to the man who resuscitated live sport in Australia when coronavirus first shut down the country.

Australian Rugby League Commission chairman Peter V’landys exclusively told News Corp he was flabbergasted at the raging criticism of Tiley, given his sparkling record across 17 years that have transformed the Australian Open into a worldwide event.

“As far as Craig Tiley’s concerned you have to look at what he actually did (with Djokovic). What he tried to do was to act in the best interests of his organisation,” V’Landys said.

“That’s what he’s done. He hasn’t done anything that is untoward. You have to judge people on the total picture, and not on one per cent of it.”

8:42am PLAYERS AREN’T BEING TESTED

German superstar Alexander Zverev has lifted the lid on the Australian Open’s terrifying Covid crisis, revealing he suspects Covid-positive players are competing at this year’s event.

And the Olympic gold medal winner is going to extraordinary lengths to protect his title hopes this year.

On Wednesday, Frenchman Ugo Humbert explained he tested positive to Covid just hours after being eliminated from the tournament by countryman Richard Gasquet – and Zverev believes he’s far from the only athlete who could be carrying the virus.

The freedom afforded players, who this year can mingle with the public in bars and restaurants, could lead to a rise in players testing positive according to Zverev

“I think this year in Australia is a lot more cases than last year, simple as that,” Zverev said after thumping Australia’s John Millman in straight sets to advance to the third round, where he will face qualifier Radu Albot.

leaked email from the ATP has confirmed Novak Djokovic is set to be banned from this year’s French Open under new vaccination rules.

On Monday, the French health ministry announced vaccine passes will be required for visiting athletes for upcoming events. World No1 Djokovic, 34, was sensationally kicked out of Australia after his visa was cancelled following a long row regarding his anti-vax status.

France are set to introduce rules that will see the Serbian – one of just three players inside the world’s top 100 to have not been vaccinated – denied the chance to fight for his 21st Grand Slam in Paris.

And the ATP – the governing body of professional men’s tennis – has sent a blunt email to players informing them of the coming changes.

The email, seen by Tennis Majors, read: “[Players] have been informed by the French Tennis Federation that legislation will soon be passed by the French Government prohibiting non-vaccinated athletes from competing in any sporting event.

“It is currently uncertain whether players who have recently recovered from Covid-19 will be allowed to compete unless they have completed at least one dose of a two-dose vaccine.

“Further clarification from the French Government is required.”

Looking to further clarify the update, the message continued: “Non-vaccinated players will be unable to compete at tournaments in France.

“Players will have to be fully vaccinated to be eligible to compete, OR have a medical certificate that exempts them from vaccination due to medical reasons.

“Please note that no travel or other exemptions will be available.”

Earlier in the week, the French sports ministry said: “The rule is simple.

“The vaccine pass will be imposed, as soon as the law is promulgated, in establishments that were already subject to the health pass.

“This will apply to everyone who is a spectator or a professional sportsperson. And this until further notice.”

Originally published on The Sun

It is day 4, otherwise known as Australia Day at the Open or in my book Nick Kyrgios set to stun the world Day. Not many expect the Aussie to come through his clash with Medvedev tonight but stranger things have happened right? Remember Wimbledon 2014? Nick beat Rafa. Never say never folks

Lots of news to get through. Let’s get into it.