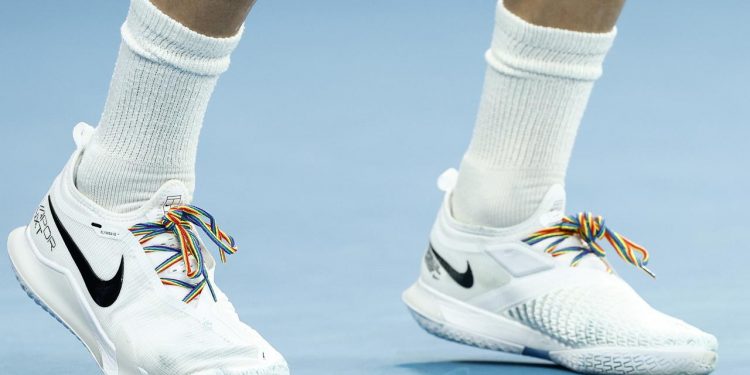 In all the mania of the Nick Kyrgios show, one of the omst important messages of the Australian Open may have been missed.

He may have lost to Nick Kyrgios in the opening round but Liam Broady left an important message at Melbourne Park.

This is a sport for everyone.

In the absence of any openly gay players in the men’s tour, Broady said it was important that he, and others, did whatever they could to highlight the importance of inclusivity.

So in a show of support to the LGBTQ+ community, Broady wore rainbow laces for his blockbuster clash against the Aussie superstar on John Cain Arena.

Afterwards he said: “I just kind of wanted to send the support.

“I know obviously within men’s tennis – is it a taboo? I don’t think it’s really a taboo, but I’ve seen questions before about why there aren’t any openly gay men on the tour, and I just wanted to kind of voice my support in that general area.

“And the LGBTQ community, I mean, a lot of those guys have given me a lot of support throughout my career and have been there since day one, so I kind of wanted to give a thank you in my own sort of way.”

Broady was then asked if he felt tennis was a sport with a culture preventing players from being open about their sexuality. To which he said: “I don’t think so. I guess the society we live in there’s a culture like that, right? Especially in sport.”

The British qualifier also made mention of A League player Josh Cavallo who has suffered online trolling and abuse since coming out last year.

“I saw that the first openly gay footballer just came out in Australia. And it’s difficult, right? I mean it’s a big thing to do and at the end of the day in the 21st century, it’s pretty rubbish that people don’t feel like they can be openly gay. It’s quite sad, really.

“If there are people in the locker rooms and you kind of… you don’t want to force them to come out, you know, especially if they don’t want to. It’s their choice.”

SCROLL DOWN TO SEE THE LATEST NEWS

This story will automatically refresh every 60 seconds
(all times AEDT)

Nick Kyrgios was in outstanding form on all fronts in his Australian Open first round win. Trick shots, sledges and a cheeky crowd celebration at the end.

And the entire match was vintage Nick from start to finish.

7:15am GOOD MORNING
It’s day 3 and there’s so much to talk about. First up. Kyrgios and the Djoker bromance.

Djokovic may be public enemy number one to many in Melbourne but he has found an unlikely ally in Kyrgios — and now the Australian wants them to play doubles.

The combustible Kyrgios once famously labelled the men’s world number one “a tool” but he surprisingly raced to Djokovic’s defence over the past week as the unvaccinated Serbian fought against deportation from Australia.

Djokovic failed and is now back home, but the 26-year-old Kyrgios hopes they can develop their newfound fondness for one another somewhere down the line.

Kyrgios has even won fans in Serbia because of his support for Djokovic — Serbian player Dusan Lajovic jokingly called him “Nick the Serb” on Monday.

“Obviously me and Novak have had some, I guess, differences in the past,” Kyrgios said after victory in the first round on Tuesday at the Australian Open.

“But, I mean, whether it was Novak or someone else, I would have done the same thing.

“I didn’t do it because he was Serbian. If it was another player in that scenario, I would have stood up for what I think was right.”