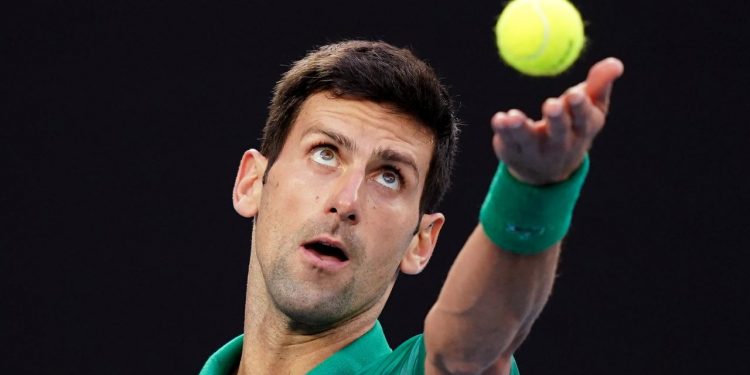 There has been no decision made on Novak Djokovic’s visa status as the Australian Open draw was postponed by more than an hour. The PM is set to answer questions about the Serb. WATCH LIVE.

There has been no decision made on Novak Djokovic’s visa status as the Australian Open draw looms.

Sources told the Herald Sun that the Immigration Minister remains yet to make a call on whether to cancel the Serbian’s entry visa, reserving the right to still do so in coming days.

The Australian Open is set to begin on Monday, with Djokovic to be included in the draw which will be announced on Thursday afternoon.

The draw was delayed by more than an hour

Organisers anxiously await the decision of Hawke regarding the visa status of Djokovic who on Rod Laver Arena today.

Should he play, Djokovic enters the draw as the top seed in the men’s while Australia’s Ash Barty is no 1 on the women’s side.

This story will automatically refresh every 60 seconds

Ash Barty will meet a qualifier in the opening round of the Australian Open.

Craig Tiley is in the room and the draw for the 2022 Aus Open is about to start. Djokovic remains included.

The Australian Open draw will now take place at 4:15 AEDT.

It’s a delay of more than an hour to the original time. We will bring the draw live here as well as the ScoMo press conference.

Unconfirmed if the cancellation of the draw and the PM speaking is related but we will be live streaming the address in the video player above. We await further news and we will update as soon as information comes to hand.

As you all enjoy the elevator jazz music being pumped out as we await the draw, sadly news is it has been delayed at Melbourne Park with no time frame on when it will be staged.

Officials are on standby where the draw was due to start at 3pm.

Those on site have been advised that the draw has been delayed and that a further update will be provided in due course.

Even if Djokovic does contest the Open – where he will look to claim an unprecedented 10th title and 21st slam – there will be questions over his preparations and fitness after spending four nights in a detention facility after a gruelling 12 hours interrogation at Melbourne airport.

His former coach, Boris Becker, said that the 34-year-old was “shell-shocked” by having to spend five days in immigration detention — far from ideal build-up for the first Grand Slam of the year.

“Obviously his preparation is beyond bad. I don’t think he’s ever been in a worse position entering the week before a Grand Slam, but that’s just the way it is,” Becker told the BBC after speaking to the Serbian star on Monday.

2:35pm WHAT IF DJOKOVIC IS KICKED OUT?

Should Djokovic withdraw from the tournament – by his own wishes or otherwise – after the draw is complete, the No. 5 seed would take his opponent.

In this case, that is Andrey Rublev.

Rublev’s opponent would then fall to the No. 17 seed, Gael Monfils.

But as the tournament grows closer, that could yet change again.

Should he withdraw or be withdrawn after the first day of play is announced – which is set to occur this weekend – he would be replaced in the draw by a lucky loser.

In years gone by the two defending champions or a representative from both the men’s and women’s draws would be at the event. This year it will not be so.

Unconfirmed, but we are expecting Craig Tiley and other Tennis Australia personnel.