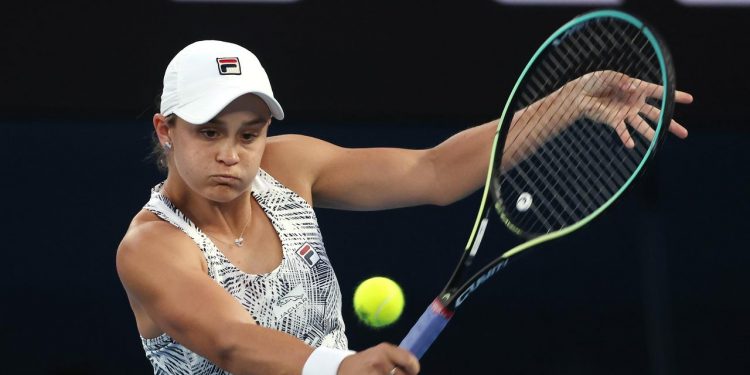 Ash Barty has been described as “better than Roger Federer” after a demolition job that sealed a rare piece of Aussie Open history.

Ash Barty is through to the semi-finals of the Australian Open for the second time in her career after a thumping win over American Jessica Pegula on Tuesday night.

The world No. 1 was red-hot as she set-up a final-four showdown with American slugger Madison Keys.

There was earlier some immense drama on Day 9 at Melbourne Park with Spanish superstar Rafael Nadal forced into a fifth set against Denis Shapovalov and the doubles pairing of Nick Kyrgios and Thanasi Kokkinakis winning through to the semi-finals in front of a riotous crowd.

Ash Barty has bulldozed her way into the semi-finals with a 6-2 6-0 win over American Jessica Pegula.

The world No. 1 was clean without really needing to dig into her bag of tricks as she raced through to her second semi-final at Melbourne Park.

The feat is something no Australian has ever achieved previously with even Aussie tennis icons Lleyton Hewitt and Pat Rafter only making one semi-final appearance each.

Barty is the first Aussie to play two semi-finals at her home grand slam since the tournament was moved from Kooyong in 1988.

Earlier on Tuesday it was confirmed Barty will remain the world No. 1 regardless of her final result at the Aussie Open with all her major rivals falling over at Melbourne Park.

Courier singled out Barty’s backhand slice which repeatedly forced Pegula to play uncomfortable shots from well behind the baseline.

“Roger Federer if you’re back in Switzerland listening, that’s right, I said it bud let’s call it a draw!”

Nick Kyrgios and Thanasi Kokkinakis are through to the semi-finals in the men’s doubles draw after they stirred up a crowd atmosphere never seen before at the Australian Open.

Their doubles battle against No. 6 seeded pair Tim Puetz, from Germany, and Michael Venus, from New Zealand went berserk when the Aussie duo took the opening set and it was completely off the rails by the time they wrapped up a 7-5 3-6 6-3 after more than two hours.

There were a series of dramatic moments in the second set which further whipped the crowd into a frenzy inside Kia Arena.

The drama included Kyrgios being warned for time violations on his serve with a tactic of tossing up the ball several times before entering into his true serve motion.

That prompted an angry outburst from Venus who demanded chair umpire Eva Asderaki do something about it.

A short time later, Kyrgios was also seen complaining to the chair umpire about Venus’ serve — and the time he was taking in between points.

The pair were seen jawing away at each other multiple times in every service game towards the end of the second set.

The heated exchanges only further turned the crowd against Venus — who appeared to delight in the barrage of verbal abuse.

Former Aussie star Sam Groth was stunned watching the game from inside the court.

“This is unprecedented,” Groth said on Channel 9.

“Have you ever seen a tennis match go this way? I haven’t. Kyrgios and Venus are completely at each other right now here in the third set.”

Nine commentator Tom Rehn said: “This place has reached a level even we have not seen or heard before. Not sure I have ever seen anything quite like this”.

However, many other commentators were scathing of the behaviour from the local fans — and Kyrgios’ exuberant reactions.

Veteran Australian journalist Monica Attard posted on Twitter: “The crowd behaviour made it unwatchable. What a disgrace. Do something @TennisAustralia @AustralianOpen”.

Sports media commentator John Dean wrote: “I have never seen a doubles game like this in my life. Insane”.

The crowd was still buzzing when Kyrgios and Kokkinakis were interviewed on the court after the victory.

“I’m not finished, I want to win this f***ing thing!” Kyrgios said to a loud applause.

Kokkinakis directly addressed the crowd’s behaviour and gave his approval of the mayhem.

An Australian Open of upsets have continued as World 51 American Madison Keys thrashed world No. 4 Barbora Krejcikova 6-3 6-2 to book a place in the Australian Open semi-finals.

Keys will play the winner of tonight’s clash between Australian Ash Barty or American Jessica Pegula in the semi-finals.

It’s another massive upset as just Barty and seventh seed Iga Swiatek are left out of the top 10 seeds in the main draw of the tournament as the unseeded stars have played out of their skins.

Alize Cornet and Kaia Kanepi are still alive in the draw and take on 27 seed Danielle Collins and Swiatek respectively to make the other semi-final tomorrow.

Keys won the opening set of her quarter-final clash with reigning French Open champion Krejcikova and opened up an early double break in the second set.

And she romped home to claim the victory and her second Australian Open semi-final.

“You come out and everyone starts crying,” Keys said to Jelena Dokic.

The American, who won the second week of the Adelaide International after Barty’s triumph in the first week, thanked her team and family for standing with her.

“It means a lot,” Keys said. “Last year was really hard and I did everything I could with my team to just reset this off-season and focus on starting fresh and new…and wow that’s gone well so far.”

The Spanish fifth seed edged 14th seed Shapovalov 6-3, 6-4, 4-6, 3-6, 6-3 in 4hr 8min on Rod Laver Arena to advance to his seventh semi-final in Melbourne where he will face either Matteo Berrettini or Gael Monfils.

Kyrgios hits kid with ball, gives him a racquet

Australian tennis star Nick Kyrgios has hit a ball to the ground out of frustration that has bounced back up and hit a boy in the crowd, leaving him in tears.

It was early in the pair’s quarterfinal clash against German Tim Puetz and New Zealander Michael Venus.

Both Kyrgios and his doubles partner Thanasi Kokkinakis appeared concerned, as the crowd all held a breath for a signal the boy was ok.

After the child was consoled by the woman sitting with him, Kyrgios pulled a racquet out of his bag and ran to the other side of the court to have it passed up to the boy.

The boy and the woman has told officials he is fine.

Fans at the Australian Open can wear “Where is Peng Shuai?” shirts as long as they are peaceful, tournament chief Craig Tiley told AFP on Tuesday.

Video emerged on Sunday of security staff ordering spectators to remove shirts and a banner in support of the Chinese player at Melbourne Park. It prompted tennis legend Martina Navratilova to brand the move “pathetic”.

Peng, the former doubles world number one is absent from Melbourne and there are fears for her wellbeing after she alleged online in November that she had been “forced” into sex by a Chinese former vice-premier during a years-long on-and-off relationship.

Tennis Australia, which organises the Australian Open, reiterated its long-standing policy on Monday of “not allowing banners, signs or clothing that are commercial or political”.

But with pressure mounting, Tiley said “Where is Peng Shuai?” T-shirts would be permitted as long as those wearing them were peaceful, adding that security would make case-by-case assessments.

“Yes, as long as they are not coming as a mob to be disruptive but are peaceful,” he told AFP.

“It’s all been a bit lost in translation from some people who are not here and don’t really know the full view.

“The situation in the last couple of days is that some people came with a banner on two large poles and we can’t allow that.

“If you are coming to watch the tennis that’s fine, but we can’t allow anyone to cause a disruption at the end of the day.”

Alcott through to Aus Open final

Alcott was below his best in the first set of Tuesday’s semi-final, with a handful of unforced errors gifting crucial points to his opponent.

But the 31-year-old held his nerve, securing a break and clinching the first set 6-3.

Alcott was unstoppable in the second set, claiming a bagel to cruise into the decider, where he will face Dutch star Sam Schroder on Thursday.

“How good is this crowd?” Alcott, who will retire after this tournament, said after Tuesday’s win. “Everyone was going nuts. I was loving it. It was awesome.

“And I was having a lot more fun today. That was one of my mantras, to make sure I had more fun and I think you could tell I really enjoyed it out here.

“That‘s my second last ever match of tennis.

“I hope everyone comes back. We are just changing the game every day and I love being involved in it.

“I‘m the luckiest guy in the world, regardless if I win on Thursday.”

Spanish superstar Rafael Nadal will take on Canada’s Denis Shapovalov this afternoon on Rod Laver Arena, with the winner set to qualify for the Australian Open semi-finals.

But this will not be the pair’s first encounter on the tennis court, with a photo of Nadal and Shapovalov from 2008 emerging on social media.

Nadal is chasing a record 21st grand slam singles title, and with no Roger Federer or Novak Djokovic in Melbourne Park, he’s a strong chance of doing so.

The 35-year-old and Shapovalov will face off at 2pm local time.

“I’m definitely expecting a long battle out there,” Shapovalov said this week.

“Obviously, he makes you play a lot. His defence is very good. He’s very good at what he does, so I’m going to have to try to play my game, take it to him and keep doing what I have been doing — playing patient, fighting for every point, and just picking my spots to play aggressively.”