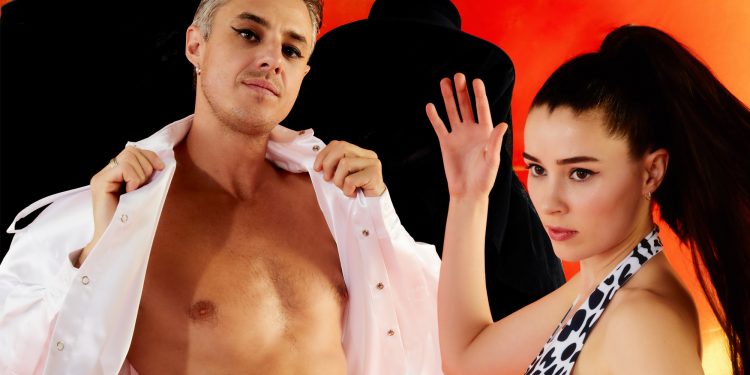 
Confidence Man’s ebullient frontwoman, Janet Planet, has only one mode: full send. Her band have announced a 42-date international tour, an album is about to drop and their streams are shooting up. Post-COVID (mostly), things have escalated quickly.

“Everyone wants to throw down,” says Planet (real name Grace Stephenson). After two years, her adopted hometown of Melbourne has finally emerged from a COVID cocoon and she’s up and about. “My motto is: do it now. It’s also overwhelming because it’s like do everything now.”

Fresh from some costume fittings for Confidence Man’s imminent album tour, Planet is radiating an eager, guys-wait-til-you-see-this-shit glow. Within a single 40-minute Zoom chat, she mentions getting drunk 11 times, doing mushrooms while writing second album ‘Tilt’ and insinuates they’ve had some very big nights with Noel Gallagher (more on him later).

Both McGuffie and Goodchild nicked their stage names straight from tombstones. That’s about as much as we’ll get out of them: Janet and Bones are very much the cavorting, contorting stars of the Confidence Man show. She gives us the scoop on a new get-up: “I came up with a new stage costume idea while I was gardening. I started using the wooden stakes as mini-mechanical shoulders and pulled some jerky moves.”

“The problem is I can only do one song at a time in these new outfits. I have a million ideas like that; like revolving floors,” she says. “Now I have a bit of money you can’t hold me back. It’s dangerous, you don’t want me to have too much money.”

“I feel like the pop music we’re writing has an edge. It’s weird and it’s wonky”

Confidence Man were born out of a sneaking suspicion that members of The Belligerents, Moses Gunn Collective and Jungle Giants could have more fun – and more success – with a joyful, slightly bonkers band consisting of a sexy duo out front and two shadowy characters keeping the beat in the back.

Formed in Brisbane in 2016, they went with the battle plan above and were swiftly signed to UK label Heavenly Recordings on the strength of their demos.

Confidence Man’s career went from zero to turbo very quickly. The quartet had an unlikely breakout moment at the festival Golden Plains in 2017, where McGuffie and Goodchild wore black beekeeper headwear as Bones and Planet threw shapes out front and snake-charmed 10,000 people to crouch low during the breakdown for ‘Boyfriend (Repeat)’.

Planet held the revellers back like William Wallace in Braveheart before leaping in the air and yelping “Get down!” as the band kicked back in. The throng sprung up and just like that, Confidence Man became the talk of the weekend.

Then came the backlash.

In the bad old days before triple j moderated their Facebook page, Confidence Man were tall poppies scythed down after lacklustre footage from Splendour in the Grass went up with the caption: “Is this Australia’s best up-and-coming live band?”

The answer was an emphatic no. “If this is the best… then we as a nation are fucked”, read the most popular comment.

But Confidence Man licked their wounds and got on with the job, putting out ‘Confident Music For Confident People’ in 2018 with piss-taking dance-pop cuts ‘Don’t You Know I’m In The Band’ and ‘Better Sit Down Boy’.

Sneering keyboard warriors couldn’t stop the tour dates from rolling in. European shows led to an eventful night in Primavera Sound in Barcelona where they turned up as nobodies and won over a 2AM crowd of 15,000 frothing Spaniards.

They dropped stopgap single ‘Does It Make You Feel Good’ in 2019 and hit the road again – then the coronavirus stopped everything.

It was a good thing, we’re a little surprised to hear Planet say.

“We had been touring non-stop. The label was like, ‘Where’s the album?’ We didn’t have any time. I realised I’d been playing these songs for almost six years,” she says. “I wanted to bring in new costumes and do new songs. I’d been stockpiling ideas.”

So they all moved into a house together in the Victorian suburb of Thornbury with a single goal: write the album.

It was a wild time, Planet remembers: “We were all on JobKeeper; every day was 9-5 jamming… then at night we were getting drunk and jamming. It saved us, we had something to aspire to.

“Without that we would’ve gone crazy. The other thing that saved us was DJ sets here and there,” she adds, laughing.

“[Noel Gallagher] sent through the other day ‘You guys are supporting me on all my shows! Can’t wait to hang out!’ I’m like, oh no – I’m going to get so wasted and embarrass myself”

Out April 1, ‘TILT’ leans into the resurgence of high-energy ’90s rave – a sound currently resonating with everyone who feels a rager is well overdue.

“I feel like the pop music we’re writing has an edge. It’s weird and it’s wonky. It’s pop on a tilt,” Planet says, dropping the album title with a straight face. “The motto of the record is partnering this soft, feminine energy with also this hot, feminine energy.”

‘Angry Girl’ is an example of the latter, Planet snapping “All I see is red, off the chain, off the meds.” She blends the two on ‘Break It Bought It’: “Keep your hands to yourself because if you break it, you bought it.”

Confidence Man will bring the bangers on their Australian album tour in August, supported by Korean-Aussie rap crew and fellow hard-partiers 1300. But before that they’ll play Glastonbury Festival in the UK for the second time. “Fingers crossed Noel [Gallagher] introduces us on stage,” she says. But even if he doesn’t, he’s having them as special guests when he headlines Margate Summer Series earlier in June.

“Noel still messages me all the time,” Planet says gleefully. “He sent through the other day ‘You guys are supporting me on all my shows! Can’t wait to hang out!’ I’m like, oh no – I’m going to get so wasted and embarrass myself. He still goes hard.”

While on the subject of rock star friends, NME asks Planet to confirm the rumour Confidence Man have a recording of The Edge of U2 playing tambourine they plan to use. She does us one better.

“Noel and The Edge are actually both hidden on the record somewhere,” she says, then clams up. “I’m not supposed to talk about it. You’ll have to do some research on the YouTube comments.”

300,000 Glasto punters await at Worthy Farm – but Planet is already thinking about the next thing for Confidence Man. “Part of our charm is that we are exactly what we are. We still have proper pop aspirations of making a whole pop album; I reckon we’d get away with it and still look cool,” she muses.

“I reckon we’re gonna sell out pretty soon. We were born to sell out, to be honest.”

Confidence Man’s ‘TILT’ is out April 1 through I OH YOU/Heavenly/PIAS. They tour the UK in May – with a stop at Glastonbury – and Australia in August