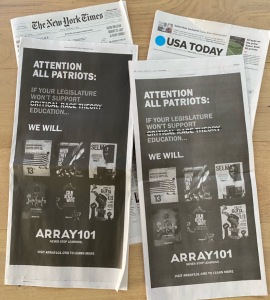 Long a social justice thorn in the league’s paw, the ex-San Francisco 49ers quarterback isn’t taking the field at SoFi Stadium as the L.A. Rams take on the Cincinnati Bengals on February 13. However, a fictionalized version of the activist will be featured in the official program for Super Bowl LVI, I’ve learned.

Specifically, Jaden Michael as a teenage Kap is featured in an ad from Ava DuVernay’s ARRAY for the learning companion to the Netflix series Colin in Black & White, which launched back on October 29, 2021 on the streamer. 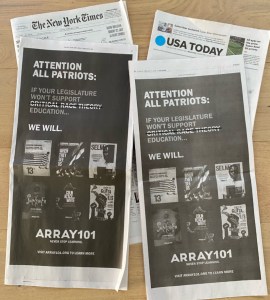 Coming after Kaepernick being essentially blacklisted by the NFL for his taking a knee stance in protest against racism and police violence back in 2016, the placement of the ARRAY 101 ad in the 288-page Super Bowl program is a high-profile win and opportunity for both Colin in Black & White creators DuVernay and the Super Bowl XLVII player. Using the six-episode coming of age and cultural commentary limited series as a launch pad, the Colin in Black & White learning companion debuted online yesterday. Giving notice, DuVernay’s media collective had full-page ads in the likes of USA Today and the New York Times this week spotlighting the Colin in Black &White learning companion and other such guides for other projects.

DuVernay explained the purpose of the ads and the learning companions to Deadline:

I believe that knowledge is a necessary tool in building a just society.

The idea that vital parts of American history education are being erased from official curriculum, that vital works of literature are being banned, that vital discourse is being muted is something I can’t sit quietly by and watch happen. We can all take action in our own ways. At ARRAY, senior leadership engaged in brainstorms across our pillars regarding the CRT hysteria and how we could contribute to a just outcome.

This project is a collaboration between the Education and Marketing Pillars of our non-profit ARRAY Alliance. To be honest, we didn’t think our ad for the Colin in Black & White learning companion would be approved by the NFL as that outfit has proven to be an organization steeped in bias and bluster. Our marketing team, led by CMO Jeff Tobler, worked to create an ad that could slip through the cracks without calling attention to our intention.

This weekend, the ad promoting our educational guide, exploring race and resistance of bias systems like the NFL, will be in the hands of thousands of Super Bowl attendees and anyone receiving the official souvenir program.

If one person visits the guide and learns something more than they knew before, it’s worth it. Because one person can make a difference right where they are. ARRAY 101 is led by ARRAY’s President Tilane Jones and Vice President of Education and Understanding Tammy Garnes. We create robust and resistance-minded educational resources as companion projects to ARRAY film and television titles. The mission is to encourage disruptive understanding and action within communities, to challenge the same old way and the same old systems. We began this work with When You See Us in 2020, and followed with a learning guide in association with Yale for Selma. Two new companions are available now for the first quarter of 2022 – Sankofa and Colin in Black & White. We feel these learning guides are well-timed to contribute to the national conversation around race and education that has been hijacked and politicized. The NFL program and full page ads in two of the country’s top newspapers was our strategy to informing people who may not have access to this information, or feel that they don’t have a voice in the matter. We want everyone to know that ARRAY Alliance creates these learning companions to be completely free and available for all kinds, colors and cultures of people who want to keep learning.

Certainly for a league that has suppressed its players from speaking out individually, repeatedly been accused of racism, and is currently fighting a lawsuit by former Miami Dolphins coach Brian Flores, the ARRAY 101 ad comes as the NFL seeks again to repair its tarnished image. The NFL did not response to request for comment on the ARRAY ad when contacted by Deadline.

As noted by DuVernay, when invited by the NFL late last year to take out an ad in the glossy official Super Bowl program, ARRAY doubted that they would make the cut. In point of fact, the learning companion ad not only got a slot on page 65 of the 2022 Super Bowl program, but was featured in the program for the February 6 Pro Bowl in Las Vegas.

Always a favorite perch of corporate America, this year’s glossy Super Bowl program includes ads from the likes of Disney-owned Hulu and ESPN, WarnerMedia’s HBO Max and CNN, ViacomCBS’ Showtime. Of course, with NBC broadcasting the Super Bowl as well as the Winter Olympics this year, the Comcast-owned network is well represented in the official program too, along with ads for corporate cousins USA Network and streamer Peacock.

Learn more about ARRAY’s learning companion initiative in the video below: