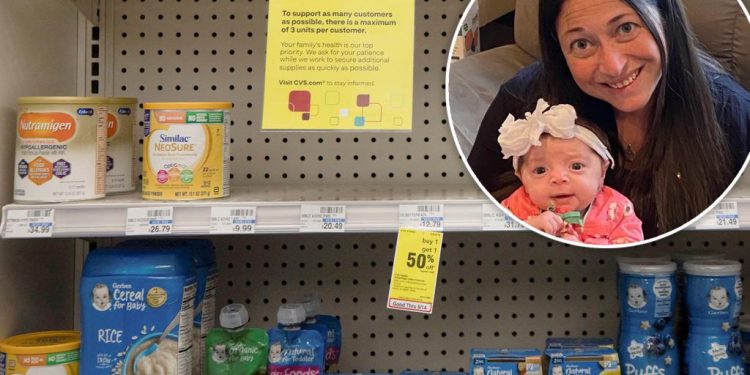 
A baby formula shortage has turned into a nationwide food crisis for parents across the country desperate to feed their infants. Retail outlets have seen a 30% drop in the availability of some popular brands, due to supply chain issues, labor shortages, inflation and safety concerns.

In February, Abbott Nutrition recalled formula made in its Michigan plant and shut down its facilities after two infants died and several others were hospitalized after consuming its product. The FDA has not cleared the factory to reopen, and it’s unclear when production will be able to resume.

Meanwhile, the feeding frenzy has some New Yorkers searching as far as Wisconsin to get formula for their little ones.

The Post spoke with several local moms about what they’re dealing with and how they’re getting by.

Unable to breastfeed, the New Jersey teacher started her 3-month-old, Rachel, on powdered formula because it was relatively affordable and easy to find. For months, she’s been feeding Enfamil NeuroPro Baby Formula, and she initially paid $9 per bottle or $50 for six on Amazon. Today, she’s paying $11 per bottle — if she’s lucky.

“There was a time when I was down to one bottle left – I couldn’t find it anywhere. Luckily my mom had gone to Acme and they had just gotten a shipment in – they let her get three cans,” Pines said. “They’ll limit you … There’s signs up that say you can only get three bottles of formula.”

She attempted to switch to an organic formula called Bobbie, but got put on a waitlist.

“It’s insane,” she said. “We’re screwed if the shortage keeps going on and we can’t get any.”

The speech pathologist’s 5-month-old, Brennan, was born with a kidney condition that required a special formula, Similac PM 60/40, at a cost of $24 per can. After it was recalled in February, doctors advised she switch to Gerber Good Start Gentle, which costs about $22 for a two-day supply and has similar ingredients. But it’s been in very short supply.

“It’s been hard to find so I’ve had to make the switch to Gerber Good Start Gentle Pro, which comes in a much larger container, but the ingredients are completely different than the Gentle version,” Bachmann lamented. “I also considered getting European formula because they’re more similar to the Similac PM 60/40 but I didn’t wanna have to worry about shipping.”

The general manager for a country club outside of Syracuse has had family members as far as Wisconsin searching for an alternative to Similac Pro Advance to feed her 6-month-old, Emmerson. She recently switched to a similar off-brand called Tugaboo Infant Formula, but worries about how it will impact her young daughter.

“We don’t want to disrupt her eating habits, she’s only 6 months old, we really can’t switch her so abruptly,” Franz said, adding that she searched retailers like Amazon, BJs and Wegmans for the Similac.

“We couldn’t find it anywhere,” she said. “We now have at least nine containers of the off-brand version. We don’t want to hoard it because other people need formula, but we don’t know when it’s going to end. This is all she eats.”

After weeks of searching, Milan thought she’d hit the jackpot when she found a few available cases of Enfamil Neuropro: Sensitive for sale online. Her 11-month-old son Fa’iz has a slight lactose sensitivity and requires the special formulation.

She paid over $200 for the sought-after baby food, only to later get a refund when the online outlet realized it didn’t have the stock to fulfill her order.

“I’m stressing out because I can’t get him his formula anywhere,” said the desperate mother, nothing the shelves at her local Target and CVS are empty. Her pediatrician has even run out of the samples they had in the office.

So, Milan and her fiancé, who she chose not to name for privacy reasons, have resorted to making their own plant-based baby formula based on a popular YouTube recipe. The homemade fare is a finely-blended mix of spring water, shelled hemp hearts, agave, Irish Moss, a dash of natural sea salt and a few droplets or non-GMO grape-seed oil.

Milan said: “As a mom, you always want to be able to give your baby everything he needs.”

Hunting down cases of Similac Ready-to-Feed formula for 4-month-old son Dylan has become a nearly impossible task for the Manhattanite.

“When I go to the Target on 61st Street, the shelves are pretty much empty,” Zoia, who chose not to provide a last name for privacy reasons, told the Post.

She’s recently had some success in scoring a couple packs of two-ounce to-go bottles on Target.com for around $12 a case, but the retail giant has placed heavy restrictions on the amount of formula that parents are able to purchase each week.

“We can’t buy in bulk,” said the mother of two, who’s on maternity leave from a job in public relations. “So I have to try to remember to purchase four boxes of the little bottles every week.”

She concerned that things are only going to get worse. “I’m worried that people are going to start stocking up, which would make formula even harder to get,” she said. “And we still have eight more months of this to go through [before Dylan’s weened off of formula].”

Monster Quake on Mars Is The Biggest Ever Recorded on Another Planet, NASA Says – ScienceAlert