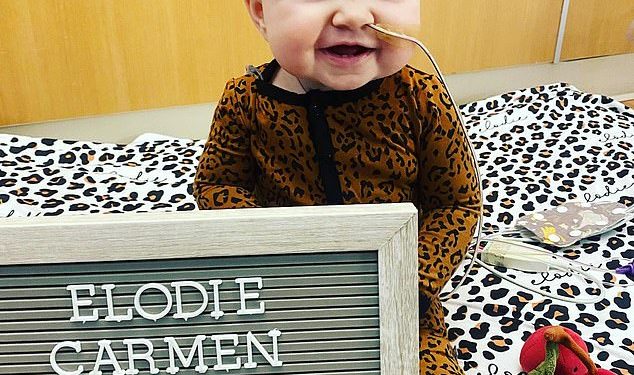 
A young girl who waited over 200 days for a new heart after being diagnosed with a rare, deadly, heart condition, has finally received the life-saving transplant.

Elodie Baker, who is still under a year old, received the transplant on March 27 after a long 100 day stay in a Chicago hospital.

In August, she was diagnosed with dilated cardiomyopathy, a condition that is hard for doctors to detect but often deadly.

Doctors nearly missed her condition when her mother brought her in for a checkup, but now with the transplant she is expected to live a healthy life going forward. 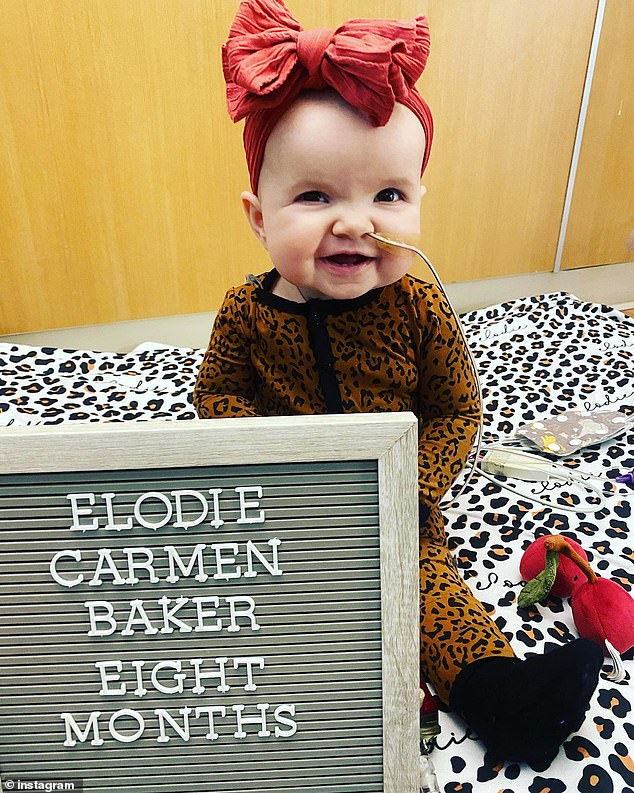 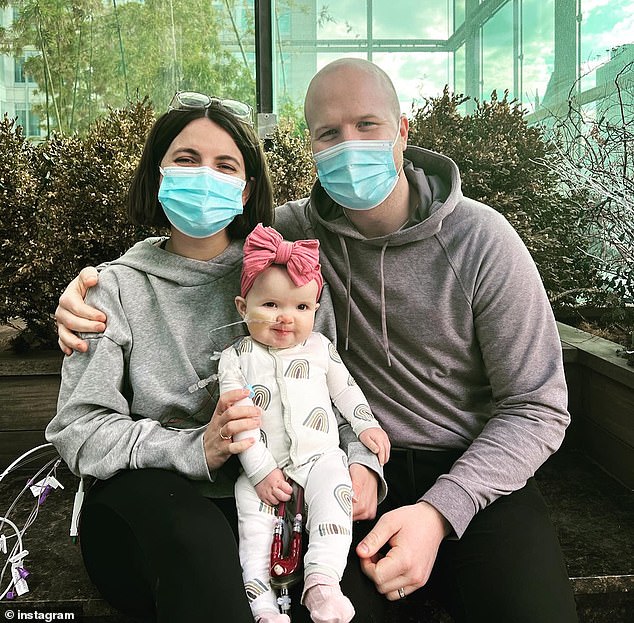 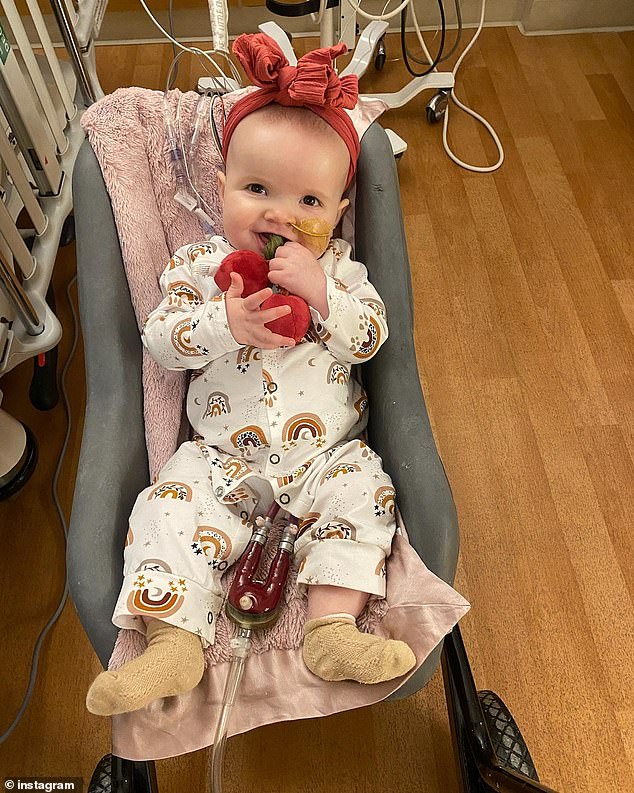 Doctors initially could not figure out what was wrong with Baker (pictured), but an x-ray revealed that she was suffering from a rare but deadly heart condition

‘Our pregnancy was normal and we had an uncomplicated delivery and actually went home with Elodie,’ Katie, Elodie’s mother, told Good Morning America during an interview this week.

Baker knew something was wrong with her daughter when she had trouble feeding, and would start crying while her mother nursed her.

‘She was with us in Minnesota at home for seven weeks and one night, she wouldn’t feed. I was nursing and she let out this cry and my heart just sank and I said to [my husband] Collin, ‘Something’s wrong. We need to take her in,” she explained.

Doctors originally told Baker that they were not sure what was wrong with her daughter, as nothing stood out to them.

Just before the Baker’s went back home, doctors recommended ax x-ray, which ended up being a life saving decision.

‘I think they were considering maybe sending us home but they said, ‘Let’s just get an x-ray to be sure,” Baker said.

‘Then the x-ray came back. They saw her heart was enlarged and that was on August 21. And we haven’t been home since.’ 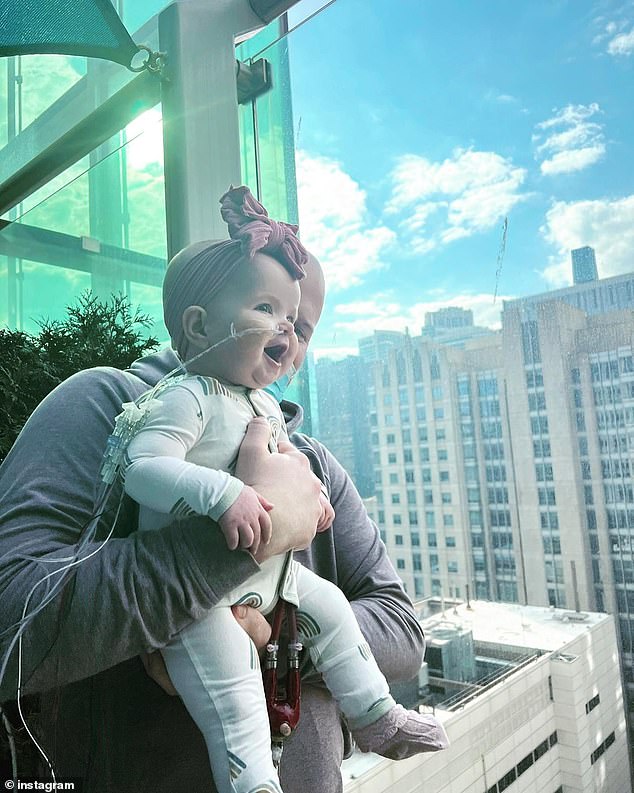 After her diagnosis, Elodie Baker (pictured) was moved from Minnesota to Chicago for treatment. She used a breathing and feeding tube and a device to help her heart pump blood 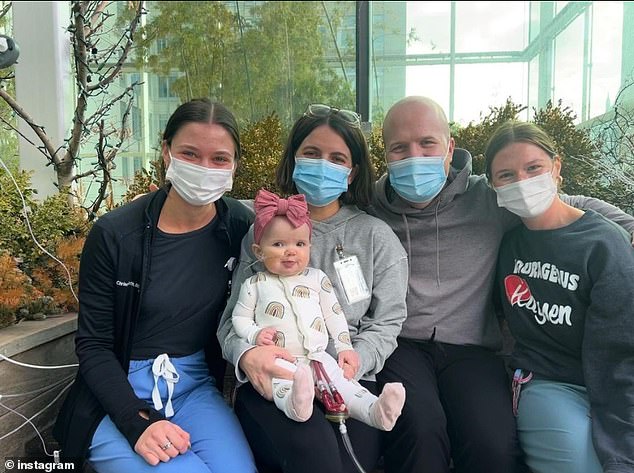 On March 27, Elodie (center) successfully received a heart transplant, over 200 days from her diagnosis and after 100 days in the hospital 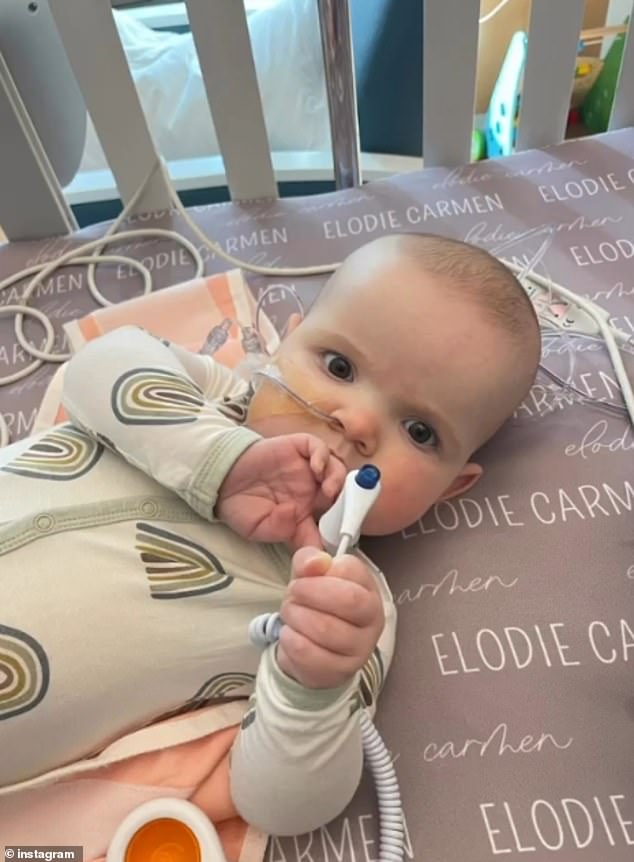 Baker (pictured) is now doing fine, and undergoing therapy to catch up to her peers on developmental milestones

Doctors who worked on Elodie’s case had trouble determining the cause of the condition, which occurs when a person’s heart chamber becomes enlarged and struggles to pump blood.

Baker would eventually be transferred from her home in Minnesota to a hospital in Chicago, Illinois, where she would receive care.

‘In Elodie’s case, the genetic test did not reveal an answer for why she developed this kind of cardiomyopathy and in that situation, it’s called idiopathic dilated cardiomyopathy, meaning at this point in time, we don’t really know why this happened to her,’ Dr Anna Joong, who has cared for Elodie for months at Lurie Children’s in Chicago, told GMA.

Doctors quickly determined that she would need a heart transplant, which can be a challenge for a young child since the typical adult organs that become available can not properly fit in their chest.

During the wait, doctors implanted a pediatric ventricular assist device (VAD) into Elodie to serve as an artificial heart in the meanwhile.

The infant also required a feeding tube to eat and breathing tube, as those remained a challenge for her as she received treatment. 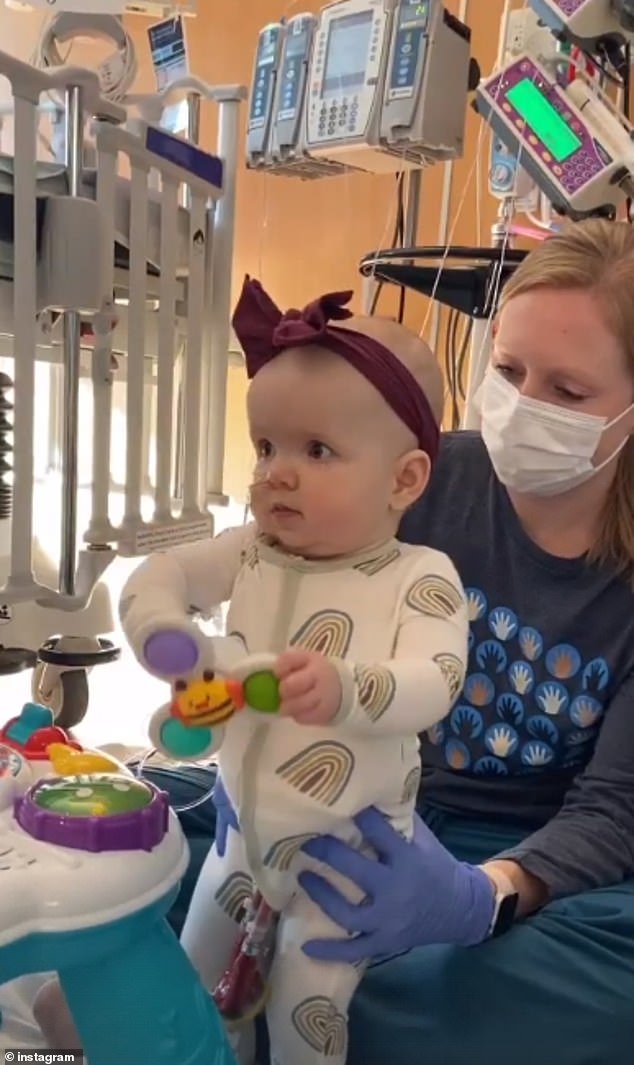 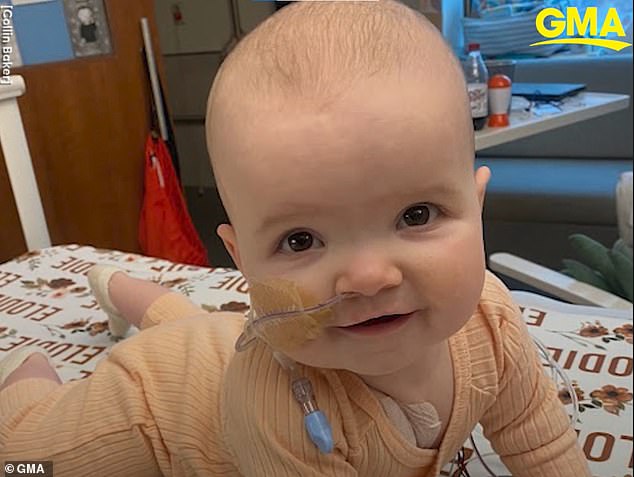 ‘Her heart was so sick, that the IV medicines just weren’t enough and she needed a VAD,’ Joong said.

‘We use this device as a way to bridge her to transplant so it’s a way to support her heart, to help get her stronger in the time that she’s waiting for her donor heart.’

A heart did eventually become available, though, and the operation was successfully completed last month.

While she is still on a feeding tube for the time being, doctors told GMA, but she has had a breathing tube removed and has gone through physical and speech therapy to help her catch up to developmental goals for her age.

‘She has already been transferred out of ICU level care and is sitting up,’ Joong explained.

‘She is one strong kid and we are so grateful to the donor family.’

In 2010, researchers found that the condition makes up around 403,000 global deaths every year, and that the figure is trending upwards.

What is dilated cardiomyopathy?

Dilated cardiomyopathy is a heart condition that occurs when a person’s left ventricle, the main chamber where the heart pumps blood, becomes stretched and can no longer pump blood

It often does not cause any obvious symptoms, and can be hard for doctors to detect on regular diagnostic tests

The condition can be deadly, though, and often is. In some cases, doctors may not be aware that a person is suffering from dilated cardiomyopathy until after they die from it

There are genetic risk factors for the condition

People who suffer from obesity, diabetes, high blood pressure, or heart rhythm problems are at an increased risk of suffering from dilated cardiomyopathy

It is responsible for around 10,000 U.S. deaths every year

The tools to stop climate change are in our hands. Here’s how to use them