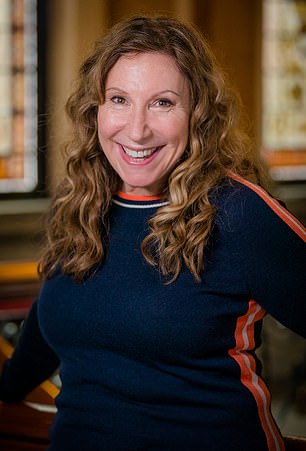 Screenwriter Kay Mellor OBE believes NHS frontline workers should be given a ‘big fat pay rise’ when the pandemic is over – and says she is willing to pay higher taxes to help fund it.

Mellor is the writer of hit TV series Band Of Gold, Fat Friends and The Syndicate.

The hotly anticipated fourth series of The Syndicate starts on BBC One on Tuesday at 9pm.

What did your parents teach you about money?

That I can get by on very little, so I don’t need much.

My parents got divorced when I was three.

It was an acrimonious break-up and I didn’t see my dad, who was an antiques dealer, for years. He only came back into my life when I was 21.

My brother and I grew up in a council house with Mum. She worked hard for her money. She was a single parent until I was about 11, very proud and refused to go on benefits. She worked as a tailoress at Burton’s.

Once a year, we might get new clothes, but we didn’t get pocket money, go on holiday, have a car or do things other families did. We didn’t have a TV. We played out and I think that helped me develop my imagination.

How did growing up with little money affect you?

I think I’ve turned it into an advantage. It means I’ve never been frightened of not having money. Particularly after Band Of Gold hit the screens, I had a lot of people knocking on my door offering me good money to work on this and that.

I would never compromise myself for money in my career because I learned as a child what was more important than money.

My mother wasn’t there a lot when I was growing up. She was working, but when she was there she was a really affectionate, loving mother and I never had the feeling I’d gone short in any way.

Sadly, my mother has now passed away. She was an amazing woman and the joy for me when I did start to earn good money was that I could spend some of it on her.

Have you ever struggled to make ends meet?

Yes, in the late 1970s when I was in my 20s. My husband and I were living in a council flat with our two little children and we scrimped and saved to buy a tiny terrace house for £3,000.

We could afford the mortgage but the first month the rates bill came in – the then equivalent of council tax – it was a surprise and we couldn’t pay it.

It was around that time that my father came back into the picture. I remember crying and being upset because I couldn’t see a way out. I thought we were going to lose the house. It was a bill for something like £37.

But my father gave me £50 and said: ‘Keep the change, go out for a meal and I’ll look after the kids.’

And so my father, who had been remiss and not been a part of my life, suddenly came good.

Have you ever been paid silly money?

Yes. In the 1980s, I was working as an actress and I got a part in a TV commercial for a DFS furniture sale.

All I had to do was walk forward, singing: ‘We Are Sailing’ by Rod Stewart and run my hands over the furniture.

What was the best year of your financial life?

It was 1997, the year I had A Passionate Woman on in the West End and Band Of Gold on the TV. I earned a lot of money that year. I wouldn’t know exactly how much but it would be getting on for six figures. I know I paid a lot of tax.

How did it feel earning that kind of money?

I found it difficult to believe. It took me a long time to value what I’d got – a talent that people would pay good money for. When I started working in TV, I thought I was a millionaire when I was earning just £230 a week.

What is your biggest money mistake?

Taking the advice of my accountant and investing in property that they were purchasing in some sort of investment scheme in 2000. I lost about £30,000.

Do you save in a pension and invest in shares?

I’ve been saving into a pension since the 1980s. Knowing that it wouldn’t matter if I didn’t ever want to work again is liberating. It gives me such freedom.

I get advice from a financial adviser about my investments. I wouldn’t know how to play the stock market myself. I would probably lose everything.

Do you own any property?

Yes. My home in Leeds is an old mill house built in the 1830s from Yorkshire stone.

I used to walk past it and say to my husband: ‘Can you imagine one day being able to afford a house like that?’

Then, one day, it was advertised in an estate agent’s window. By then I was working at Granada TV and I had a bit of money. So we bought it 20 years ago and did it up bit by bit. It’s probably worth over a million pounds now.

What little luxury do you treat yourself to?

I love a full body massage. I have a masseur who would come to the house. I’ve had to give it up during lockdown and I’m missing it. It would only cost £50.

If you were Chancellor what would you do?

I’d pay nurses more, as well as all the other frontline NHS workers who have kept us safe. I would make sure they all had a big fat pay rise after Covid and I’d tax higher earners such as myself more to pay for it.

What is your number one financial priority?

To ensure that neither myself or my family and friends have got insurmountable debts.

Freddie Mercury: Heartbreaking reason he kept illness secret 'He was hoping for a cure' | Music | Entertainment

‘We shouldn’t be complacent’: Suicide deaths fell during the 2020 pandemic — but what caused the decline?

Ringing the changes: BT faces its biggest shake-up for a generation

Freddie Mercury: Heartbreaking reason he kept illness secret 'He was hoping for a cure' | Music | Entertainment

Remember the couple who got the house in California but couldn’t move in because the seller refused to move out?