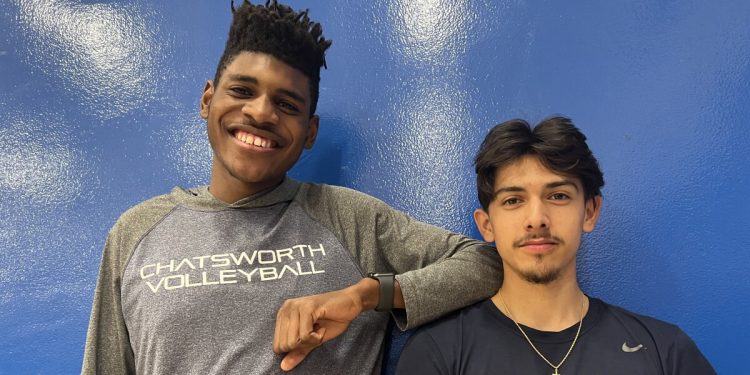 
Every moment on the volleyball court, 6-foot-7 senior Jamaal Unuakhalu savors it like smelling the interior of a new car. You sense his excitement as he leaps above the net to complete a kill. You hear his determination as he roars following a block. You see his optimism smiling on the bench next to a teammate.

Every game and every practice is precious to Unuakhalu because he missed the entire 2020-21 high school sports season under orders from his parents not to play because of COVID-19 concerns.

That was the school year Chatsworth won City titles in basketball and volleyball, the two sports Unuakhalu plays. He never saw the teams play.

He said his mother decided it was too dangerous to play sports with COVID-19 rates of infection too high. He took online classes. He rarely left his house other than to stay in shape by working out on his own at a park in case he got permission to return. It never happened, but he began lobbying to be allowed back for his senior season.

“I started saying it’s going to be my last year and what I missed out on,” he said. “I didn’t want to do it again.”

By the start of school in August, it was decided he could play. But then came word that to play, he needed to be vaccinated. It wasn’t until November that final permission was given to receive his shots.

”I said thank you multiple times,” he said.

Unuakhalu earned All-City honors in basketball, teaming with another All-City player, Tim Lopez. They averaged 18.7 points and 17.8 points, respectively. Unuakhalu was a club volleyball player and convinced Lopez to try the sport. Now the two are on the No. 1 volleyball team in the City Section and the favorite to win the Open Division championship.

Volleyball coach Sina Aghassy said he believes Unuakhalu is capable of playing basketball and volleyball at the collee level, but missing out on his junior season will likely see him heading off to junior college next season.

“When you have experiences and years taken away from you, you develop appreciation and gratitude every moment you get on the court, and it’s allowing him to maximize his potential playing a sport he loves,” Aghassy said.

Unuakhalu isn’t quiet when he makes a play.

“In terms of vocal energy, when he scores points, it’s infectious,” Aghassy said.

Lopez said he “could not do” what Unuakhalu did, skip an entire year of playing sports.

Asked if he ever thought of secretly playing sports, Unuakhalu said, “I could have done that, but I’ve learned when you listen to your parents, they give you more leniency.”

So enjoy every moment you see Unuakhalu playing sports, because he is making up for lost time.

Asked what he enjoys more, a dunk in basketball or a kill in volleyball, Unuakhalu said, “Definitely a dunk because it’s not that often.”

Chris Rock avoids talk of Oscars slap at show in Indio, says not until I get paid – Desert Sun