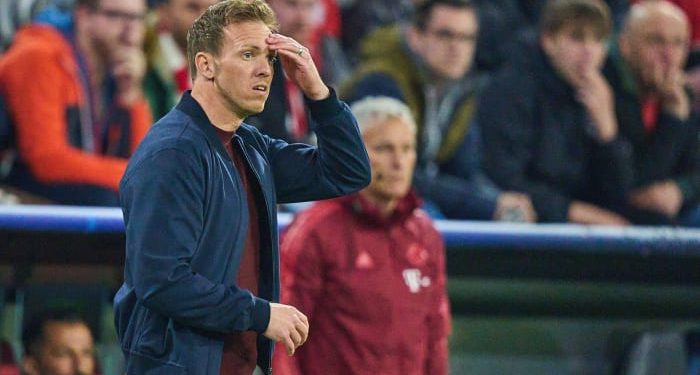 
The problem for Bayern Munich is that it is so dominant in the Bundesliga that domestic success doesn’t really matter anymore. This season it will win its 10th successive league title. It’s not even especially close: Bayern is nine points clear with five games of the season remaining. That means Bayern will have won 31 of the 59 Bundesliga titles to have been contested. The second most successful team has won five. The Bundesliga has effectively become monopolized.

And that means its season comes down to the Champions League knockout stage. That is the only place where it meets a challenge, but what makes it difficult is that this is not a team used to being challenged. How does it deal with an opponent it cannot just overwhelm, particularly in the pressure of a knockout tie? And how does it deal with the fallout of quarterfinal disappointment in the form of a 2–1 aggregate defeat to Villarreal, the seventh-placed team in La Liga?

Last season, having breezed by Lazio in the round of 16, it came unstuck at home against PSG in the quarterfinals, its high line struggling to contain Kylian Mbappé as it lost 3–2 in the first leg. A 1–0 win in Paris wasn’t enough to avert an away-goals defeat. The high line, frankly, remains a problem. Hansi Flick, who had led Bayern to the Champions League the season before, left at the end of last season to take over as Germany’s national team manager and was replaced by Julian Nagelsmann.

Nagelsmann is 34, but this is already his sixth season as a coach. Many see him as the wunderkind of German coaching. The suggestion is that he was Ralf Rangnick’s preference to succeed him as Manchester United manager for next season. He has achieved remarkable success with Hoffenheim and RB Leipzig. But the doubt about him—a minor one given his relative lack of experience—has been a tendency for blowups in major games in Europe. Perhaps his Hoffenheim being hammered by Liverpool in the Champions League qualifying playoffs in 2017–18 was to be expected, but there was a clear sense of anti-climax both about RB Leipzig’s 3–0 defeat to PSG in ’20 and the 4–0 aggregate defeat to Liverpool in ’21.

“To be honest, this is one of the worst three defeats of my career,” Nagelsmann said after Tuesday’s defeat. “Hoffenheim vs. Liverpool was tough. RB Leipzig vs. PSG was difficult to take. We had plenty of chances. This is certainly one of the three toughest occasions.”

It’s a small sample size and managing Bayern is different from managing Hoffenheim or Leipzig. But the initial evidence is not encouraging. Bayern won all six of its group matches, which, given it had to play quarterfinalist Benfica and (an admittedly unstable) Barcelona, should not be taken for granted. But there were warning signs in the away draw to RB Salzburg in the round of 16, which the Austrian side secured with an injury-time equalizer. As Bayern played a back three, Salzburg, again and again, got in behind the wingbacks. Even in Munich, where Bayern convincingly won 7–1 to advance, Salzburg had two very good chances early on from finding space on the flank.

Bayern may feel it had the chances in the second leg against Villarreal to have won the tie, but the fact is that in the first leg Villarreal probably should have won by more than 1–0. Although Bayern played a back four in the first leg, again it was the areas behind the fullbacks that were the problem.

Increasingly it’s becoming apparent that when teams press high, particularly given the nature of the modern fullback, the most profitable area for opponents to exploit is on the flank. That was clear in the Premier League game between Manchester City and Liverpool on Sunday. But Bayern is largely untested at home and meets that sort of challenge infrequently.

It remains a fine attacking side, and the margins are fine. Perhaps with an early goal it would have blown Villarreal away. Thomas Müller missed an extremely good chance in both legs. But it always looked vulnerable. Villarreal manager Unai Emery, as he does so often, set his team up superbly. It frustrated Bayern and probed its weak spots. Emery’s side, made up it seemed largely of Tottenham rejects or potential transfer targets for the clubs of Bayern’s ilk, deserved its win. Nagelsmann was outcoached.

Perhaps Bayern will reason that he is still young and his side will still win the Bundesliga. It’s likely the club will give him another chance. In part, perhaps, the issue is a slim squad that was short on midfield cover in the first leg when Leon Goretzka was just returning from injury. There is a dependence on Robert Lewandowski, who will be out of contract after next season and has so far refused to sign a new deal, with CEO Oliver Kahn moved to dispute swirling reports that the Polish star will leave. Regardless, the Bayern hierarchy is not habitually patient.

And the fact is that of the four games he has coached by which Bayern managers are truly judged (and that does not include the second-round exit in the DFB Pokal after a 5–0 defeat to Borussia Mönchengladbach), Nagelsmann has won only one. If nothing else, he has plenty of self-awareness when it comes to that.

“If we win [the Bundesliga], we’ve matched what we did last year, which is not enough for Bayern Munich,” Nagelsmann said. “The [Champions League] semifinals should have been our minimum goal, but we’ve not done it.”

PlayStation Plus and Nintendo Switch Online get major pro-consumer update

PlayStation Plus and Nintendo Switch Online get major pro-consumer update