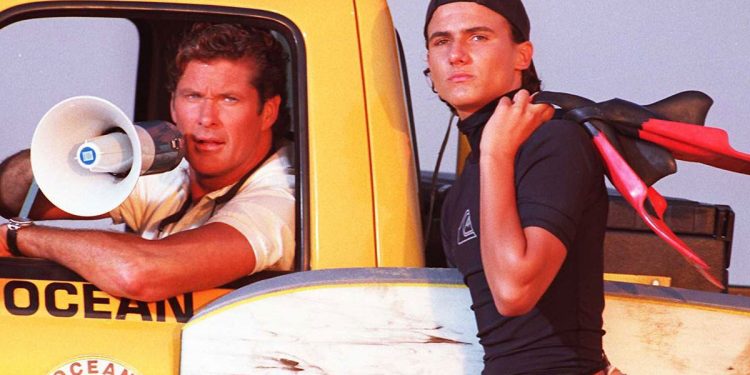 
Jeremy Jackson, 41, is unrecognisable from his days on Baywatch. He now has a thick bushy beard and works as a personal trainer.

Baywatch star Jeremy Jackson has totally transformed from his days as Hobie Buchannon on the show.

The 41-year-old now shows off an impressive and man-scaped beard and wears his hair in a shaven mohawk.

Known for his clean-shaven look and spiky hair, Jeremy was a favourite of many viewers of the hit show.

Jeremy, who now works as a personal trainer, shared a series of photos of him during his time as Hobie, and some of the present day.

The star’s new thick facial hair passes his chin and has been sculpted perfectly around his face – revealing chiselled cheekbones.

He played Hobie Buchannon on the show

“Episode 82. This is Jeremy Jackson. You know him as Hobie Buchannon from Baywatch. From the ‘Bu to the OC to the mean streets of the SFV… there’s much, much more to the story. Welcome to another episode of It’s All Bad.”

Jeremy battled addiction after his time on the show and became hooked on alcohol, sex and drugs.

A few years later he was using crystal meth and when he was 19 he was charged with drug possession and intent to sell.

He was also a former UFC fighter

Speaking to Celebrity Rehab with Dr Drew, she said: “I had the fame, I had the girls, I had the money, and I threw it away.”

Then in 2015 he was arrested for allegedly stabbing a man in Westlake, California, before he fled the scene.

The charges were dropped against him, but then in August a woman claimed that he stabbed her in the back, arm and leg

This was during an argument over a car, and he was sentenced to 270 days in jail and was then put on probation for five years.

However the star battled addiction and ended up using crystal meth

He was regularly smoking weed and taking cocaine

His ex wife and former model Loni Willison went missing for two years before she was found living on the streets.

The 37-year-old former fitness magazine cover girl was recently spotted eating pizza from a bin and sharing it with a squirrel.

She’s been homeless since 2016 and says she doesn’t want anyone to help her.

His ex wife Loni Willison still lives on the streets

“I haven’t got a cell phone. I’ve got food and I’ve got a place to sleep.

Boris Johnson to hit Putin and Lavrov with sanctions ‘imminently’, No 10 says

Common Symptoms and the Difficulty of Diagnosis

Common Symptoms and the Difficulty of Diagnosis