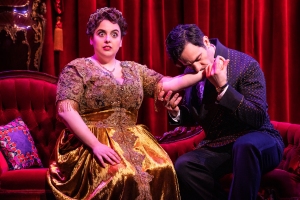 
Smartly sidestepping the obvious comparison from the start – the line-reading of “Hello gorgeous” sounds more conversational, less sing-songy than the one etched in our brains for all these decades – Broadway’s new Funny Girl revival doesn’t so much make a grand play for replacement as a peaceful offering for coexistence: The show that made Barbra Streisand a musical theater icon likely won’t do the same for its latest star, but neither is it cause for grumbling how-dare-shes.

Opening tonight at the August Wilson Theatre, Beanie Feldstein is, it turns out, a perfectly fine choice for this Funny Girl, which is not to say she’s perfect, but rather that she’s on equal footing with a just-above-average musical that has always been dominated by several excellent songs and a legendary breakout performance that lifted the show – and its plodding 1968 movie adaptation – well beyond the sum of its parts.

So memorable are those Jule Styne/Bob Merrill songs – the now-standards “People” and “Don’t Rain on My Parade,” most notably – that the first hints of their arrivals in the new staging directed by Michael Mayer get applause before Feldstein, as Fanny Brice, so much as sings a note. The fact that this amiable young performer does battle with a most fearsome ghost and survives with her dignity and our collective sense of relief intact should not be underappreciated.

With some revision and modernizing of Isobel Lennart’s book by Harvey Fierstein – not nearly enough revision, but more on that later – the Funny Girl revival struggles to make a case for the musical’s place in Broadway history without the performer who put it there in the first place, and that, I think, is a losing battle. But as a production that features several appealing performances (including one that might even be called a star turn, though not the one audiences expect), some rousing dance numbers that stand out among the rest, and, yes, credible renditions of those two or three knock-out numbers that reinforce the case for their inclusion in any Great American Songbook, this Funny Girl revival takes its place alongside the new hugely popular, if critically merely accommodated, The Music Man down the street.

Whether Funny Girl will follow in Music Man‘s box office success remains to be seen. There’s no larger-than-life star charisma her, certainly not on the level of Hugh Jackman (and nothing to equal the powerhouse vocal chops of Jackman’s co-star Sutton Foster). Feldstein, who made her Broadway debut in a supporting role in 2017’s Hello, Dolly!will delight her fans from the charming 2019 comedy film Booksmartand should at least mollify all but the most die-hard Streisand stalwarts. As a singer, she’s not the belter that Funny Girl so often needs – Feldstein’s vocal delivery can be reedy and, at times, slightly nasal – but her tones are clear and strong enough to give “People” its poignance and “Parade” its marching drive. Her “Nicky Arnstein” displays a natural comic timing that in the non-musical stretches can seem pushed.

Much has been made of Feldstein’s full-figured size and how it fits into Funny Girl‘s customary challenge to conventional standards of showgirl beauty – challenges made by both Brice and Streisand in their days – but the more important element is the necessary self-regard, confidence and knowingness that the Brice character (and her portrayer) must display. And here, Feldstein is at her best (even when the show occasionally lets her down). While she doesn’t have the vocal gifts that Streisand could employ to stake a claim on show-within-a-show stardom, Feldstein is no less convincing in her Fanny’s self-belief and determination. No one would dare rain on her parade.

Well, maybe a drizzle or two. Was it necessary to have Feldstein fall to the ground and roll downstage for the cheapest laugh in a show that has its share? Not even the possible period-correctness of a  Ziegfeld comedy bit in which Fanny plays a Jewish WWI doughboy with bagels hanging from his belt could justify that groaner (and Feldstein’s exaggerated, desperate mugging doesn’t help). The kettledrum sound when a wedding-dressed Fanny, sporting a comic pregnancy pillow, bumps into her fellow dancers seems more like a bad 1970s Sonny and Cher Show sketch than anything worthy of today’s Broadway stage.

Granted, those routines are meant to reflect Fanny’s vaudeville era (and, not incidentally, Streisand’s 1960s), but if a production is going to the trouble of hiring the great Fierstein to revise the book, why stop so short? Some of Fierstein’s apparent changes are welcome, as far as they go: He seems to have beefed up the role of Fanny’s lovestruck collaborator Eddie (Jared Grimes, delivering the show’s real star turn in a crowd-pleasing tap dance routine), and Fanny now comes across as a slight bit more assertive when standing up to her embezzling husband Nick Arnstein (Ramin Karimloo, doing his best in a stultifying role).

But a bit more assertive isn’t enough to bring Funny Girl fully and convincingly into the 21st Century. Fanny’s apologetic, doormat behavior with her weakling, money-stealing, manhood-challenged louse of a husband is tough to swallow, historically accurate or not, and Feldstein doesn’t display – or isn’t directed to display – a nuanced, gradual awakening of Fanny’s independence, her out-of-nowhere showstopping finale notwithstanding. And imagine what more subversive casting might have accomplished, if, say, a less conventionally handsome actor had been hired to play Nicky as a way of agitating Funny Girl‘s dated sexual politics and beauty hierarchies?

Okay, so that might be asking too much of a production that merely wants to entertain tourists with some comfort-food entertainment, but even there Funny Girl often undercuts itself. The egregious miscasting of Jane Lynch as Fanny’s mother Mrs. Brice does neither the show nor the actor any favors. Her Brooklyn-Yiddish accent comes and goes (so does Feldstein’s for that matter), she bears no resemblance in appearance or personality to the woman playing her daughter, and a curiously restrained delivery during what’s meant to be some of the musical’s most dramatic revelations provides her co-stars with little to play off. When Mrs. Brice breaks some very bad news to Fanny in the second act, she may as well be relaying word of lost luggage.

As for the show’s depiction of vaudeville razzle-dazzle, Funny Girl is helped immensely by the terrific Grimes and a solid ensemble of hoofers (Ellenore Scott is the choreographer, with show-stealing tap choreography by Ayodele Casel). Set designer David Zinn, whose recent work on Choir Boy, Boys In The Band and this season’s The Minutes were exemplary, here stumbles a bit, whether due to budget constraints or an idea that seemed better in theory than practice: The dingy brick streetscape facades of Fanny’s old neighborhood remain in view on either side of the stage throughout most of the show, which perhaps works as metaphor – you can take the girl out of Brooklyn etc. – but intrudes on the Ziegfeld-style pizazz that could have transported this Funny Girl to somewhere far more enchanting.