Behavioral scientists tried to get 690,000 pharmacy customers vaccinated. This friendly, if persistent, ‘nudge’ was most persuasive 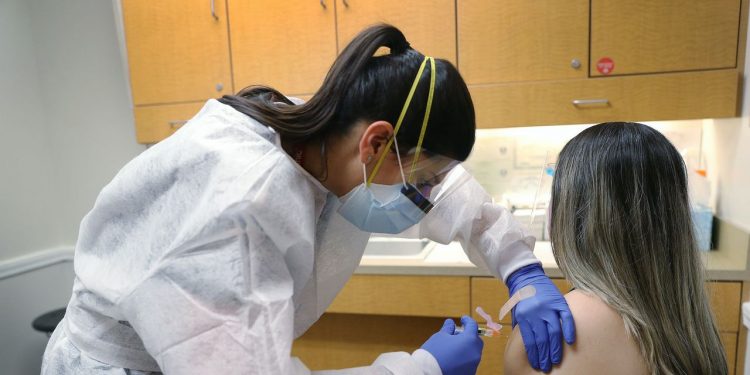 
How do you “nudge” more people to get vaccinated?

Public-health officials say it’s the clearest route to herd immunity, where the most vulnerable in the population are protected against COVID-19, the disease caused by SARS-CoV-2, and to stop the spread of potentially more severe variants.

Currently, less than 64% of the U.S. population is vaccinated against the virus — approximately 212 million people — and roughly 52% have received a booster shot, according to the latest data from the Centers for Disease Control and Prevention.

As we enter Year 3 of the pandemic, COVID-19 has killed 888,784 Americans. That toll is rising. Despite omicron being a relatively milder variant of COVID-19, cases and deaths continue to rise due to its contagiousness.

Deaths are now averaging 2,658 per day in the U.S., a 35% increase over 14 days, according to the New York Times tracker. In fact, daily deaths are now higher than the peak last fall when the more virulent delta variant was dominant.

This study of 689,693 customers from 4,700 Walmart pharmacies, published in the latest edition of the peer-reviewed journal Proceedings of the National Academy of Sciences, set out to discover the best way to “nudge” people to get vaccinated.

Using the flu vaccine as their subject, the researchers tested 22 different text reminders using a slew of behavioral science principles. These texts increased vaccination rates by an average of 2 percentage points (6.8%).

Their No. 1 method of persuasion was both persistent, yet friendly. It didn’t tell them what to do, but it did gently remind them that there was a shot with their name on it at their local pharmacy.

“The top-performing intervention included two texts three days apart and stated that a vaccine was ‘waiting for you,’” it found. “Forecasters failed to anticipate that this would be the best-performing treatment, underscoring the value of testing.”

These findings, the researchers wrote, “can potentially inform efforts by pharmacies and hopefully also providers and governments around the world in the ongoing campaign to encourage full vaccination against COVID-19.”

Saints interested in speaking with Eric Bieniemy for head coach position, could meet this weekend, per report