Hundreds of lives could be saved from prostate cancer if men lost weight, a major study suggests.

Experts from the University of Oxford looked at measurements of over 2.5million men.

Every five-point increase in BMI — about 2.5st (35lbs) for the average British man — was associated with a 10 per cent greater odds of dying of prostate cancer.

Five points is enough to take someone from being of a healthy weight to overweight, or overweight to obese.

The researchers estimate that bulging waistlines are responsible for 1,300 prostate cancer death in Britain each year. 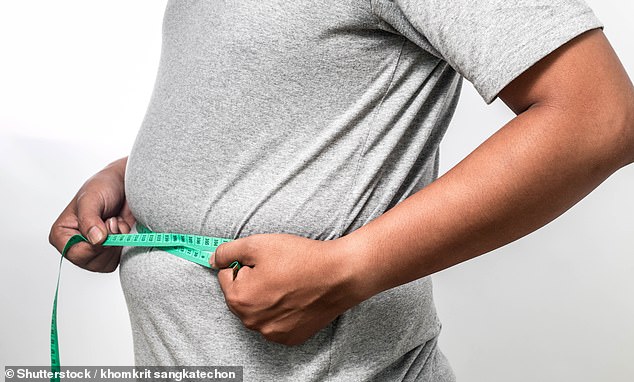 Every five point increase in body mass index (BMI) – equivalent to about 2.5 stones in the average British man – raises the risk of prostate cancer death by 10 per cent

Dr Aurora Perez-Cornago and colleagues said: ‘We found that men with higher total and central adiposity have a higher risk of dying from prostate cancer than men with a healthy weight.

‘Knowing more about factors that increase the risk of prostate cancer is key to preventing it.

‘Age, family history and black ethnicity are known risk factors but they are not modifiable, and so it’s important to discover risk factors that it is possible to change.’

Getting enough sleep is crucial to keeping weight off, study finds

Sleeping at least six hours a night is crucial to keeping your weight under control, a study claimed today.

Researchers from the University of Copenhagen in Denmark examined sleep duration and quality among nearly 200 obese adults for a year.

More than a third of UK and US adults sleep less than six or seven hours per night because of stress, screens and the blurring or work-life boundaries.

The study, presented at the European Congress on Obesity (ECO) in Maastricht, Netherlands, tracked 195 adults after an eight-week diet.

Participants had a BMI of between 32 and 43 before the start of the study and they lost 12 per cent of body fat, on average.

They were then monitored over a year, with accelerometers used to measure sleep before and after the diet and at weeks 13, 26 and 52.

Those sleeping more than six hours were better able to maintain improvements to their weight than those who slept for less than that amount.

Similarly, poor sleepers — measured with a self-rated questionnaire – increased their BMI score by 1.2 points after a year compared with good sleepers.

The academics found that around two hours of vigorous physical activity per week can help maintain better sleep.

Lead author Adrian Bogh, a biomedicine student, said: ‘It was surprising to see how losing weight in adults with obesity improved sleep duration and quality in such a short time, and how exercising while attempting to keep the weight off preserved improvements in sleep quality.

‘Also, it was intriguing that adults who aren’t sleeping enough or getting poor quality sleep after weight loss appear less successful at maintaining weight loss than those with sufficient sleep.’

She said several biological reasons for the increased risk have been proposed, although it may be that the disease is harder to detect in obese men, meaning it is diagnosed at a later stage when it is more difficult to treat.

Dr Perez-Cornago added: ‘More research is needed to determine if the association is biologically driven or due to delays in detection in men with higher adiposity.

‘In either case, our latest results provide another reason for men to try to maintain a healthy weight.’

The findings were presented today at the European Congress on Obesity in Maastricht, the Netherlands, and simultaneously published in the journal BMC Medicine.

Simon Grieveson, of Prostate Cancer UK, said: ‘This large-scale study suggests that being overweight is associated with an increased risk of dying from prostate cancer.

‘Whilst these results are compelling, more research is needed to fully understand the biological relationship between obesity and prostate cancer and, most importantly, how we can use this information to improve outcomes for men.

‘Maintaining a healthy weight can protect against many cancers, but it is important to remember that prostate cancer can affect men of all shapes and sizes.

‘Men over 50, black men and men with a family history are at highest risk of the disease and should speak to their doctor if they have concerns.’

Researchers tracked medical records of the men, for an average period of around 12 years.

Men were aged 40 to 69 and had not been diagnosed with cancer before the start of the study.

Some 661 died of the disease by the end of the follow-up period.

Their BMI scores, body fat percentages, waist circumferences and waist-to-hip ratios were recorded to see how these affected cancer development and severity.

Using statistical analysis, the team found having a higher waist circumference and waist to hip ratio increased the risk of dying with prostate cancer.

Those in the top quarter for both those measurements saw around a 25 per cent greater risk of dying with the disease than those in the lowest quarter.

Every extra 10cm (3.9 inches) on a man’s waist increased his odds of dying from prostate cancer by 7 per cent.

But having a higher body fat percentage did not have any effect on the risk of death, the data showed.

A separate study presented at the congress claimed sleeping at least six hours a night is crucial to keeping your weight under control.

Researchers from the University of Copenhagen in Denmark examined sleep duration and quality among nearly 200 obese adults for a year.

More than a third of UK and US adults sleep less than sixth or seven hours per night because of stress, screens and the blurring or work-life boundaries, studies have shown.

Mysterious liver illness in kids continues to spread. N.J. parents should look for these signs. – NJ.com