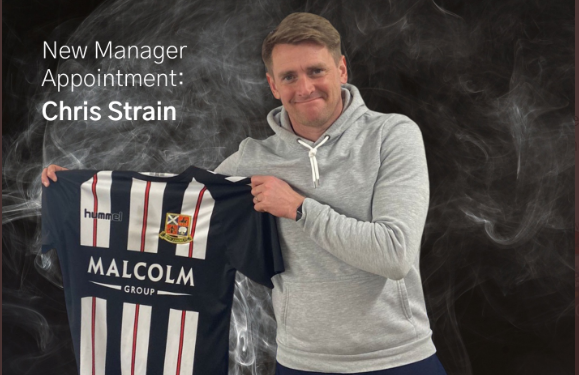 Coming into replace the ex-Auchinleck Talbot man is Chris Strain – who was relieved of his duties at Kilwinning Rangers only 11 days prior to Young’s dismissal.

Strain had been in his previous role at Kilwinning Rangers for almost eight years before the club decided to let him go.

He left with the Buffs sitting fifth in the West of Scotland Premiership – a position they remain in now.

Strain will be assisted by Beith legend Kevin MacDonald, as his appointment as assistant manager was also confirmed by the club.

Beith confirmed his appointment earlier today, May 17, with a statement on social media.

They said:”Beith Juniors are delighted to announce Chris Strain as our new Manager.

“Chris will join the Club with immediate effect and will be joined by Mighty legend Kevin MacDonald. All at the Club are excited to welcome both Chris and Kevin and can’t wait for this new era to begin.”

Incoming boss Strain added:  “I’m delighted to be given the honour of managing the Club and I’m sure that we will be successful.

“I’m really looking forward to working with the Players and will be making plans to meet all of them face to face in the next week or so.

“My immediate plans will be to get to work on building a squad for next Season so that we are ready to go when we start.”

The Bellsdale Park side’s season came to a conclusion at the weekend when they were defeated 3-2 by Glenafton Athletic.

However, they’d secured their top flight status in their previous fixture, a 3-1 midweek win over already relegated Cumbernauld which lifted them onto 54 points – with 52 the necessary number to ensure safety.

Beith collected seven points from their five managerless games to confirm their position in the West of Scotland’s top league for next season.

Strain will have the opportunity to face his old side, and his own replacement David Gormley, when the two sides face off in the league next term.