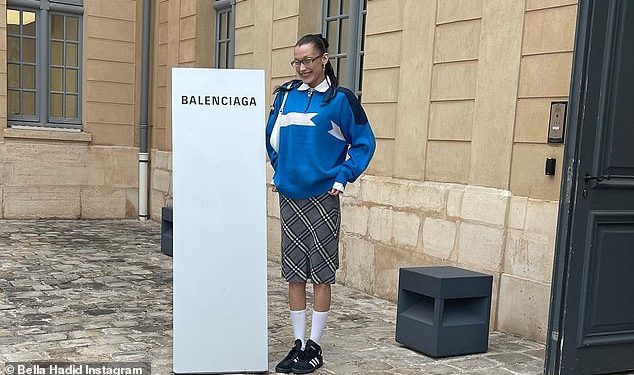 By Alesia Stanford For Dailymail.Com

Bella Hadid took her Instagram followers on a ‘what I do in a day’ pictorial, sharing a series of behind the scenes shots from her time in The City of Light earlier this month.

She called the post ‘a day in Paris’ as she roamed around the city between her various gigs on the catwalk. 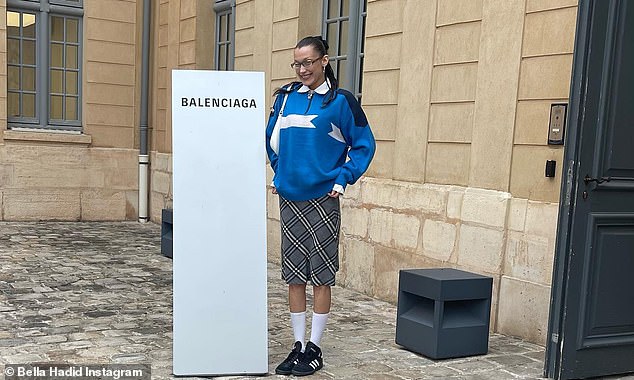 A day in Paris: Bella Hadid took her Instagram followers on a ‘what I do in a day’ pictorial, sharing a series of behind the scenes shots from her time in The City of Light earlier this month

She completed the the look with black sneakers, white socks, glasses and hoop earrings.

The former model of the year styled her long brown hair in a ponytail with multiple braids.

Details from the adventure include taxi rides through the city, visiting the fashion house of Balenciaga, and trying on clothes, including a vintage Lucky biker jacket. 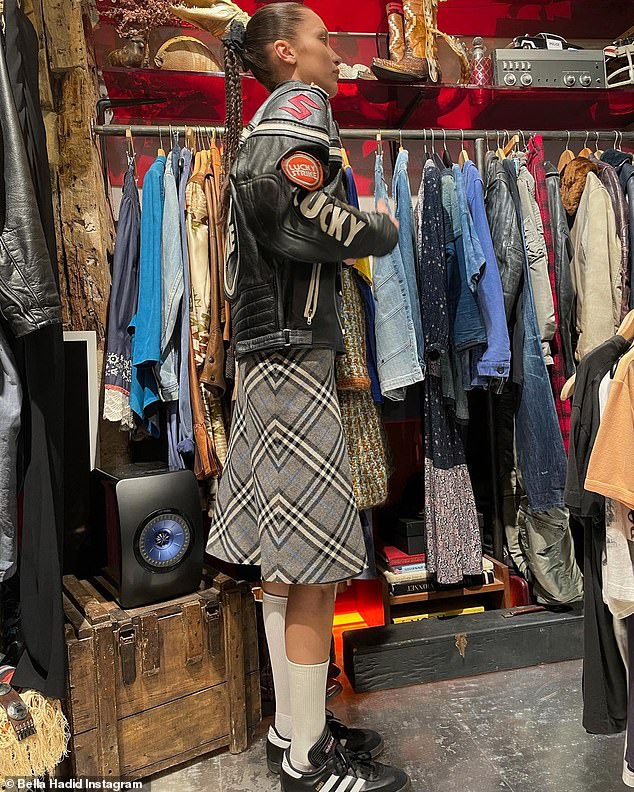 Shopping:  The former fashion design student tries on what looks like a vintage Lucky biker jacket.  Bella has revealed she used to shop for clothes at flea markets as a teen 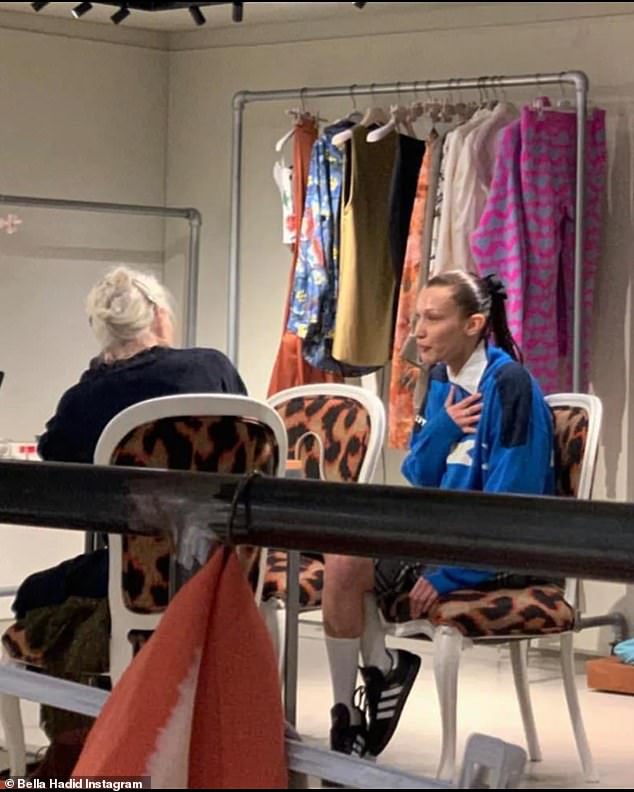 Candid:  The pictorial was uploaded days after an intimate profile of the runway regular was released in Vogue magazine.  Bella was candid about suffering from mental health struggles, including anxiety and depression

The former design student has said she developed some of her individual style by frequenting flea markets in her native Southern California, where should would shop for vintage clothes.

Lunch was the Parisian version of fast food, a sausage or hot dog with mustard on a French roll.

Her followers gravitated toward the inside look at Bella’s life on the road with more than one million likes garnered in mere hours. 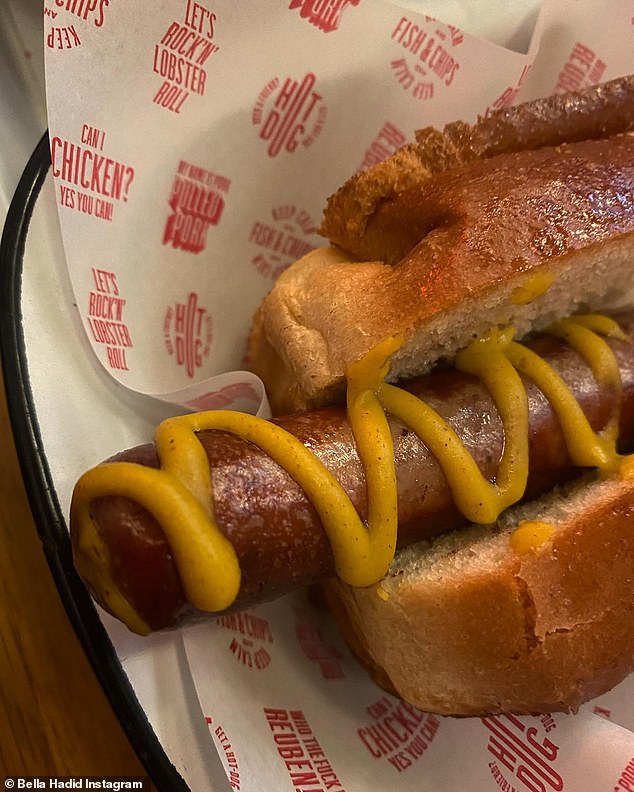 Quick lunch: The former model of the year enjoyed the Parisian version of fast food while sharing her day with followers, sharing a picture of a sausage or hotdog with mustard on a roll. Bella said she has suffered with eating issues throughout her life

In a profile piece, the daughter of The Real Housewives of Beverly Hills star Yolanda Hadid, spoke candidly about her struggle with depression, burnout and anxiety.

Bella said her strong work ethic and her habit of people-pleasing contributed to her mental health issues. 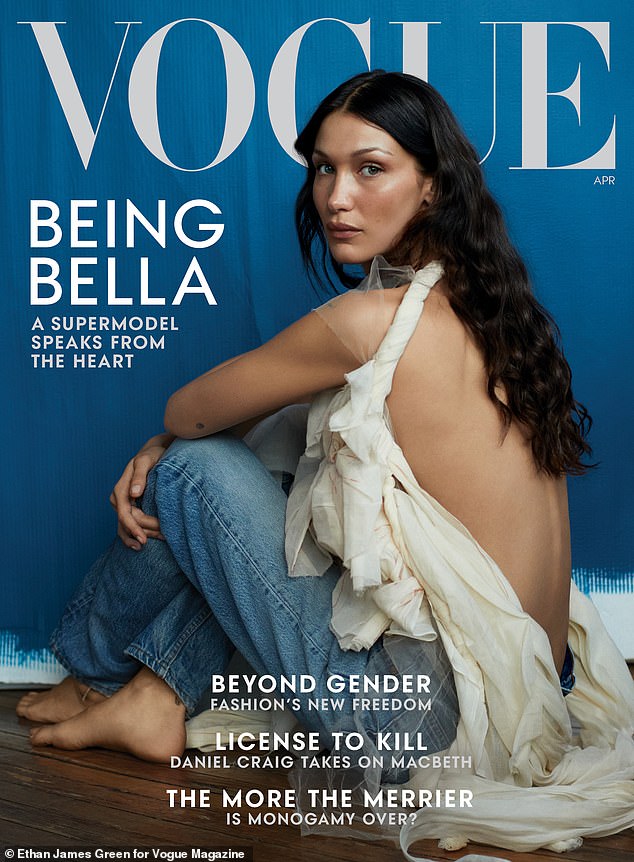 In the profile, the model revealed she checked herself into a Tennessee treatment facility for more than two weeks where she received talk therapy and medication.

Bella also has revealed she suffers from chronic Lyme disease. The disease, which can cause brain fog and exhaustion, may have contributed to her psychiatric symptoms. In the article, the fashionista revealed she had a nose job at age 14. A decision she now regrets.

The catwalk star has said she’s moving forward with her life, learning to say ‘no’ and focusing on various commitments in and out of the fashion world.  Bella recently announced she would be donating some of her fashion week earning to charities helping Ukrainians suffering in the aftermath of the Russian invasion. 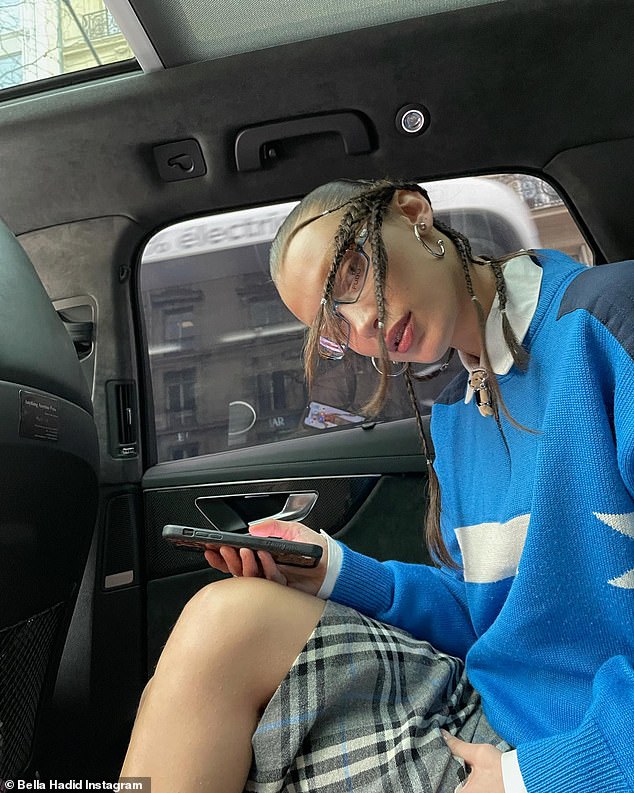 Behind-the-scenes: Her followers gravitated toward the inside look at Bella’s life on the road with more than one million likes garnered in mere hours

The ACCC’s Taking Meta To Court Over Scam Facebook Ads

The ACCC's Taking Meta To Court Over Scam Facebook Ads