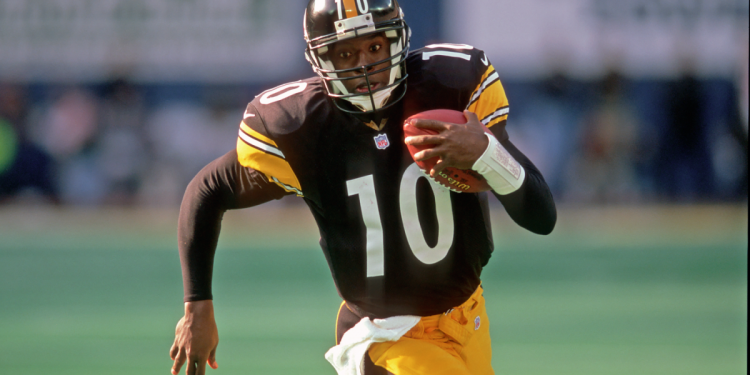 It’s been well-documented that the Steelers did not win a Super Bowl in the years between Terry Bradshaw’s retirement and Roethlisberger’s rookie season. Pittsburgh fielded several very good teams during that timespan, with the 1995 team reaching the Super Bowl. But they were unable to win “one for the thumb” until Roethlisberger arrived, which makes his retirement even tougher to swallow for Steelers fans who are hoping that it doesn’t take another 20 years to find another championship-level quarterback.

Miller failed to make it through one game before losing his starting job. Pittsburgh’s quarterback to start the 1996 season, Miller went 9 of 17 with 83 yards in the Steelers’ season-opening loss to the Jaguars. Miller, who was pulled after the third quarter of that game, threw just eight more passes for the remainder of the season, with each of those passes coming in mop-up duty during a Week 9 blowout win over the Rams.

A career backup, Graham won the starting job in Pittsburgh coming into the 2000 season. But he was quickly benched following the Steelers’ 0-3 start that included zero touchdown passes and an ugly loss to a Browns team that won five games over a two-year span. Kordell Stewart returned to the starting lineup, where he led the Steelers to a 9-7 record and a near playoff berth. Graham did make two more starts later in the season (both wins), but he went a combined 16 of 45 passing in those games as the Steelers’ defense shut out the opposition in both games.

A temporary solution following Neil O’Donnell’s departure in free agency, the 34-year-old Tomczak provided solid yet unspectacular play for the ’96 Steelers, who went 10-6 while winning the franchise’s third consecutive AFC Central division title. He had his moments (including throwing the game-winning touchdown pass against the Dolphins on “Monday Night Football”), but the former Bears quarterback spent most of the season handing the ball off to Jerome Bettis, who ran for 102 yards and two touchdowns in Pittsburgh’s 42-14 blowout win over Indianapolis in the wild card round.

An injury to Bettis, a heavy fog and a talented Patriots team overwhelmed Tomczak and the Steelers in the divisional round. Tomczak threw for just 110 yards and two interceptions in a 28-3 loss.

Malone posted a 21-23 regular season record as Pittsburgh’s starting quarterback from 1984-87. His first season as the Steelers’ starter was his most successful campaign, as he went 6-3 during the regular season while helping Pittsburgh capture an AFC Central division crown. He threw a touchdown pass in helping lead Pittsburgh to a 24-17 upset win over the Broncos in the divisional round of the playoffs before tossing three touchdowns and three interceptions in the Steelers’ 45-28 loss to Dan Marino’s Miami Dolphins in the AFC Championship.

While he provided temporary stability, Malone’s penchant for throwing interceptions was one of the main reasons why the Steelers did not have more success during his time under center. Malone also endured several injuries that significantly limited his availability.

A former first-round pick and XFL MVP, Maddox went 7-3-1 as the Steelers’ starter after replacing Kordell Stewart three games into the 2002 season. In Pittsburgh’s wild card win over Cleveland, Maddox threw for 429 yards and three touchdowns while helping the Steelers come back from a 17-point deficit.

Turnovers and the league’s 31st ranked rushing attack largely contributed to Maddox and the Steelers going 6-10 in 2003. But a rare losing season gave the Steelers the opportunity to select Roethlisberger with the 11th overall pick. Roethlisberger relieved an injured Maddox during Pittsburgh’s Week 2 loss to the Ravens. Roethlisberger never relinquished the starting job, as Maddox spent his final two NFL seasons as Big Ben’s backup.

Malone’s successor posted a 28-29 record as Pittsburgh’s starting quarterback. His best season was in 1989, as he and the Steelers made the playoffs after losing their first two regular-season games by a combined score of 92-10. Brister helped Pittsburgh stun the Oilers in the AFC wild card round in what was Chuck Noll’s final playoff win as the Steelers’ coach. A dropped pass in Denver the following week prevented the Steelers from upsetting the eventual AFC champion Broncos in the divisional round.

Brister spent most of the second half of his career as a backup after Neil O’Donnell replaced him as Pittsburgh’s starting quarterback. He won two Super Bowls as John Elway’s backup in the late ’90s, winning all four of his starts in relief of Elway during the 1988 season.

A Pro Bowler in 1992, O’Donnell won 39 of his 61 regular season starts as the Steelers’ starting quarterback from 1991-95. O’Donnell helped the Steelers win three division titles as well as the 1995 AFC championship during his time under center. He led a game-winning drive that included a fourth-down completion to Andre Hastings and a 37-yard completion to Ernie Mills during Pittsburgh’s 20-16 win over Indianapolis in the ’95 AFC Championship Game.

After two seasons as a running back/quarterback/receiver, “Slash” was given the keys to the Steelers’ offense in 1997. It was far from a smooth ride, but Stewart often got the Steelers where they needed to go while providing exciting moments along the way. He led big comebacks over the Ravens and Broncos during the ’97 regular season and helped Pittsburgh go 3-0 in overtime games. Stewart had two five touchdown games that season while becoming the first quarterback in league history to throw for at least 20 touchdowns and run for at least 10 more.

Stewart was benched after he and the Steelers’ slow start to the 2002 season. Following an injury at quarterback, Stewart won both of his late-season starts while helping the Steelers clinch a division title. Stewart, who finished his career with the Ravens, posted a 46-29 record as the Steelers’ starting quarterback.

Masayoshi Son and Marcelo Claure: inside the expensive divorce at SoftBank

What's Putin planning in Ukraine standoff? TikTok might have the answer