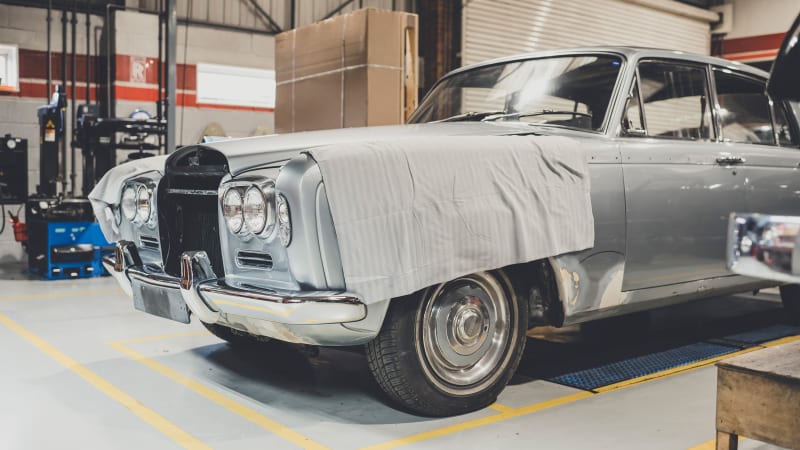 Bentley has shifted one of its on-going restoration projects into high gear. Found after spending decades undriven, the first T-Series sedan built is being brought back to life by the British company’s apprentices and specialists and it should be back on the road by the end of 2023.

Manufactured on September 28, 1965, about a week before the model’s official unveiling at that year’s Paris auto show, the oldest T-Series was finished in Shell Gray with a blue interior. Bentley initially kept the car and used it as a test mule around the world. The big sedan later ended up in private hands with a blue California plate and a “Beverly Hills Motor Cars” plate frame attached to its rear end. It was last registered in 2015, according to the sticker on the plate, though Bentley notes that it has spent decades off the road and in storage.

Bentley bought the car and shipped it back to its headquarters in England. It started tearing down the sedan in October 2016: A group of apprentices removed the exterior trim and began preparing the body for new paint, but the project stalled. See, this happens even to luxury carmakers — don’t feel bad about the Fox-generation Mustang lingering in the back of your garage. For collectors, projects tend to get delayed when, for better or worse, life happens. Bentley ran into different hurdles: It put the T-Series on the backburner to launch its current range of models, including the Flying Spur and the Continental GT. Nearly six year later, the firm is returning to the garage to wrap things up.

It sounds like the T-Series was stored indoors, and being out of the elements might be its saving grace. Mechanics managed to fire up the 6.2-liter, 225-horsepower V8 engine, and they gave it a clean bill of health; the automatic transmission is in good condition as well. There is still some body work that needs to be completed and the interior is almost completely taken apart. Bentley estimates that the project will take approximately 18 months, so it should be finished by late 2023, and it plans to add the car to its Heritage Collection when it’s done.

While it’s a relatively obscure classic in 2022, the T-Series remains a hugely important part of Bentley’s heritage. It was the first Bentley that used unibody architecture (its predecessors featured body-on-frame construction), a move that was significant because it signaled the company’s shift away from being a major supplier to coachbuilders, and it was fitted with rubber subframe mounts called Vibrashock designed to keep road noise and vibrations out of the cabin. It was also quick for the time: it took 10.9 seconds to reach 62 mph from a stop.

Bentley built precisely 1,868 units of the first-generation T-Series. However, the V8 engine that powered the sedan remained in production until recently. Called “L-Series” internally, it went through countless evolutions over a 61-year run and ended its career in the Mulsanne.