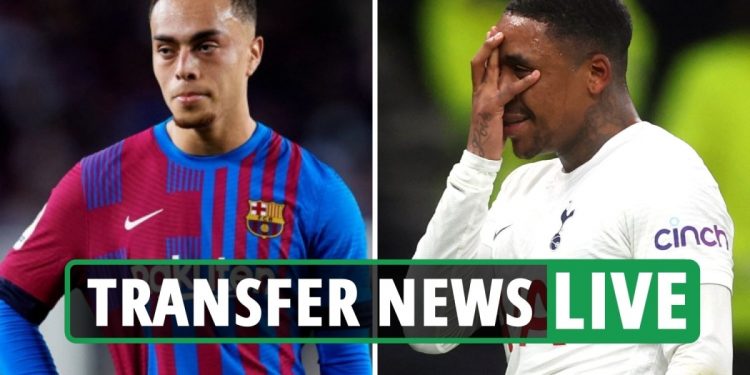 The FA Cup draw for the competition’s fourth round has been completed, and it doesn’t include Arsenal.

The Gunners suffered a shock elimination at the hands of Championship side Nottingham Forest, who won 1-0 at the City Ground.

Forest are now going to face Leicester at home, whereas Chelsea, Tottenham, Liverpool and Manchester City will square off against Plymouth, Brighton, Cardiff and Fulham respectively.

Manchester United and Aston Villa face off today and the winner will take on Middlesbrough at home.

Meanwhile, Barcelona ace Sergino Dest may be available for €40million (£33.4m) in the January transfer window.

That is according to El Nacional, who claim that Dest has been linked with Arsenal as well as Chelsea.

The west Londoners see the USA international as the perfect fit to fill in for the injured Ben Chilwell, who has been ruled out for the rest of the season.

And United great Cristiano Ronaldo has held crisis talks with his agent Jorge Mendes about his future at Old Trafford.

Sunsport understand Ronaldo is frustrated by how the Red Devils are performing.

The Portugal international is also disillusioned with interim manager Ralf Rangnick’s tactics and style of football.

A source close to Ronaldo revealed: “Cristiano is very concerned about what is happening at United. The team is receiving a lot of criticism and he knows he is regarded as one of the leaders.

“There are quite a lot of problems and Cristiano is feeling the pressure and is very stressed by the situation. He desperately wants his United move to be a success, but he is starting to recognise that winning trophies with the current set up could be a real struggle.

“Jorge came to see him and they spent time chatting through how things are going, what they think are the problems, how they might be solved and what the solutions may be. Nothing has been ruled out.”

The Canaries want around £15million for the midfielder, whose contract expires in the summer.

But if no club meets his asking price it is believed that Norwich intend to trigger the option to keep the former England Under-21 international for another year.

The 23-year-old fell out of favour under former manager Daniel Farke after failing to regain form following back and Achilles injuries.

Which job commands 50 per cent salary premium in 2022? The key is to brush up on environmental, social and governance strategies

Which job commands 50 per cent salary premium in 2022? The key is to brush up on environmental, social and governance strategies