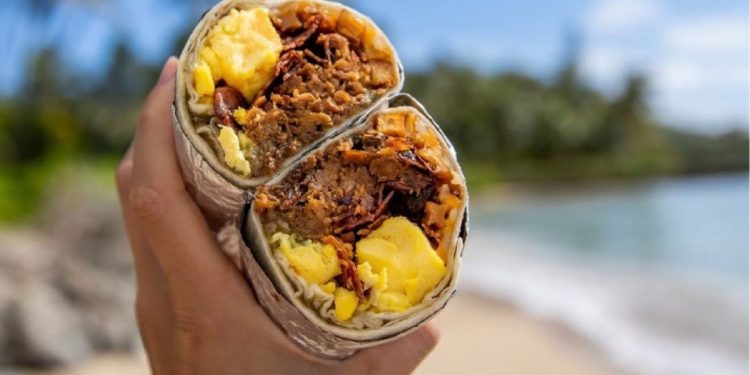 
Despite gastronomical origins in Mexico, the burrito has been a beloved mainstay on menus across the United States for decades. The specifics on how burritos first made their northern journey aren’t well known, but it’s believed they arrived via migrants in the early-mid-20th century. The first burrito to officially grace a menu here was at El Cholo Spanish Café in the 1930s.

Back then, burritos were made the traditional Mexican way—much slimmer with just a few basic ingredients. In true U.S. fashion, those OG burritos were eventually supersized into the mission-style burritos you can order today from small family-run shops to burrito behemoths like Chipotle and Qdoba.

Nowadays you won’t find a corner of the country where burritos aren’t served and enjoyed. In fact, the first Thursday of every April is designated as a celebration of the beloved foodstuff. You might not get the day off from work on National Burrito Day, but what better excuse to go grab one for breakfast or lunch (or both)?

The basics of a quality burrito include a fresh flour tortilla, a protein, and some choice fixins (don’t forget the hot sauce!). That said, tons of establishments around the U.S. have put their own unique spin on it. From breakfast burritos to French fry-filled creations and Filipino-inspired flavors, these are the burritos we’re craving on National Burrito Day (and pretty much every other day).

California-style burritos in New York? It all started with a San Diego native who moved from the West Coast to the East Village, bringing French fry-stuffed burritos along for the ride. This small-but-mighty counter provides New Yorkers with designated burrito options for every meal of the day, and a chance to try fries, cheese, pico de gallo, and either pollo asado, carnitas, or carne asada married together in one delicious flour tortilla.

For a distinctly Hawaiian take on the burrito, there’s no better place than Kono’s Northshore, which has three locations dotted around the island of Oahu—and a new location in Las Vegas. They’re known for their 12-hour slow roasted Kalua pork, which is traditionally cooked in an underground oven called an imu. A trip to Kono’s isn’t complete without one of their “bombers,” a burrito made with a warm flour tortilla stuffed with their signature pork, guava barbecue sauce, rice, cheese, and grilled onions. Breakfast versions are available in the morning, too, with bacon, eggs, and potatoes.

The famed California burrito combines two fast food staples—burritos and French fries—in one epic wrap. These mad-scientist creations can be found nearly everywhere in the state and now beyond, but it’s a particular specialty of San Diego. At family-owned local chain Sayulitas, the California burrito is taken one step further to incorporate the flavors of Filipino cuisine (think mouth-watering pork longanisa and queso lumpia). The added bonus here: Sayulita’s is home to the Hot Cheetos Burrito. Say no more.

One of Austin’s favorite local burrito chains is truly a choose-your-own-flavor adventure. Cabo Bob’s offers one of the most customizable burrito experiences—featuring four different tortilla flavors, six proteins, five kinds of rice and beans, a dozen salsas and sauces, and 16 toppings. The sheer number of options makes it perfect for meat lovers and vegans alike. Cabo Bob’s is also known for using super premium ingredients and making each of their tortillas fresh to order.

With multiple locations around the city that keep a constant line, Coyo arguably creates some of Miami’s favorite Mexican food. As its name suggests, the tacos are obviously incredible, but locals also flock to this local chain for incredible burritos stuffed with anything from carne asada to shrimp. In true Miami fashion, the Wynwood location is even home to a speakeasy-style bar, so you can dance the night away with a burrito in hand.

Leave it to Portland to play host to a burrito spot operating out of a vintage 1950s Airstream trailer. Quirky murals and greenery add to the vibe, but Portland locals flock here for tasty burritos filled with guajillo-ancho pulled chicken or crispy carnitas topped with an arbol chile crema. For those in the know, adding seared veggies is the move.

The American Southwest is known for having its own incredible renditions of Mexican dishes. Bonfire Burritos is a prime example. Operating out of Golden (in the Denver area), the delicious restaurant draws daily crowds flocking to experience its famed breakfast burritos. Regulars can’t get enough of the “Chupacabra”—packed with a trio of chorizo, sausage, and bacon. Needless to say, come to Bonfire on an extremely empty stomach.

No burrito list is complete without a great smothered option—and Tia Sophia’s is here for exactly that reason. This family-owned eatery in Santa Fe is beloved for its superior breakfast burritos, which you can order smothered in red or green piquant chile (for the indecisive, try fifty-fifty or Christmas style) topped with melty cheese. Protein choices include bacon, sausage, or ham, and the restaurant offers chorizo on Saturdays. It makes sense that Tia Sophia’s breakfast burrito reigns supreme. According to burrito legend, they’re the first establishment to coin that term on their menu back in 1975.

In a world full of super-stuffed burritos, sometimes you just need to return to the classics. Al & Bea’s Mexican Food in Boyle Heights is a legendary window with perhaps the best bean-and-cheese burrito in town. There aren’t any fancy additions to hide behind here—just simple yet superior ingredients that have kept Angelenos coming back since 1966. When you’re ready to up the heat a notch, go for bean and cheese with green chile.

San Francisco is where the mission burrito (famous for its girth) was first invented. While there are now a wealth of spots in the Bay City to indulge, only one of them creates what once prompted chef David Chang to say, “It might be the best burrito I’ve ever tasted.” Many SF locals agree. San Francisco visitors making the usual rounds would be wise to add El Castillito’s flavor-stuffed “super” burrito to their must-try list. Al pastor lovers, you’re welcome.