Biden confronts the limits of his executive power 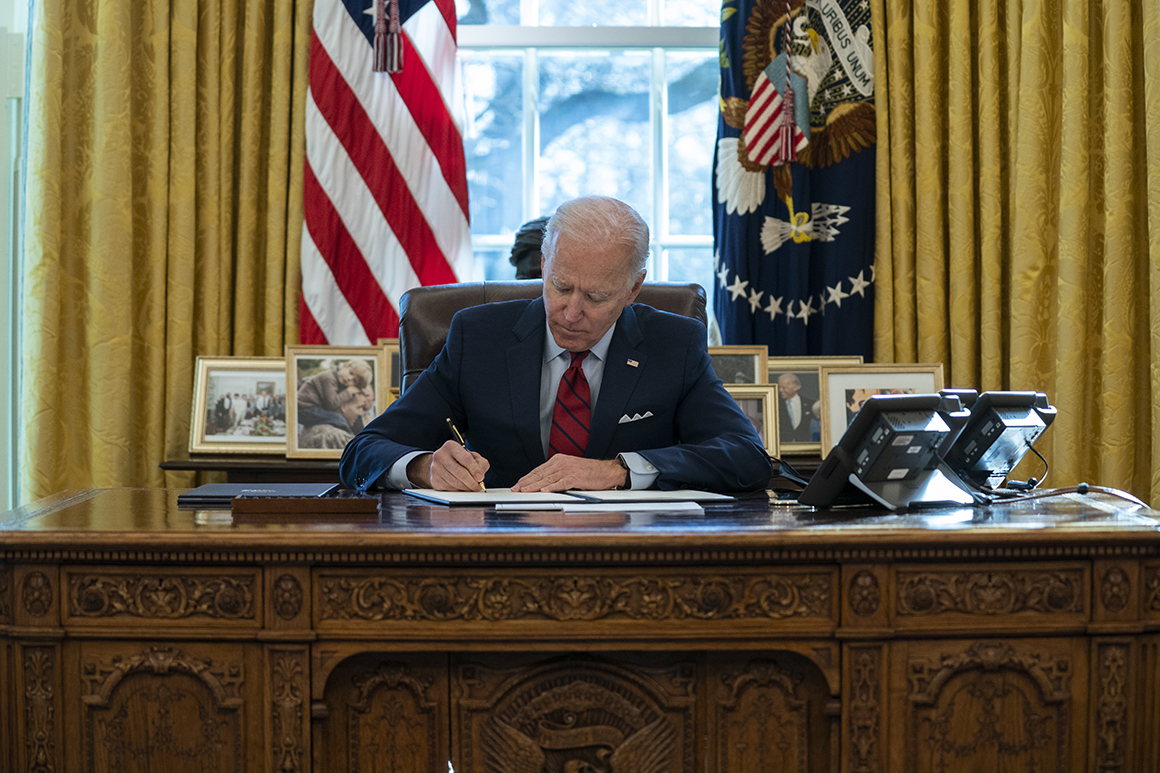 Biden wants $1.9 trillion. Republicans want a lot less. POLITICO’s Victoria Guida breaks down what would really save the Covid economy — and why we shouldn’t care too much about the price tag … for now.

Biden “can’t press on the accelerator by himself,” Zandi said. “He desperately needs Congress to kick into gear here.”

Biden’s team is clear-eyed about the fact that executive orders alone will do little to stem the crisis or reverse the damage. But they view them as a step in the right direction while they pressure lawmakers to do more.

“We are acting where we can, but there are 30 million of our neighbors going hungry,” Brian Deese, the director of the White House’s National Economic Council, wrote on Twitter. “Congress needs to act decisively to stem this crisis.”

And so far, at least, it remains uncertain how much lawmakers are willing to spend and how quickly they will be able to act.

Biden has been urging lawmakers to move on his American Rescue Plan that includes hundreds of billions of dollars for coronavirus vaccine distribution, $1,400 stimulus checks to working Americans and expanded unemployment benefits, among other policies. But members of both parties have criticized the package as too expensive and, especially for Republicans, too close on the heels of the $900 billion relief bill passed in December.

A group of 10 Senate Republicans, led by Sen. Susan Collins of Maine, has been working on a less costly relief bill focusing on spending $160 billion on vaccines, testing, treatment and personal protective equipment. On Sunday, Biden agreed to have the group visit the White House early this week for a “full exchange of views,” though press secretary Jen Psaki indicated that the president’s focus on a large-scale relief package had not changed.

It’s still likely to be weeks or even months, then, before a new bill ultimately makes it to Biden’s desk for signature. And the delay has sparked further discussion over what the president could do on his own to help the economy.

A core goal of Biden’s executive orders has been to marshal the federal agencies to ensure that aid that has already been allocated is flowing as smoothly as possible through programs that already exist. That includes asking the Agriculture Department to recalculate how it doles out food stamps; directing the Labor Department to work out issues that can block unemployment benefits; and calling on the Treasury Department to ensure that more Americans who are eligible to receive stimulus checks are able to get them.

“Stretch the envelope, make the programs reach as many eligible people as possible, and get rid of the bureaucratic hurdles — that’s a big part of what they can do through executive action,” said Andrew Stettner, a senior fellow with the Century Foundation, a progressive think tank.

Still, he says, “To ramp up the recovery, they need investments from Congress. They need changes in the law.”

To be certain, given the nature of the recession and how it’s tied to the pandemic, any steps to tackle the coronavirus will in turn stimulate the economy, because they could lead to more Americans leaving their homes, returning to work and spending more money.

“The largest impact that the administration can have on the economy is the vaccination rate,” said Constance Hunter, the chief economist at KPMG.

Much of that effort, too, is dependent on Congress passing more money to fund vaccine distribution. But Biden has also signed an executive order to invoke the Defense Production Act to increase the supply of all materials needed to get vaccines into arms, which could ease the process as well.

He could also work with Treasury to postpone the income tax filing deadline beyond April 15, as President Donald Trump did at the start of the pandemic last year, or to “waive or change or alter certain tax liabilities,” Stettner said.

“People are looking at that as an example of ways you could stimulate the economy even if you don’t have congressional action,” he added.

While he cannot spend new money without Congress’s help, Biden could play around with funding that has already been allocated for other purposes. Trump signed an executive order late last year to use a combination of disaster relief funding and state dollars to boost payments for unemployed workers. While it did work for a few weeks, the money quickly ran out — an issue Biden would run into as well if he tried to divert funds from elsewhere to be used for economic relief.